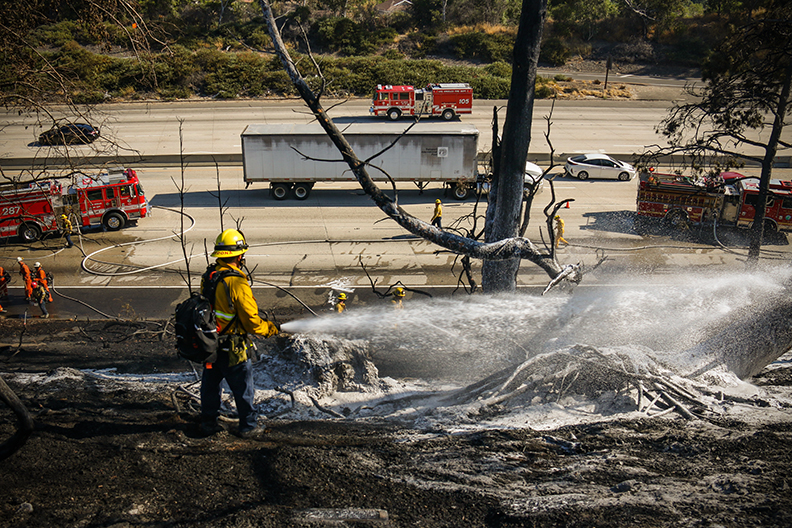 A LAFD firefighter sprays a chemical foam to prevent the fire from spreading further in Porter Ranch, Calif. on Saturday, Sept.4, 2020.

Five houses were in immediate danger from the Amigo Fire, which caused evacuations and road closures in Porter Ranch on Saturday.

With multiple fires happening across the San Fernando Valley, Ortiz expressed the importance of attacking these fires quickly, before they get out of control. In total, there were 135 firefighters from L.A. City, two crews from L.A. County’s Holton Conservation Camp — a program where inmates can work as firefighters — and five helicopters.

“With these fires we’re seeing, we are hitting them quick and hard with a lot of assets,” Ortiz said.

Michael Guerra, an inmate who is a part of the program, expressed the difficulty working in the 110 degree heat.

“It’s hot, really hot, but I like the work,” Guerra said.

This is Guerra’s second and final season with the program. He said he is planning on joining the Ventura Fire Department when he finishes his sentence.

While not everyone in the program goes into a career in firefighting, the crews were an important addition as they supported LAFD on Saturday, cutting away fresh vegetation on a steep embankment north of the 118 Freeway.

The fire burned parallel to the 118 Freeway, forcing the eastbound traffic to funnel into one lane.

The cause of the fire is under investigation.