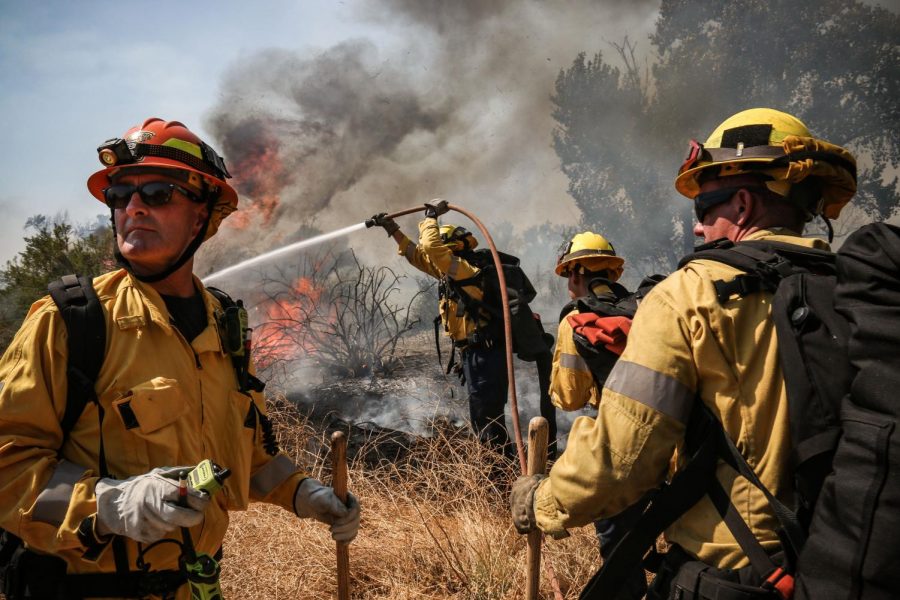 LAFD crews work to slow the spread of the fire in the Sepulveda Basin.

Roughly 20 acres of dry brush caught fire in the Sepulveda Basin on Sunday, shutting down the northbound 405 Freeway entrance on Burbank Boulevard.

No structures were damaged. However, the Donald C. Tillman water reclamation plant and Japanese garden on Woodley Avenue were threatened. Animals, such as bunnies, were seen running from the flames.

The record-breaking 114 degree temperature made the fight difficult for firefighters, who were often refilling their hydration packs with water.

There were over 100 Los Angeles Fire Department firefighters assigned to the scene, with at least 3 helicopters assisting from above. It took over three hours to bring the fire to 100% containment.

The aggressive water drops from air support allowed crews on the ground to create lines to break the flames. The flames were also broken by roadways and streets, according to LAFD officials.

LAFD Station 73 from Reseda works to create a line in the Sepulveda Basin Fire. pic.twitter.com/MnC1cgQHpf

This fire fight was one of two in the San Fernando Valley today, as another brush fire broke out near the Hansen Dam at the same time. That five-acre brush fire took 43 minutes for 62 LAFD firefighters to contain, according to the LAFD report.

The cause of both fires are under investigation.