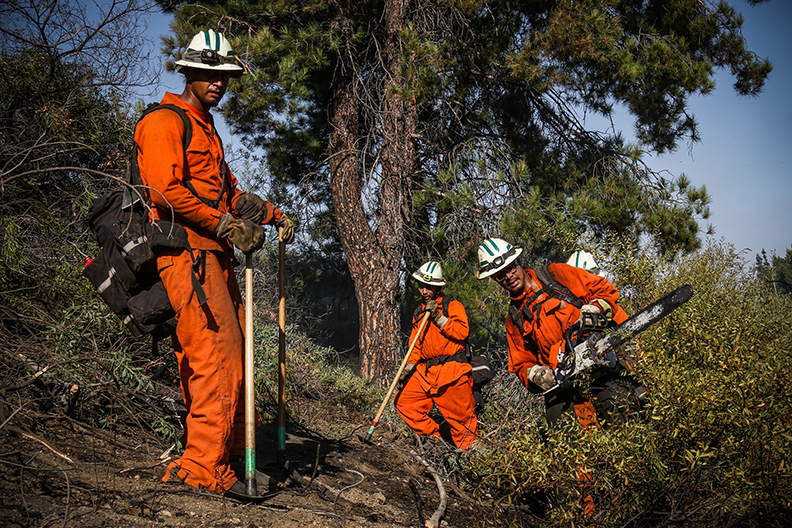 A group of inmate firefighters clear a line to prevent further fire spread during the Amigo Fire in Porter Ranch, Calif. on Sept. 5, 2020.

The California Senate approved a bill on Aug. 31 that will allow nonviolent offenders who volunteer in fire camps as inmate firefighters to get their records expunged and become eligible to serve as firefighters once released.
The bill was passed in midst of the state’s wildfire season and modified operations to slow the spread of COVID-19, as well as widespread calls for the early release of inmates to prevent outbreaks in jails.
Under current California legislation, inmate firefighters are unable to seek employment at fire stations after their sentence because of their criminal records. AB 2147 will allow them to work professionally as firefighters after the end of their sentence.
Assemblywoman Eloise Gómez Reyes (D-San Bernardino) introduced AB 2147 in February. The bill states that inmates who successfully completed the California Conservation Camp Program should be considered for employment.
Through the California Conservation Camp, inmate firefighters receive the same entry-level training as the seasonal firefighters from the California Department of Forestry and Fire Protection, also known as Cal Fire. Inmate firefighters respond to emergency operations such as fire and floods, assist with sandbagging, clearing brush and fallen trees. When not fighting fires they maintain parks, and reforestation.
There are approximately 3,100 inmates working at 43 conservation camps in 27 counties in California through the Conservation Camp Program. About 2,200 of those inmates are fire line-qualified, meaning they are allowed to do actual firefighting work such as fire line construction and brush clearing, according to Cal Fire spokesperson Samantha Jew.
“A criminal conviction should not be a life sentence that prevents someone from ever being able to start a career and turn their life around and to make their community and this state a better place,” Reyes said in a press release. “This particular group of people have made mistakes, but during their incarceration have demonstrated their commitment to rehabilitation through their participation in the inmate fire crew program which is not an easy task.”
The bill also allows former inmates to be eligible to apply for an EMT certification; the current California law does not allow anyone with a criminal record to acquire.
The California Department of Corrections and Rehabilitation declined to comment on the bill, but Information Officer Aaron Francis stated that many former incarcerated firefighters work for Cal Fire, private municipal fire districts and federal hotshot crews.
Lynne Tolmachoff, a spokesperson for Cal Fire, declined to comment on the pending legislation.
The bill is currently awaiting a signature from Gov. Gavin Newsom.