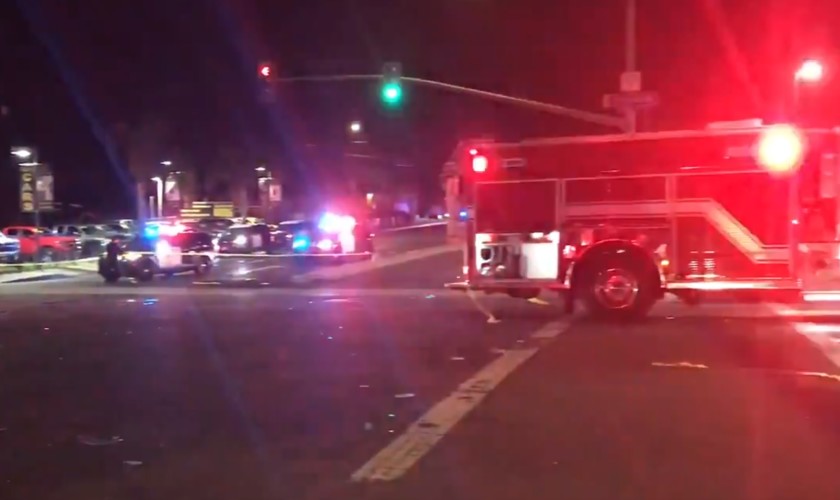 First responders attended to a five-vehicle crash that killed two and injured four others on Wednesday Sept. 9 at the corner of 70th Street and El Cajon Boulevard in San Diego.

During the Associated Students meeting on Monday, President Rose Merida called for a moment of silence to recognize and honor Casey Hargis, a 22-year-old CSUN student who was killed alongside her friend Kiana Taylor, 22, in a car crash Wednesday night in San Diego.

According to reports, Hargis and Taylor entered the intersection to make a left turn onto 70th Street from El Cajon Boulevard in Taylor’s Ford Fusion, when a vehicle slammed into their car from behind. The car subsequently collided with several other vehicles, resulting in the Ford Fusion catching fire.

The young women were rushed to UC San Diego Medical Center in Hillcrest for treatment. Hargis was announced dead six hours later. Taylor died on Friday due to injuries sustained from the crash.

Hargis was a member of CSUN’s Alpha Xi Delta Sorority. She led many fundraising efforts for the chapter’s philanthropy cause of Autism Speaks. A GoFundMe page is set up to raise money for both families to cover funeral costs.

After the committee took a brief moment of silence, Merida commenced the floor for an open forum. CSUN student Matthew Contreras, 22, and the Regional Director for the Yes on Prop 16 campaign urged AS members to spread the word regarding prop 16 and encourage others to vote yes.

“I really need all of you to help me practice what we preach here at CSUN,” Contreras said. “We so often say that CSUN has a diverse population of students, when in fact, I think we should be challenging that narrative.”

The proposition set to appear on the Nov. 3 general election ballot calls to restore affirmative action involving race-based or sex-based preferences in California.

“We have seen a steady decrease in the Latinx and Black students in public institutions. I need your help to change that today. Prop 16 would allow voters to reinstate affirmative action programs,” Contreras said. “I’m asking you to pass a resolution to do everything you can to support this ballot measure here at CSUN.”

Senator Michael Meeks was recognized for his work on the AS sponsored webinar called “Criminal Justice: Fixing a Broken System,” which was held on Sept. 10-11. The event sought to open communication between the student body and faculty to help AS determine how the organization should respond to the movement against police brutality and imagine what a new system could look like.

“We feel AS has a duty to speak out on political issues as it reflects how students feel. We felt a responsibility to do something in this time to recognize the movement going on, and attempted to conceive of something we could do for students that could keep the movement pushing forward,” Meeks said. “We wanted to hear from our professors with expertise on the subject and give them an opportunity to hear and connect with students to figure out what folks on the ground want. But broadly, it was a moment for the campus to come together, learn, and have a conversation.”

Meeks said he may organize another event before the end of the school year, but in the meantime he intends on making followup resolutions to the webinar at upcoming AS meetings.

Senator Meeks motioned to nominate and approve the Internal Affairs Committee chair after Nolan Dafesh, the previous chair, resigned on Sept. 4 due to a scheduling conflict.

AS Vice President Deion Turner appointed Senator Tiffany Abodoh for the second time, who respectively accepted, and was unanimously elected as committee chair.

Senator Isabella Rizzo motioned to nominate and approve a senate representative to the Diversity and Inclusion Committee. Turner nominated Senator Jordan Franco for the position, which was voted upon and passed unanimously.