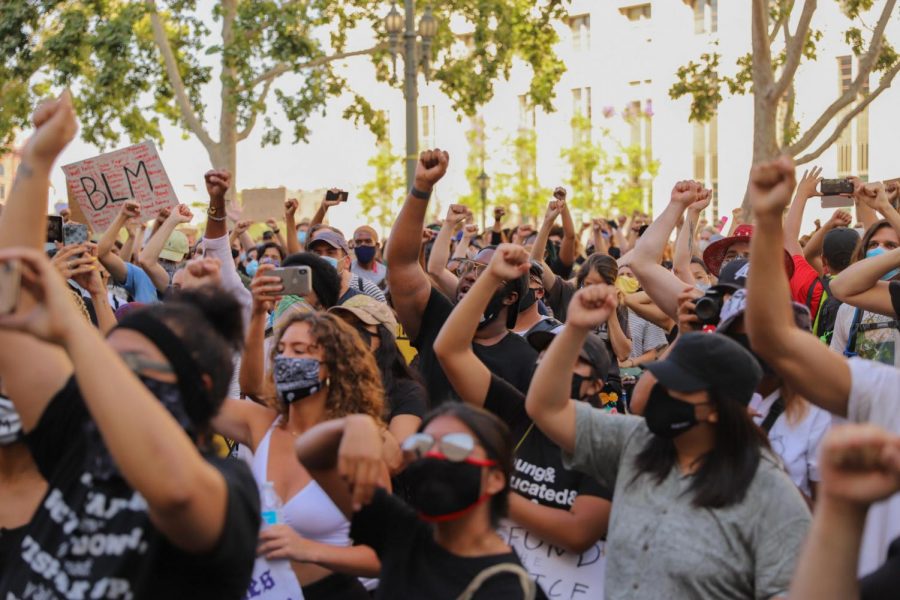 Protestors put their fists up in support of the Black Lives Matter movement during a protest at the Hall of Justice in Los Angeles, Calif., on Friday, June 17, 2020.

On Aug. 26, the Milwaukee Bucks were scheduled to play against the Orlando Magic in Game Five of the first round of the Eastern Conference playoffs. Minutes before the game was expected to start, the Bucks had not left the locker room and were not planning on doing so.

It had just been just three days after police officers shot Jacob Blake in the back seven times in Kenosha, Wisconsin. The shooting of Blake sparked outrage around the country that affected the Bucks — who usually play 40 miles away from Kenosha — deeply.

The Bucks’ wildcat strike created an uprising across sports with WNBA, MLB and NFL teams, who all joined in strike of their games and practices.

The strike also empowered college professors and students across the United States and Canada to participate in a two-day strike in support of the players.

Scholar Strike was coordinated on Twitter by an associate professor at the University of Pennsylvania, Anthea Butler. It gave an opportunity for professors and students to support professional athletes and continue a learning environment while on strike.

From Sept. 8-9, professors from around the country stepped away from teaching their regular courses and instead participated in teach-ins through Zoom focusing on issues related to police brutality, racism and social injustice.

“While there have been lots of actions across the country at colleges and universities about racial justice, Black Lives Matter and police reform and abolition, this is the first time we’ve all come together for two days to focus on this together as professors, students, staff and administrators,” Butler said in an email to the Washington Square News.

California has taken the initiative by passing AB 1460 — a legislation requiring all California State University undergraduate students to pass an ethnic studies course as part of the graduation requirement by the 2023-2024 school year.

“It’s a step in the right direction. CSUN used to be predominantly white in regards to the student population but over the years, we’ve seen an increase of multiculturalism in students and staff,” said Cedric Hackett, an associate professor at CSUN’s Africana studies department.

Weeks before Blake’s shooting, collegiate athletes also took a stand. A group of Pac-12 football players wrote an open letter published in the Players’ Tribune, demanding for health protections, economic gains, preservation of all sports and the ending of racial injustice.

“Guys realize the moment and are standing together in unity throughout this whole thing,” said Valentino Daltoso, a California Golden Bears offensive lineman, in an interview with Sports Illustrated. “This is bigger than our individual selves. This is for all future college athletes.”

Valentino was one of 13 players to publicly sign the letter in the Players’ Tribune.

“Politics have always been a part of athletics and it’s disappointing to see athletes continuously getting black balled for it,” Hackett said. “Student athlete voices need to be heard, validated and considered in ways that contribute to policy changes that address the economic and social disparities among them.”

Led by the Milwaukee Bucks, professors and collegiate athletes sacrificed their careers by protesting the continuous events of police brutality that we have seen in our country.

The Scholar Strike and athletic boycotts are examples of what people are willing to do for change and even though they’re steps in the right direction, we still have a long way to go in the battle against racial injustice.