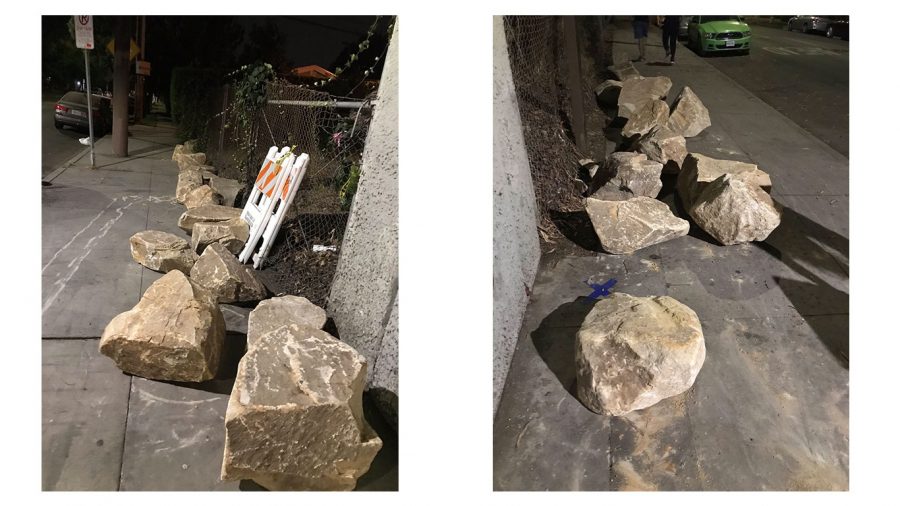 Two induvial images show the rocks that were used on the sidewalk to prevent homeless encampments from popping up in the Cattaraugus Tunnel.

Earlier last week, local community members in the neighborhood of South Robertson placed dozens of boulders at the 10 Freeway underpass, also referred to as Cattaraugus Tunnel, on Cattaraugus Avenue in West Los Angeles in an effort to deter homeless encampments.

The rocks were placed against the tunnel wall, leaving three feet for pedestrian clearance. The official term used for the boulder placements was “homeless prevention environment design.”

Peter Iliff, a resident and screenwriter, organized the GoFundMe campaign — where they raised over $3,000 — because of his and his neighbors’ concerns about safety issues brought on by allowing the unhoused to reside in the tunnel.

Iliff and neighbors reached their breaking point “when an unhoused individual camped in the tunnel chased a resident walking through holding his 4-year-old daughter’s hand while pushing a baby stroller,” Iliff said.

“The long list of violent incidents in Cattaraugus Tunnel has left our community desperate to implement a strategy to keep the passage safe,” Iliff said in an email statement to the Daily Sundial. “We tried what we felt was a peaceful solution.”

Many unhoused individuals live under or near freeways, as the space provides shelter, shade and protection against the heat and rain. LAHSA reported 1,205 homeless people in their 2020 count in Council District 5, where the rocks were placed.

To deter camping near freeways, hostile architecture has flourished near parks and public areas. Hostile architecture is designed to make a space unwelcoming for people who may use the space to rest for an extended period of time. The effects of these designs, such as railings on benches, spike bars and boulders, often go unnoticed or unrealized by people who aren’t unhoused.

Jonathan Pacheco Bell, an urban planner for the Los Angeles Neighborhood Land Trust and a frequent guest lecturer in Urban Planning at CSUN, said hostile architecture is part of a larger problem rather than an effective solution.

“Spikes on seats don’t solve anything,” Bell said. “They just deter people. We’re not getting at the root problem of why people are unhoused.”

In addition to stones and rocks, spikes made of concrete or metal are placed in or near doorways, under bridges and other sheltered areas, making it nearly impossible to sit or occupy the space.

After seeing tweets of the boulders from homeless outreach and advocacy organizations Street Watch L.A. and Ktown for All, resident Dan Donohue organized a group of people to help remove the stones.

Iliff and some other area residents joined the effort following legal threats from the City, according to ABC7.

The Los Angeles Office of Community Beautification, in conjunction with the Bureau of Engineering, oversees sidewalk repairs. Any improvement construction requires a public works permit to be obtained for construction on any property, street or other right of way owned or under the control of the City.

The boulder project organized by the neighbors was not permitted, funded or voted by the board committee members, according to the South Robertson Neighborhood Council.

The South Robertson Neighborhood Council released a statement on the placement of the boulders.

“To be clear, this project did not come before the general board of the Neighborhood Council, and the general board did not vote to provide any funding for this project. We condemn the actions of those involved,” the statement said. “We will pursue appropriate disciplinary action, including censure and/or removal, of any board or committee members who participated in this illegal project while claiming or giving the impression that they did so with authorization from the neighborhood council.”