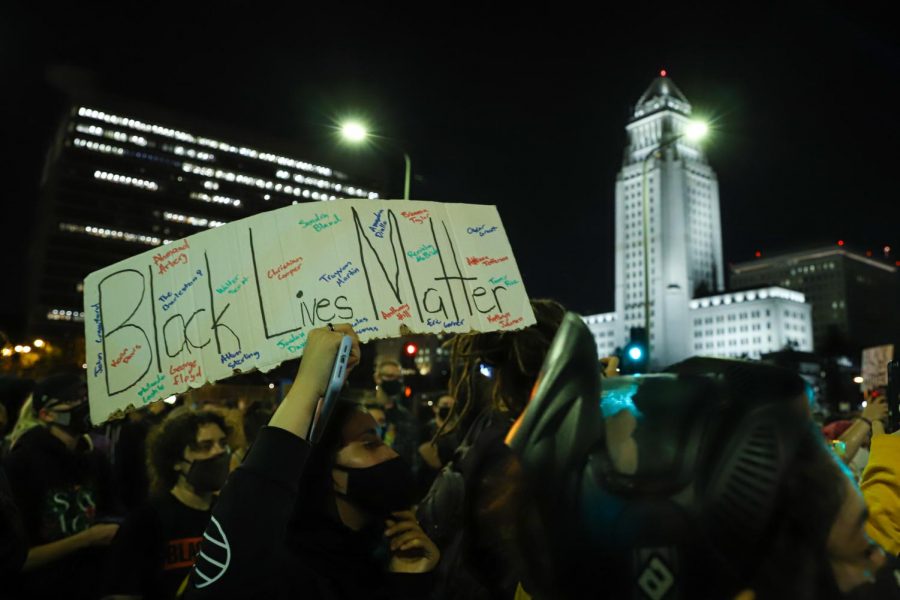 Protesters march the streets of downtown Los Angeles to demand justice for the death of Breonna Taylor after the results of a grand jury indictment of former Louisville police officer Brett Hankinson, in Los Angeles, Calif., on Wednesday, Sept. 23, 2020.

DOWNTOWN LOS ANGELES – Hundreds of people marched through downtown Los Angeles on Wednesday night to protest the outcome of a grand jury investigation into the death of Breonna Taylor.

Louisville police officers fatally shot Taylor in her Kentucky home in March. On Wednesday, a grand jury chose to charge one of the three officers involved in Taylor’s death with wanton endangerment for shots fired into the home of Taylor’s neighbor.

None of the officers were charged with Taylor’s death.

The protest was organized by In This Together L.A. Demonstrators gathered at Father Serra Park before joining more protesters at Union Station.

Black Lives Matter Los Angeles and other activists had been protesting the decision throughout downtown L.A., later merging together to form a larger movement Wednesday night.

After speakers motivated the crowd, protesters marched through downtown and chanted Taylor’s name.

Around 100 people are gathered in front of Union Station for #BreonnaTaylor, a black woman who was fatally shot in her home by police officers in March. @DailySundial pic.twitter.com/e9WufaaJSg

The protest marched through Little Tokyo and past the Los Angeles Police Department headquarters.

Protesters chanted “out of your homes and into the streets” as they marched down Bixel Street and through a residential area.

There was not a strong police presence at first, but more officers faced the crowd throughout the night and blocked off Figueroa Street. Dozens of Los Angeles Police Department cars were gathered around Grand Avenue and Sixth Street with sirens blaring.

Instances of vandalism took place during the protest, including graffiti, according to ABC 7. A couple of demonstrators also broke a restaurant window.