The coronavirus pandemic is affecting small businesses in a plethora of ways. Businesses are being forced to adapt quickly amid changing guidelines and adhere to extensive safety protocols. The “Business as (un)usual” photo series highlights local small businesses near CSUN and dives into how they are navigating through the challenges they have to face in these times. 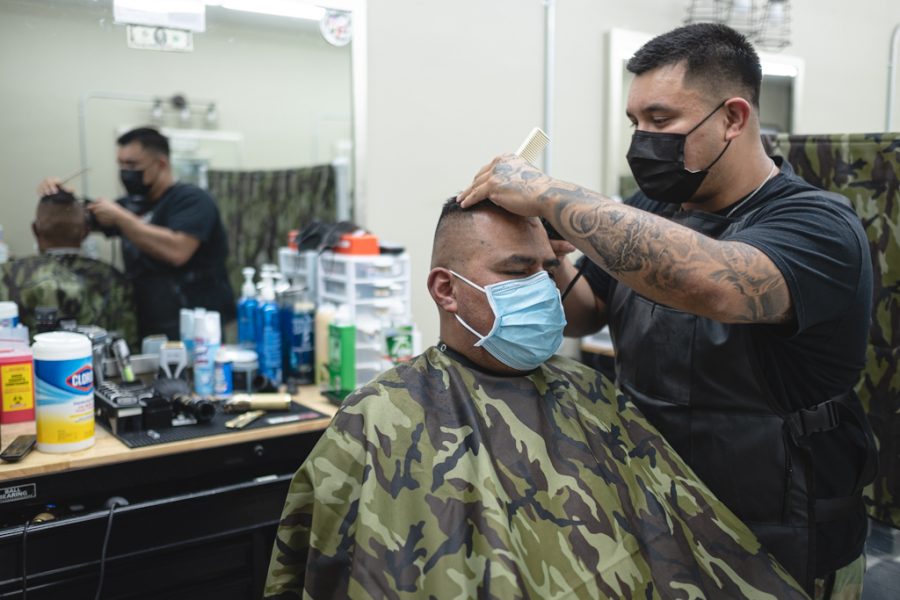 Modern Barber Room, located on Roscoe Boulevard in Northridge, was one of the many small businesses whose profits took a huge hit when the pandemic struck. David Lopez, the owner of Modern Barber Room, and his employees felt lost while waiting for the state to give them a green light to return to work after Gov. Gavin Newsom issued the stay-at-home order in March.

Lopez said he and his employees were put into a tough spot because barbering was their primary source of income.

“It was a shock, I mean we are all registered barbers, we know the protocol when it comes to disinfecting. Knowing that the state didn’t trust us was hard, it started as 14 days, then that turned to two, then four months,” Lopez said. “Not communicating with smaller-run businesses was … It was like we were left in the dark.”

As Lopez and other barbers are considered independent contractors, they do not receive the same unemployment benefits regular employees receive.

The pandemic brought a huge financial loss to the Modern Barber Room, which led to the question of whether Modern Barber Room’s lease should be continued. Most of Lopez’s staff felt like they might have to stop barbering all together.

“We were kinda prepping for the worst. I am the main income so it was a little worrisome. It was very concerning, I have a 9-month-old daughter. A part of me wanted to rush to work and another part was worried for the safety of my daughter,” Lopez said.

Lopez said he initially didn’t believe in the virus but realized it was real after a tragic event happened in his close circle.

“At first we didn’t understand [the virus.] We don’t know much about it. There was a lot of misinformation circling around,” Lopez said. “That changed when one of our close barber brothers lost his sister to it, you know? That really woke us up.”

When Lopez was given the green light to continue taking haircut appointments, he had a plan to ensure his and his family’s safety.

“Back when we [re]opened the first time, we felt confident. The plan was we split the family when I would go to work. On those days my daughter wasn’t with me, then I would go pay for those expensive same-day tests. If I was negative, I would go see my daughter. But they shut us down three weeks later. It was hard and it was a cause for concern since I exposed myself [potentially to the virus],” Lopez said.

When they opened a second time after the restrictions lifted from the first wave of closures, Lopez made it a priority with his staff to create a safe environment that required temperature checks, disinfecting everything including chairs, using disposable capes and requiring scheduled appointments in order to limit the number of people in the shop.

With the Modern Barber Room being open and available for appointments, Lopez and his employees are able to keep themselves afloat for the time being.