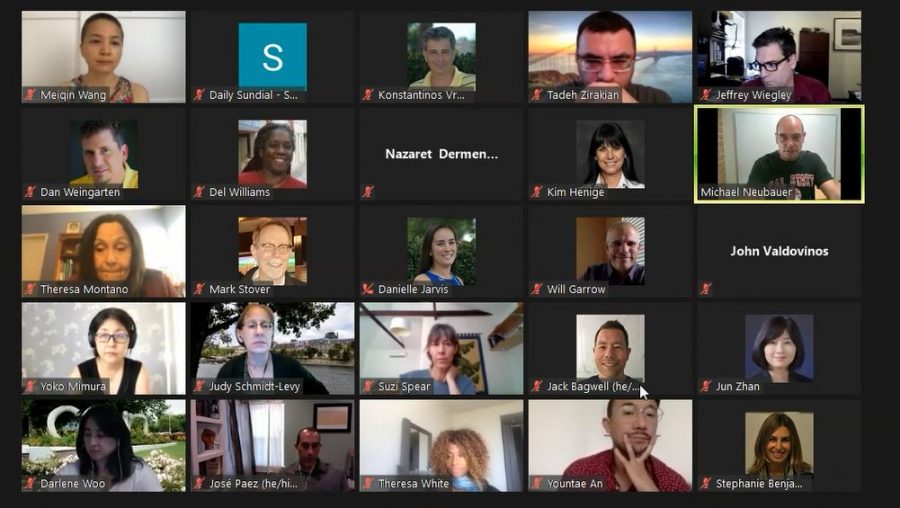 The first Faculty Senate meeting of the fall semester was held on Sept. 24 via Zoom.

The CSUN Faculty Senate passed a resolution on Thursday that opposes the Chancellor’s Office proposed implementation of Assembly Bill 1460, stating that there has not been enough time for appropriate consultation within the California State University Council of Ethnic Studies on all aspects of the bill.

On Aug. 17, Gov. Gavin Newsom signed AB 1460 into law, creating a new three-unit ethnic studies requirement for all CSU campuses. AB 1460 will go into effect for students graduating in the 2024-25 school year.

The opposition from the Faculty Senate comes after the Chancellor’s Office issued a memo to campus presidents on Sept. 10 that explains the processes and timelines for implementation of AB 1460.

The memo requires campuses to implement a general education requirement under “Area F” — the “Comparative Cultural Studies/Gender, Race, Class, and Ethnicity Studies, and Foreign Languages” section — and mandates the ethnic studies requirement be a lower-division course.

The proposal from the Chancellor’s Office also calls for a three-unit reduction from “Area D,” the “Social Sciences and U.S. History and Government” section.

The memo requires campuses to consult with the Ethnic Studies Council and submit a list of core competencies to the Academic Senate of the California State University by Oct. 1.

Theresa Montaño, a Chicano/a studies professor and a Senate Executive Committee member, said that the Chancellor’s Office incorrectly claimed that the CSU Ethnic Studies Council has approved the student learning objectives, also known as core competencies at each of the 23 CSUs.

“From the standpoint of the Ethnic Studies Council, the SLOs were not approved,” Montaño said.

The resolution posed by the Faculty Senate calls for the CSUN Academic Senate to ask the CSU Academic Senate and the Chancellor’s Office to rescind their acceptance of the ethnic studies’ core competencies until the CSU Council of Ethnic Studies has met with program experts to discuss and officially approve the proposed student learning outcomes.

The resolution states that the Sept. 10 memo from the Chancellor’s Office creates an “impossible timeline to ensure appropriate collaboration as required by AB 1460, consultation, deliberation and conversation among ethnic studies faculty and other campus faculty on design, construction, and student-centered implementation of ethnic studies.”

In a statement, the California Faculty Association said the attempts by the Chancellor’s Office to set constraints and timelines on the implementation of AB 1460 is “not aligned with what is in the law and are blatant attempts to minimize faculty control over curriculum.”

The statement from the California Faculty Association calls for the Academic Senate of the California State University, on-campus senates and ethnic studies departments to collectively decline to agree to the memo’s directives.

The CSUN ethnic studies resolution also calls for flexibility and time on how the Ethnic Studies Council will implement AB 1460.

“We want to make sure our students in ethnic studies have a well-rounded curriculum and have a choice in this area,” Montaño said. “We want the rescission of the GE plan that was passed so hurriedly and so undemocratically from the Chancellor’s Office, and we want to be able to develop our own campus implementation teams, led by ethnic studies faculty in collaboration with our colleagues, and you on the Academic Senate.”

Faculty President Michael Neubauer opened the floor for discussion. A majority of the Senate favored the resolution; however, there were disagreements on whether the ethnic studies requirement should be under a general education requirement.

“What we do need to do is to have a conversation across the campus. Should it or should it not be a GE?” said Senator-at-Large Theresa White. “We are not stating that in this document, though, that it cannot or should not be. What we are stating is the Chancellor’s Office cannot tell us that it has to or it doesn’t have to be — that is not part of the law. The point is that we’ve not had the discussion yet, to make that decision.”

Montaño echoed White’s comments: “We can’t make a decision today, and this is one of the reasons why we’re doing this resolution, precisely for the questions that are coming up today, because we have to engage in a thoughtful conversation.”

Senator-at-large Stevie Ruiz seconded the motion to issue the resolution.

“This is about all of us because the chancellor is trying to violate our autonomy and democratic ability to define curriculum in the manner that we need,” Ruiz said.

The resolution passed by a majority vote. The Faculty Senate will distribute the resolution to the Chancellor’s Office, ASCSU Chair and CSU Ethnic Studies Council.

It is unclear what action the CSU will take next over the next few weeks in response to this resolution.

The next Faculty Senate meeting will be held on Oct. 22.