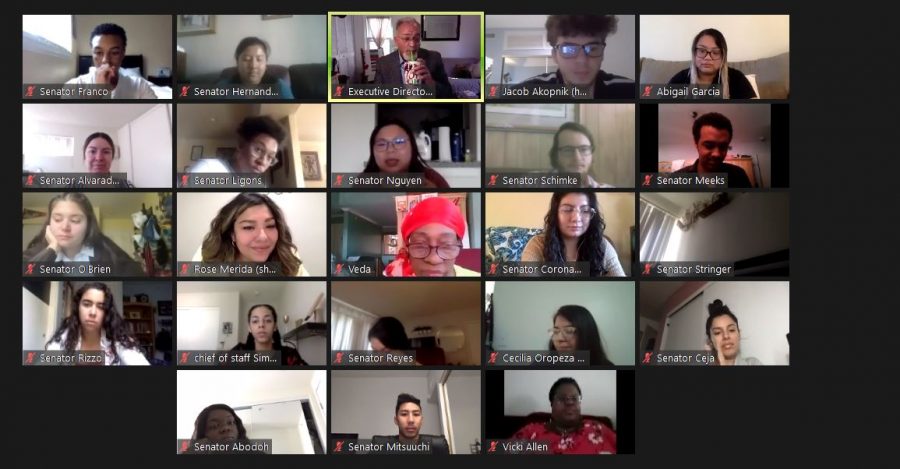 Associated Students President Rose Merida updated the senate on her recent meeting with the Oviatt Library Advisory Group during the senate meeting on Monday.

She said that there might be a potential collaboration with the entire AS senate in renaming the Delmar T. Oviatt Library.

The call to rename the library comes after accusations arose from students claiming that Delmar T. Oviatt was racist and oppressive. Merida said she will communicate with the student body as updates on the renaming of the library become available.

Senator Michael Meeks was the first to speak up against appointing Enaw to the position.

“I am going to vote no on this. I feel as the senate received no consultation in and around this and it arrives on our agenda, almost out of nowhere,” Meeks said. “With that, AS has to be very careful and pick our spots on when we decide to spend [money]. I find it hard to justify the increase in spending, especially because this position is not a traditional one that we’ve had in AS and I’ve seen it function fine without it.”

Senator Liseth Ceja seconded the disapproval, calling for Turner to explain the purpose of the executive assistant position. She also encouraged other senators to voice their opinion on the action item.

Turner addressed the senate, explaining the demanding priorities that are on his plate. He said the executive assistant position is meant to organize the multiple communication channels of student inquiries that are filtered to the vice president.

“I do understand that traditionally the positions are not there, but traditionally, we are in-person. We’re able to move around and have different conversations with different people and balance a lot of different things which unfortunately has been a real struggle for me this semester,” Turner said.

Senator Zachary Schimke criticized the need for the position, stating that each cabinet member has accepted their position with AS and is responsible for managing their priorities accordingly.

Schimke also criticized that the position was not approved by the senate in the first place.

“The idea that a new paid position would be opened up, without our approval is maybe what makes some senators a little bit unhappy,” Schimke said. “I think we should have the final say on whether or not a financial expenditure is going to be made.”

Merida clarified that two executive positions were created by the AS Personnel Board to assist the president and vice president. The board members include Merida, Turner, AS Executive Director Patrick Bailey and Vice President for Student Affairs William Watkins.

Merida said she volunteered not to have an executive assistant.

“For me personally, I do not want an assistant. I don’t know if that will change in the future — who knows, it’s barely October,” Merida said. “But I know that Vice President Turner did want [an assistant], but ultimately, it is up to you as the senate to approve it.”

Senator Adriana Coronado addressed the senate to thank Turner for his work and contribution to AS. However, she disagreed with approving the position as it sends mixed signals to the student body.

“Some students may get the wrong message that we’re willing to allocate money for this when a lot of our student employees have been furloughed, and many students that worked on campus have been let go,” Coronado said.

The discussion lasted roughly 25 minutes before Merida took the motion to a vote. The motion failed with a vote of 2-13.

The event will feature Alicia Garza, the co-founder of Black Lives Matter, and Dellara Gorjian, a UCLA graduate and DACA success-story and advocate, as the keynote speakers.

The free conference is organized by the California Student Engagement Collaborative, in which Allen is a member of the planning committee. The conference gathers students across all UC, CSU and California Community College campuses for an opportunity to examine critical topics that are on campuses today.

The two-day virtual conference will be held on Oct. 16 and 17 and includes workshops and roundtable discussions. Sessions include topics around leadership, social justice, equity, inclusion, and the 2020 elections and voter rights. Registration for the event will open on Oct. 1.