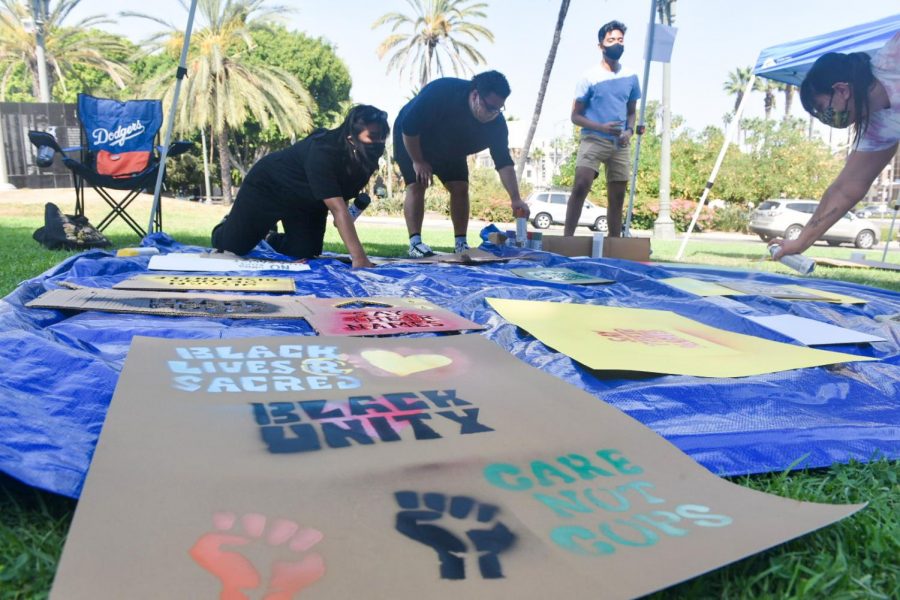 The Los Angeles chapter of The International Indigenous Youth Council advocates for environmental protection and social justice for the indigenous populations, alongside multiple other chapters throughout the country.

The organization was started and led by womxn — a term used by intersectional feminists as an alternative spelling to “woman” to be inclusive of non-binary or trans individuals — and Two Spirit people — an umbrella term used by some Indigenous communities to describe individuals who are gender-variant — during the Standing Rock Indigenous Uprising while protecting the Cannonball and Missouri Rivers against the construction of the Dakota Access Pipeline in 2016.

The L.A. chapter was founded in 2019, and has since hosted demonstrations and online healing spaces, talking circles, personal statement workshops. The organization seeks to inspire youth through education, spiritual practices and civic engagement.

The chapter hosted a Four Directions Climate Strike in East L.A. in February which featured community discussion and live performances.

The IIYC has been active in rallies such as the weekly “Jackie Lacey Must Go” protests in downtown L.A. and Black Lives Matter marches.

On Sunday, the chapter organized a community gathering at Father Serra Park called Artivism, where attendees painted banners, posters with the words “Say Their Names” and collected screen prints that read “George Floyd” and “Black Trans Lives Matter.” Participants spray painted cardboard tombstones and wrote the names of family members and friends who have been killed by police. IIYC provided all supplies to attendees.

IIYC member Alexis Saenz said they wanted to organize a day to create art and seek financial support for Black Unity L.A. — a protest group that lived in an encampment for roughly four months across the street from L.A. City Hall after the killing of George Floyd. The camp was later raided and removed by the L.A. Sheriff Department at roughly 4 a.m. on Sept. 13, less than 24 hours after Deonte Murray allegedly shot two L.A.S.D. deputies.

“We wanted to make a banner for them since everything got taken,” Saenz said. “This event has been amazing, it has been really special to see the community come together to fundraise for Black Unity and use art to heal and we really need that with everything going on.”

Vanessa Gonzalez, 20, manages the chapter’s social media, plans meetings and organizes events. She identifies as Mazahua Native, an Indigenous population from Michoacán and Querétaro in Mexico.

The core planning team consists of five other members, including members who serve as mentors for the organization. Events are advertised through the chapter’s newsletter and Instagram page.

“Meeting has been easier in different ways because people can do things from their own home,” Gonzalez said.

Gonzalez is part of a committee which includes other IIYC members from Texas, Chicago, Turtle Island and Arizona.

“Our work isn’t to benefit us,” Gonzalez said. “Our primary goal is to give it back to [Black, Indigenous and people of color] communities.”

The committee is planning a livestream fundraiser via Zoom for Indigenous People’s Day on Oct. 11. The event will be a fundraiser for Indigenous students in the Southwest without access to online schooling during quarantine, as well as the Kumeyaay Land Defense against the construction of the border wall — which they say impacts ancestral homelands and causes harm to Indigenous people, animals, migration routes and Indigenous nations..