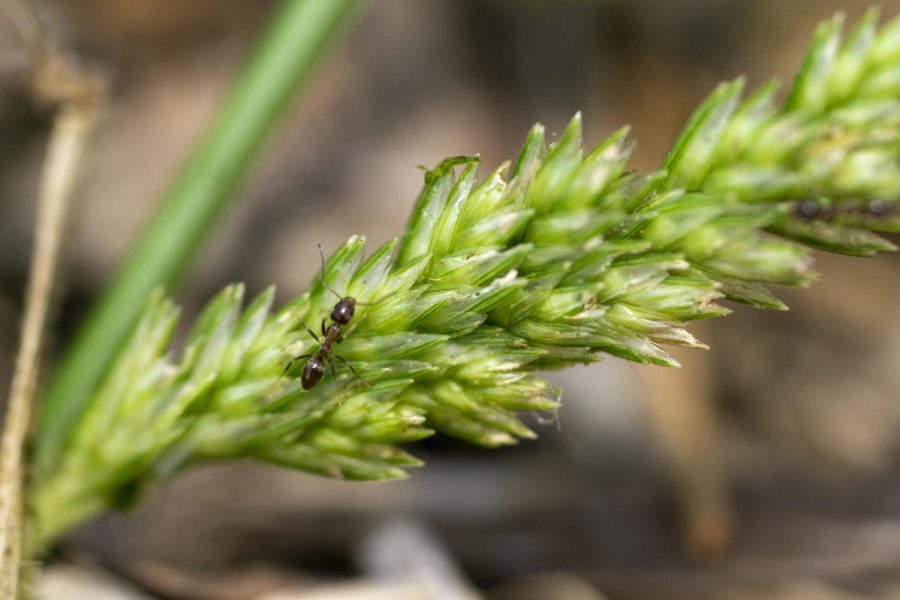 An Argentine ant on a goosegrass — a summer annual grassy weed.

From a native species of squirrel that once burrowed in the hollows of our campus’s trees being driven out by a territorial new species that dominate campus today to a warring army of foreign ants that threatens the indigenous monarch butterfly population, CSUN’s campus is filled with lessons of nature taken for granted.

Richard Rachman, the biodiversity coordinator for the Institute for Sustainability at CSUN, keeps a keen eye on these lessons.

Rachman, an expert on campus wildlife, has helped paint a clearer picture of what lives on campus through his extensive photography and documentation of the hundreds of species of plants, animals, and insects that inhabit CSUN’s campus.

“There’s certainly not a ton of data of what wildlife on campus was like before the closure,” Rachman said. “I don’t know of anyone that’s collecting data after the closure except me.”

Rachman said that it’s hard to determine how campus’s closure has affected its wildlife without data analysis, but that some answers can be found through observation.

In order to observe nocturnal residents of CSUN, such as the Virginia Opossum and Brown Rats, Rachman uses night vision motion-triggered cameras and a standard high-quality handheld camera during the day.

One example of wildlife at CSUN is the Fox Squirrel, observed by Rachman.

Rachman said CSUN may have once been home to the native California Gray Squirrel, and he believes that the more territorial fox squirrel pushed them out at some point.

Rachman speculates the squirrels on campus today fight for the seeds, berries and other organic materials as their only chance for a meal.

“I’ve heard the squirrels are getting a little more aggressive towards each other,” Rachman said. “I think squirrels are having to more so depend on landscaping plants and less so on human trash.”

Rachman said a lack of trash isn’t just an issue for the squirrels. The California Gull or Seagull, along with other opportunistic Avians such as Pigeons and Crows, is now seldom seen on campus.

Such species won’t have to look far to find what they need. Rachman stated that there’s enough trash in Northridge for flying birds to supplement their hunger.

While it is difficult to tell if campus closure has caused an increase in their population, it is possible to find a wide variety of other birds around campus.

The Western Bluebird, American Robin, Morning Dove, Cooper’s Hawk, Barn Owl, Hooded Oriole and Northern Flicker are just a few of the types of birds that Rachman identified on one walkthrough of campus.

Rachman made a point that it isn’t uncommon to see bats at the southeastern corner of campus, swooping down to feed on the duck pond’s insects.

Some critters at CSUN are benefiting from a lack of human population.

The invasive Argentine Ant, originally from the country of their namesake, has dominated the unattended weeds since the campus’s closure. Invasive weeds have started to grow throughout campus, which spells doom for the monarch butterflies.

Scientists warned that there was an 11 to 57% chance that monarch numbers would drop so much in the next 20 years that the species wouldn’t be able to recover.

One of the reasons for the drop in numbers is the lack of milkweed, according to National Geographic. An excess of carbon dioxide in the plant from absorbing the toxins caused by human-caused climate change has made the plant too toxic for the monarch caterpillar to consume.

Rachman says he has been trying to plant more native plants, such as Native Milkweed, that harbor and attract native biology like the Monarch Butterfly and caterpillar.

Argentine Ants defend and care for aphids that live on invasive plants , such as weeds. The aphids secrete a liquid that is the ants’ primary source of food. Aphids frequently eat milkweed, sucking its nutrient-rich liquids that they process and then feed to the ants.

Rachman says this domino effect is bad news for monarch butterflies. As caterpillars, they eat milkweed and as butterflies, lay eggs on the plants. The butterflies  prevent the ants from farming their aphids on milkweed, which the ants perceive as a major threat to the aphids.

“The Argentine ants are ferocious, they will defend their aphids like no other,” Rachman said. “They’ll kill the monarch butterfly and they’ll kill the eggs … we need to be careful about monitoring these invasive species and protecting our native wildlife.”

Rachman encouraged students and citizens to take a more active role in observing and protecting local plants and wildlife. Community science apps such as iNaturalist and eBird are a promising start.

Contributing recordings of birds and butterflies through these apps can help better understand these groups that Rachman calls “the canary in the coalmine for bigger environmental issues, like global deforestation and man-made climate change.”

“Science is not about any single person — it’s a group effort,” Rachman said. “We can all do our part to observe nature and report our findings to the great naturalist community.”

Editors Note: This story was updated on Oct. 7 at 6:02 p.m. to correct factual errors regarding the species listed. Furthermore, we have removed a source from the article due to a reporting error.