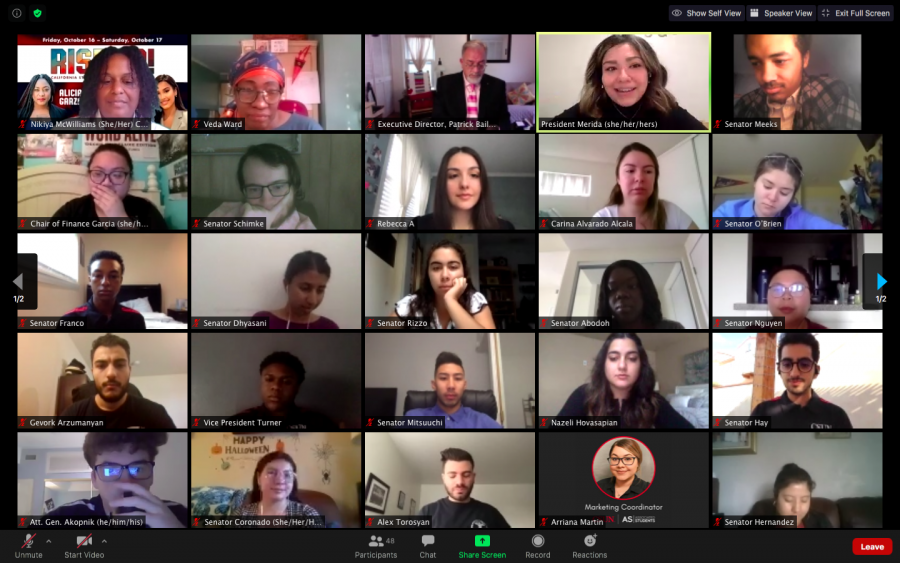 The weekly Associated Students meeting lasted longer than usual this week. The open forum portion of the meeting was focused on students raising awareness to the conflict between Armenia and Azerbaijan.

Three CSUN students used the open forum portion of the meeting to speak on the attacks on Armenia and  the Artsakh region by Azerbaijan. Each student had three minutes to express their concerns and bring awareness to the current issue.

“Armenia only wants peace and we are simply fighting just to exist,” said Nazeli Hovasapian, the president of the pre-physical therapy club. “Your Armenian classmates are living in a nightmare right now. Every morning, we wake up and we frantically check the news. We spend hours working at donation banks to send resources to Armenia and we spend our nights peacefully protesting news channels, like CNN, to get their attention on our cause and receive accurate media coverage.”

Hovasapian said Azerbaijan and Turkish governments have banned internet access and social media from its own citizens to feed them propaganda.

“I’m only here to ask for you to get informed and help us spread this information,” Hovasapian said. “What makes me so proud to be a Matador is that we are a campus that promotes inclusion and always stands against injustice together.”

Hovasapian referred to some news outlets that have been covering the current threats and issues: The Armenian Weekly and Zartonk Media.

“Campus leadership and I have heard from CSUN students and we want them to know that we too are concerned by the rising violence in the Artsakh region. CSUN has many students who have family connections to that region and who have suffered the lasting effects of the genocide of 1915, so this is particularly troubling,” Harrison said in the statement. “Let us all hope for peace in the region.”

Harrison said the university has reached out to the offices of Congressman Brad Sherman and Assemblymember Adrin Nazarian for support and a diplomatic solution.

AS President Rose Merida said the AS senators stand in solidarity with the Armenian community and want to be a part of the conversation.

“What is happening right now in Armenia not only affects the people that we personally know, but affects the entire world itself,” Merida said. “When history is not recognized, it is often repeated. So I definitely want to ask each of you to understand what is going on by taking the initiative to educate yourself and take action.”

AS Executive Director Patrick Bailey acknowledged the conversation students were having.

“I think it’s great that AS is a place where everyone can share. Whether it’s a student in your community talking about what’s happening and what’s affecting them, or whether it’s someone from the campus community sharing about a great conference that’s coming up, or our great resources here,” Bailey said. “I just want to commend all of you for being that place to listen but also the place of action as well.”

In other news, Bailey thanked the production team on the 20th annual Big Show that was held on Saturday night via Zoom. Bailey said over 1,400 students attended the livestream.

The director of health promotion and administration at the Klotz Student Health Center, Marianne Link, and the director of the University Counseling Services, Julie Pearce, presented a new program called You@CSUN. The new online platform is intended to enhance student well-being and connect students to campus resources, information and opportunities.

Pearce said approximately 200 students, faculty and staff members have completed the program so far and have left feedback and recommendations after using the online platform.

“We’d like to ask you that when you get a chance to get into the portal yourselves, please let us know if you would like for us to have anything modified or added, please bring them to our attention,” Pearce said.

Jonathan Loc, a UCLA graduate and volunteer with the Yes on Prop 16 campaign, took some time to inform the senators of Proposition 16. Proposition 16 would repeal Proposition 209 — approved in 1996 — which banned the use of affirmative action in California’s public employment, public contracting and public education.

The ballot measure sets out to fight wage discrimination and systemic barriers by opening up opportunities for women and people of color.

“Our campaign goal is to increase education around affirmative action and stop the spread of misinformation that these groups are disseminating,” Loc said.