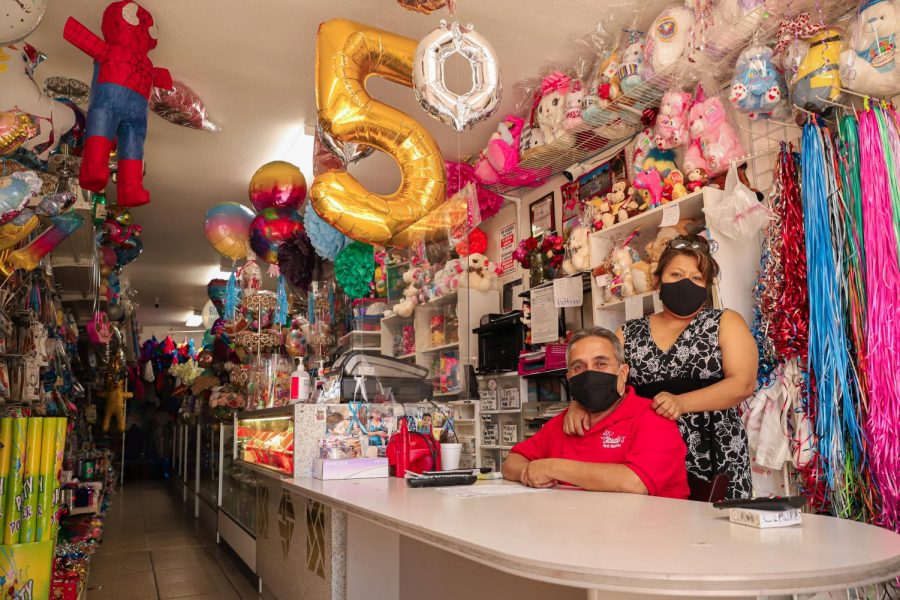 Claudia Paulino and Aurelio Rubio, the owners of Claudia's Party Store, sit at the cashier counter with their masks on in the store at Reseda, Calif., on Monday, Sept. 21, 2020.

Colorful piñatas and streamers hang from the ceiling, while plastic-wrapped gift baskets and soft teddy bears peek out from behind the plexiglass barrier at the counter of Claudia’s Party Supplies, a party supply and equipment rental store in Northridge.

However, the decorations have been attached to the ceiling for months and the teddy bears are not serving as gifts. The store, run by Claudia Paulino and her family for the past 12 years, is struggling to keep its doors open as parties become Zoom meetings and celebrations across the city are put on hold.

Paulino’s store once helped with weddings, quinceañeras and other large gatherings.

When the COVID-19 pandemic began in March, much of Paulino’s business dried up; the store hasn’t partnered with an event since February.

Paulino immigrated from Guerrero, Mexico in 1989. She originally worked as a seamstress who made tablecloths for parties. Working out of her home, Paulino made chair covers and table runners for various events. In 2008, she opened her party supply store.

Now, in the midst of the pandemic, Paulino and her family are struggling to make $2,500 monthly rent payments. Unlike small businesses that can operate online, brick-and-mortar stores like Paulino’s have to pay rent with little revenue.

“We have nothing to pay our rent,” she said. “We already had many parties scheduled for April, May, June and July, and they were all canceled. We had to refund deposits that were already made to us in advance, and we are left with nothing.”

Her store was considered nonessential retail, and was closed for two months during the beginning of the pandemic. The store reopened in May.

“I only know that we’ll make up what we lost and we’ll have enough to sustain the family and to pay off the rent. We’re not asking for anything more.”

Immigrant-owned businesses like Paulino’s make up a large economic impact within the Los Angeles area. In the face of the pandemic, experts also anticipate and observe the destruction of these businesses.

According to New American Economy’s “Map the Impact,” which chronicles the economic impact immigrants play in the United States, there were 415,555 immigrant entrepreneurs in the Los Angeles Metropolitan Area in 2018.

Within the boundaries of California’s 30th Congressional District, which covers the West San Fernando Valley, the same report found that there were 21,341 immigrant business owners in 2017.

Paulino requested loans from banks to the United States Small Business Administration, and her applications were denied. She said she did not know why she was denied the loan.

The Small Business Administration reported that as of Aug. 8, 623,360 businesses in California applied for Payroll Protection Program loans. Paulino’s business has fewer than 10 employees, which disqualifies her for certain payroll loans.

For immigrant business owners, Bamrungpong added that receiving such funds can be harder for them, as businesses that are not facing hardships can complete their applications quickly and with assistance.

The number of applications for PPP loans overwhelmed the Small Business Administration’s processing site in April.

“Many immigrant-owned small businesses found that PPP funds were depleted before they could gain access to the available resources,” said Bamrungpong. “Since the funds were depleted, there have been delays in any further stimulus measures that might extend the program so that more businesses could participate or that priority might be established on the basis of need, rather than speed.”

Bamrungpong said that although many businesses took advantage of loans to stay afloat, those same resources weren’t given to immigrant business owners.

“Immigrant-owned small businesses have all the same challenges facing larger businesses, but may have limited resources and obstacles accessing resources from traditional sources, including agencies and financial institutions,” Bamrungpong said. “Many small businesses operate with less than six-months of cash reserves. When they need access to short-term borrowing, they may be offered less favorable terms or rates than other established traditional businesses.”

Robert W. Fairlie, an economics professor at UC Santa Cruz, wrote in a paper for the Journal of Economics and Management Strategy that minority and immigrant-owned businesses across the nation were hit the hardest in the aftermath of the pandemic.

Using estimates from the Current Population Survey microdata, Fairlie reported that approximately 3.1 million immigrants in the United States were business owners in February of this year. That number had decreased by 36% in April.

According to the same report, there were 11,892,417 native-born business owners in February. In April, that number declined by 18%.

“The 2008 crisis was pretty severe, but the month-to-month change in business activity from February to April was much bigger,” Fairlie said. “The recovery is likely to be slow.”

Bamrungpong said immigrant-owned small businesses will be vital to the economic recovery of the pandemic’s economic hit.

Paulino hopes her party supply store will recover despite the economic uncertainty. Birthdays, although scaled down, will continue to be celebrated. The store is mostly fulfilling orders for balloon arrangements to get by.

“I only know that we’ll make up what we lost and we’ll have enough to sustain the family and to pay off the rent,” Paulino said. “We’re not asking for anything more.”