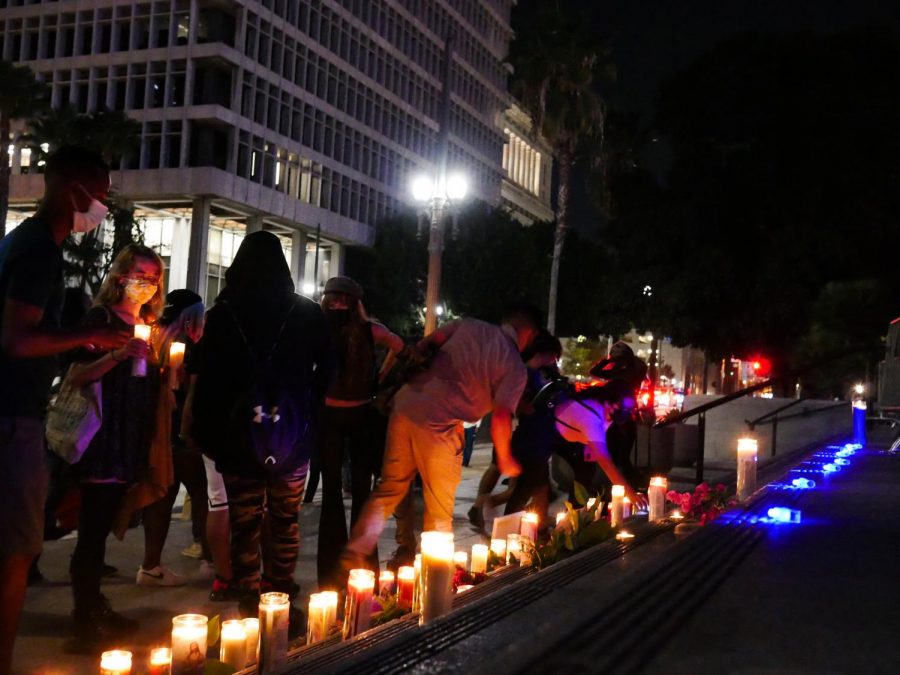 Mourners placing candles on the steps of Los Angeles City Hall in remembrance of George Floyd on his 47th birthday on Wednesday, Oct. 14, 2020.

Dozens of protesters gathered outside Los Angeles City Hall in downtown Los Angeles on Wednesday to celebrate what would have been George Floyd’s 47th birthday.

Floyd was a Black man that was killed in Minneapolis during an arrest outside of a convenience store in May. Former police officer Derek Chauvin pinned Floyd down with his knee on Floyd’s neck for eight minutes and 46 seconds. Floyd’s murder led to calls for justice and protests across the country.

Floyd is remembered as a son, brother, father and was regarded by his family as “a gentle giant.”

Candles flickered on the steps of the building, lighting up the faces of protesters who gave impromptu speeches about Floyd and their own experiences with police violence. Several signs with Floyd’s name were also displayed.

After a few more speeches, the group moved to the main entrance of City Hall. One protester tearfully spoke about allyship and her fear for her son’s life.

“You need to stand between Black bodies and law enforcement. That’s what allyship is,” she said.

The group held moments of silence for Floyd.

Earlier in the night, Armenian protesters had also gathered at City Hall. Several of those protesters stayed to support the protesters gathered for George Floyd.

During the memorial, two attendees got into a physical altercation. The protest continued, but leaders ended it early out of fear that the conflict would escalate.