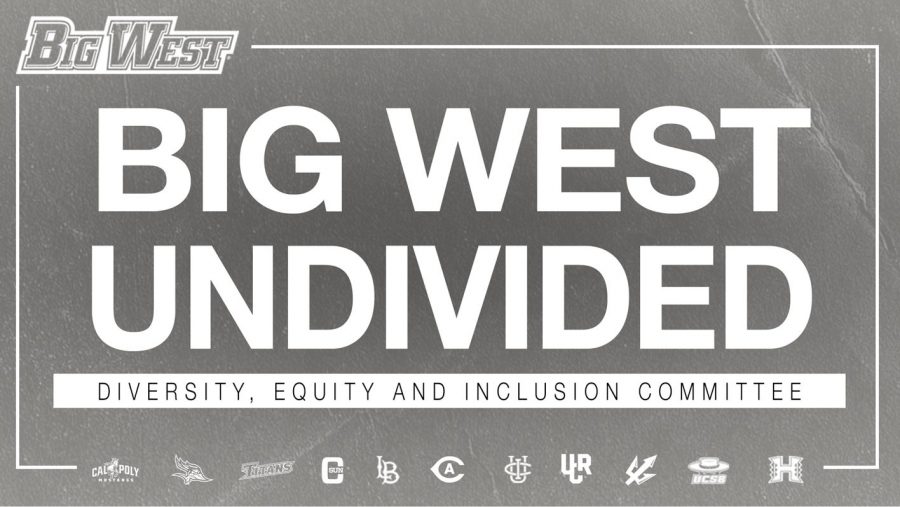 The Big West announced the formation of a new committee on diversity, equity and inclusion named Big West Undivided on Sept. 14. This committee involves one student-athlete and at least one administrator per school. They plan to work towards social justice initiatives that help educate and empower the Big West Conference as a whole.
This committee operates under four pillars: education, empowerment, accountability and change according to the Conference. Each pillar is composed of members to speak and evaluate how these issues relate to the league.
This committee is working in tandem with the Big West’s social series, “More Than A Moment” to combat racism, fight for social justice and support the Black Lives Matter movement and other nonviolent movements alongside its coaches and college athletes according to the Big West Conference.
Created in response to the killing of George Floyd and recent racial injustice events, the series is a roundtable of coaches, college athletes and school administrators speaking on current social justice issues. Hosted by the Big West, the series consists of personal accounts of hardships the speakers have faced due to racial issues and how they have combated these issues.
“The concept behind ‘More Than a Moment’ is that the development of a committee is more than just a reaction to one incident or moment in time but a cultural shift to significantly address issues concerning diversity, discrimination, equity, inclusion and antiracism,” Big West Commisioner Dan Butterly said.
The idea for Big West Undivided began with UC San Diego Athletic Director Earl Edwards asking Butterly if there was a Diversity and Inclusion committee according to Big West Assistant Director of Communications Chris Hargraves. Shortly after, it was created not only as a platform to talk about issues of diversity and equity in the Big West, but to also strive to find and implement solutions to these problems.
“The student-athlete voice is invaluable,” Hargraves said. “They are the ones that lead the initiatives and movements.”
Hargraves also helped form Big West Undivided and hosts the “More Than a Moment” series along with co-host Rahshaun Haylock. He described both mediums of change as ways for students to have conversations with each other and keep the momentum going as it pertains to the Black Lives Matter movement and other societal issues of equality.
The CSUN members of Big West Undivided include Director of Equity and Diversity and Title IX coordinator Barrett Morris, Executive Associate Athletics Director Valerie Richardson and women’s soccer and track and field athlete, Taylor Thames.
“We want to make sure we are connected to get the pulse of the student-athletes and faculty, understanding how people are feeling so that we can support them,” Morris said. “If you see my name on a committee, you can be sure there will be real work done.”
Morris started his career as a civil rights investigator and wrote some of the first cases for racial profiling in Michigan in 2000. He is the chair of the Big West Undivided Research and Assessment subcommittee. Morris has experience working and speaking with the NCAA about how they can both identify these issues and find the best practices to fix them.
In a statement Thames wrote, she spoke about her vision for the committee: “Diversity and inclusion are more than just the ‘hot topic’ of the month. They are the legacy we leave as institutions and a promise we make to our student-athletes. It’s empowering student-athletes to recognize that they are walking vehicles of change, not only at their respective institutions, but in the world itself.”
Most recently, Big West Undivided has been working with the Student-Athlete Advisory Committee to promote voter initiatives, motivating student-athletes and others to vote and providing nonpartisan resources and registration information.
The committee had four meetings as of Oct. 14 and will continue to have monthly meetings tackling issues that go beyond fields, sidelines and locker rooms.