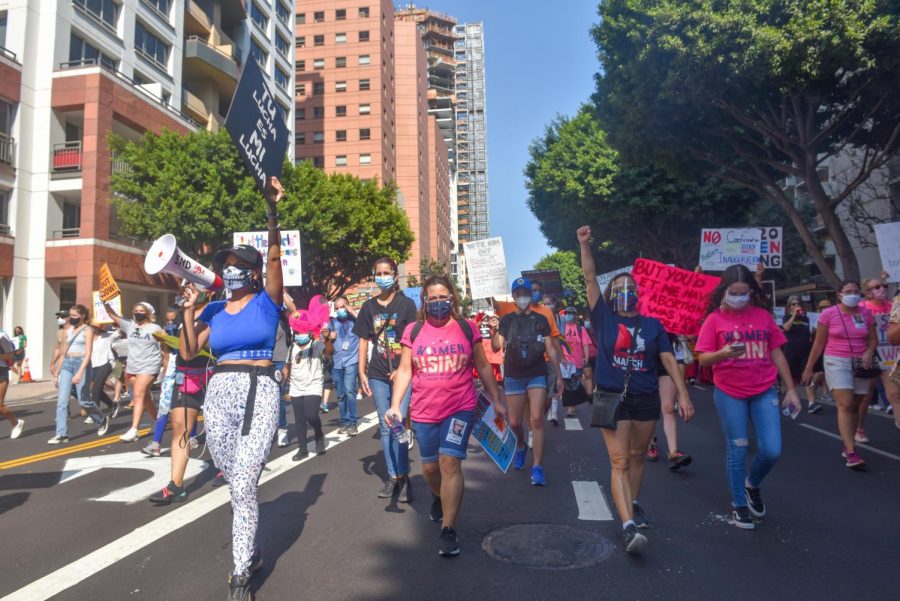 Protesters making their way through downtown Los Angeles for the Women's March on Saturday, Oct. 17, 2020. The march in L.A. was one of over 400 in-person and virtual marches organized nationwide.

The scorching midday sun beat down on hundreds of women’s rights activists gathered at Pershing Square in downtown Los Angeles on Saturday. Sweat beaded on foreheads and attendees accepted water bottles from volunteers but through the heat, there were smiles and passionate chants.

The march was one of hundreds organized across the United States to encourage voting ahead of the 2020 election and to protest the confirmation hearings of Supreme Court Justice nominee Amy Coney Barrett. Many also mourned the passing of the late Supreme Court Justice Ruth Bader Ginsburg, a champion for the women’s rights movement.

The event was organized by Women’s March, the group that organized the original Women’s March in Jan. 2017 to protest the election of Donald Trump. The turnout at Saturday’s event was lower than expected because of the heat and the COVID-19 pandemic.

After several activists spoke at Pershing Square, the group marched down Olive Street to the L.A. City Hall.

Some of those marching were in their 60s. Toddlers, some too small to walk on their own, rode along in wagons pulled by their parents. A line of women dressed in bright red costumes referencing “The Handmaid’s Tale” walked in a line at the front of the crowd.

Kathleen, an attendee who did not want to give her last name, came from her home in Mexico to march. The event was her first march. She felt motivated to protest against President Trump ahead of the election.

“I’m feeling confident,” she said. “I refuse to feel any other way.”

“I’ve been marching since I was in junior high,” said an attendee named Audrey, who did not want to give her last name. “Marching allows you to feel and know that you are not alone … it’s not enough to just hit the pavement. You have to do other things.”

Amber Otwell, one of the organizers of the event, spoke passionately to the marchers and asked for a moment of silence to remember people who have died to COVID-19 and police brutality in 2020.

The crowd hushed. The clicks of camera shutters stopped. Photographers bowed their heads. For a few seconds, the steps of City Hall were silent — as if no one was there at all.

After more activists spoke, the group marched back to Pershing Square.

In between directing cars and monitoring the crowd, Otwell spoke of the group’s mission and her hopes for the future.

“We came to finish what we started,” Otwell said. “Nothing can stop us. Not the police brutality, not COVID, nothing can stop us from coming out and marching for justice. We know that we’re the future of this nation,” she said.

When the demonstrators arrived back at Pershing Square, the march ended early at 2 p.m due to the heat.