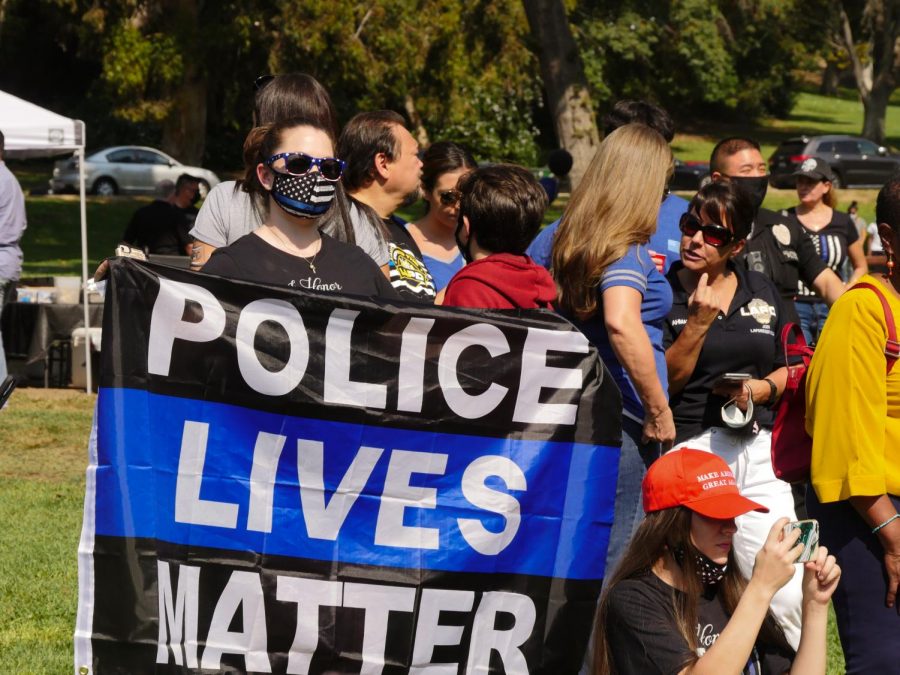 A woman holds up a "Police lives matter" flag at a rally for police officers in Elysian Park on Saturday, Oct. 17, 2020.

Police officers and their families gathered at Elysian Park on Saturday at an event organized by Defend The LAPD, an organization dedicated to supporting law enforcement.

A band played as a few hundred people, including officers and their families, ate food and walked around the park. Classic police cars were parked on the grass. Many attendees were spouses of officers.

Many people at the event wore “Back the Blue” and “Blue lives matter” attire, along with Trump paraphernalia. Many were not wearing masks.

“The media and a lot of people are making them feel like they have nobody in their corner to back them up, but they really do,” said Amanda Castro, an attendee. “We really do back the blue. Blue lives really do matter.”

Several other rallies were planned across Los Angeles on the same day in support of women’s rights and the Black Lives Matter movement.

Attendees at the rally expressed frustration with activists and sadness that police officers are not appreciated for their service.

“I think with the media that’s all over the news right now, it’s kind of a negative stigma towards law enforcement. A lot of people tend to forget that these people are putting their life on the line daily,” Jeannine Galban, an attendee, said. “It’s kind of comforting to see that you’re not alone, especially in times like this when there is so much negativity towards law enforcement.”

In South L.A., a Los Angeles Police Department deputy fatally shot a man who was allegedly armed with a gun and threatening four people on Wednesday. Several protesters arrived at the site of the shooting in the hours after it occurred and were arrested by police.

“I’m disappointed, because in this portion of the country, what was focused on was the officer-involved shooting that results in the death of a man,” Moore said.

After the organizers spoke to the crowd, the L.A. Police Emerald Society Pipes and Drums played.

Counter-protesters arrived at the rally and argued with attendees. No arrests were reported.

Editor’s note: The article has been edited to correct the misidentifying the deputy and the date on which the South L.A. shooting occurred.