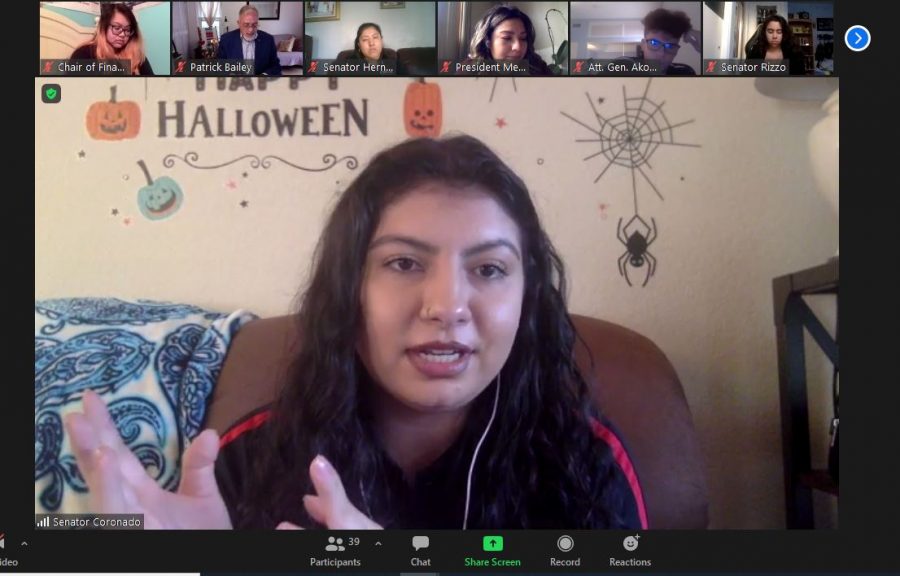 Senator Adriana Coronado addresses the Associated Students Senate regarding the benefits of Proposition 16 on Monday, Oct. 19, 2020.

As election day approaches, Associated Students established a resolution to mark its position on the 2020 general election ballot items. On Monday, the senate voted to change its stance on three of the 12 propositions on the California ballot.

According to the statement, AS is the institutional voice of over 38,000 CSUN students and is responsible to endorse and oppose ballot items within the general election.

The External Affairs Committee began working toward establishing positions on ballot measures for the general election on Sept. 23. Once the resolution was forwarded for senate approval, the entire board suggested amendments that changed the stance from neutral to in-support or opposition of Propositions 16, 18 and 20.

Senator Adriana Coronado motioned to amend the resolution and change the position on Proposition 16 from neutral to a stance of endorsement. Proposition 16 would restore affirmative action, which factors in race, gender and ethnicity when making hiring, spending and admissions decisions.

The statement about the position said, “AS endorses California proposition 16 because it understands that historical inequities around race linger into the present and deserve aggressive confrontation if they are ever to be overcome.”

Coronado addressed the senate with research on the proposition to respond to senate members who are concerned about the ballot measure.

“Diversity is really important to provide more background to different experiences and different ways of life,” Coronado said. “To have the same groups of thinking doesn’t incite great conversation and doesn’t cover all the bases.”

After Coronado’s statement, AS President Rose Merida said that both the CSU Board of Trustees and the Cal State Student Association support the proposition.

Senator Zachary Schimke argued that Proposition 16 will not be able to distinguish between positive preferential treatment and negative discrimination.

Schimke says that similarly, affirmative action programs target and single out specific groups based on skin color or gender and asserts that these groups deserve different treatment than other groups.

“If you look at the history of preferential policies, they are [always] met with failure because there’s no distinction between them,” Schimke said. “Whenever you try to get good outcomes using bad means, you’re disappointed because the bad moral value of discrimination ends up overriding the good intent of the affirmative action or preferential policy.”

After the discussion, the senate voted on the amendment to change the AS stance from neutral to an endorsement. The motion passed with a vote of 14-1 and three abstained votes.

Senator and Chair of the External Affairs committee Michael Meeks motioned to amend the AS stance on Proposition 18 from neutral to the point of endorsement. Proposition 18 would allow 17-year-olds who will be 18 at the next general election to vote in primary elections.

Before voting, Meeks quoted a statement from the resolution with the official language of the AS position on Proposition 18 that stated “young people are vital to our democracy and deserving of a voice in primaries.”

The motion passed with a vote of 14-3 and one abstained vote.

Meeks initiated another motion to amend the resolution to change the AS position on Proposition 20 from neutral to an opposition stance. Proposition 20 would reclassify some misdemeanor crimes as felonies and would take a more assertive approach on parole.

According to the AS resolution statement, “AS opposes prop 20 because we understand carcerality as a failure of our society and for that reason will not seek to increase it.”

Schimke disagreed with the language used in the position statement stating that it is unspecific.

The senate voted on the amended stance, which passed with a majority vote.

Veda Ward, faculty advisor and professor of Recreation and Tourism Management, commended Schimke and Meeks for their healthy conversation over the propositions and reminded the group of how important it is to create a dialogue among each other and the constituents they serve.

“Great dialogue and great examples of how to approach issues and remain friends at the end,” Ward said. “Your voices are very important in that process.”