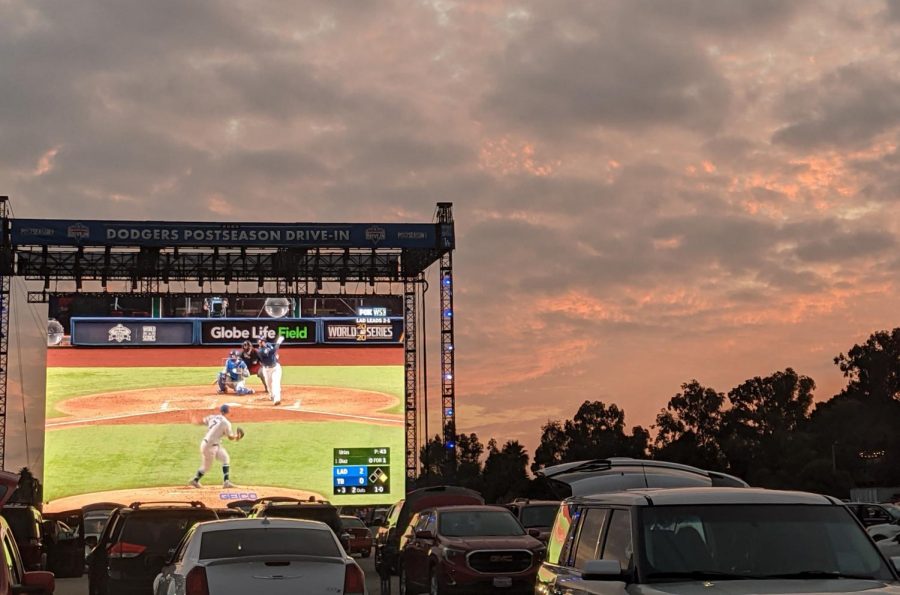 Cars fill the parking lot of Dodger Stadium on Saturday, Oct. 24 for Game 4 of the World Series.

The stadium still had its lights on to illuminate thousands of tiered seats, but Dodgers fans weren’t sitting in them. They were sitting in their cars in the huge parking lot of Dodger Stadium, enjoying the game playing on a 60-foot screen.

When the pandemic first hit, it was hard to imagine being at a baseball game again, wandering through a huge stadium and brushing shoulders with blue-jerseyed fans. Despite this, Dodgers ownership found a way to keep the community connected when it hosted the first drive-in viewing party for Game 1 of the National League Championship Series.

The event has continued into the World Series. Cars lined up well before the gates were open at the stadium, and the line stretched all the way down Sunset Boulevard.

For $75 per car, drivers can bring a car full of people in their vehicle and park in front of a large screen showing the game. Tickets are sold online, but there is currently a waitlist for other drive-in games.

No food or drinks are sold at the stadium, but fans can bring their own food and beverage of choice. Alcohol is not permitted and security will search the car prior to entry into the parking lot.

Parking spots are staggered — like a checkerboard of cars — to ensure that everyone can see the screen. Some cars parked facing forward, while others backed-in to spots to open the trunk and have a car picnic.

A few fans climbed on top of their cars to sit on the roof for an unobstructed view of the screen despite this being a violation of the stadium’s regulations.

Once parked, drivers can tune in via radio to hear a synchronous broadcast while watching the game.

Saturday’s Game 4 was suspenseful for Dodger fans and the parking lot was able to find a sense of community to cheer with.

A sudden eruption of stadium cheers has been replaced by honking of car horns, shouting out of windows and the flashing of hazard lights. The screen, which had blue lights on the side, would pulsate during a run, similar to when jumbotrons in the stadium would hype the fans in a traditional setting.

Police on bicycles and stadium security in golf carts patrolled up and down the aisles to ensure everyone stayed in their cars or were at least socially distanced from other fans. When going to use the portable bathrooms, fans were required to wear proper face coverings.

Fans were at the edge of their seats as the Tampa Bay Rays tried to tie the game in the ninth inning.

In a quick turn of events, Brett Philips ran to home base, tying the game and Randy Arozarena slid home shortly after. In a matter of seconds, the Dodgers missed catches multiple times, leading them to their loss. The Rays won the game 8-7.

Fans watching from the stadium were the quietest they’d been the whole game as the bottom of the ninth inning unfolded before them. As the Rays ran into the field to celebrate their victory, audible goans, shouting and roaring of car engines starting could be heard throughout the lot.

Many immediately pulled out of their parking spots to beat inevitable long lines leaving the stadium.

As the sun set on Dodger Stadium, lights from downtown Los Angeles were visible for the duration of the game. The stadium, empty inside, was a reminder of what it once was like to watch games on-location. The drive-in setting served as a hopeful new mode of watching sports while social distancing.