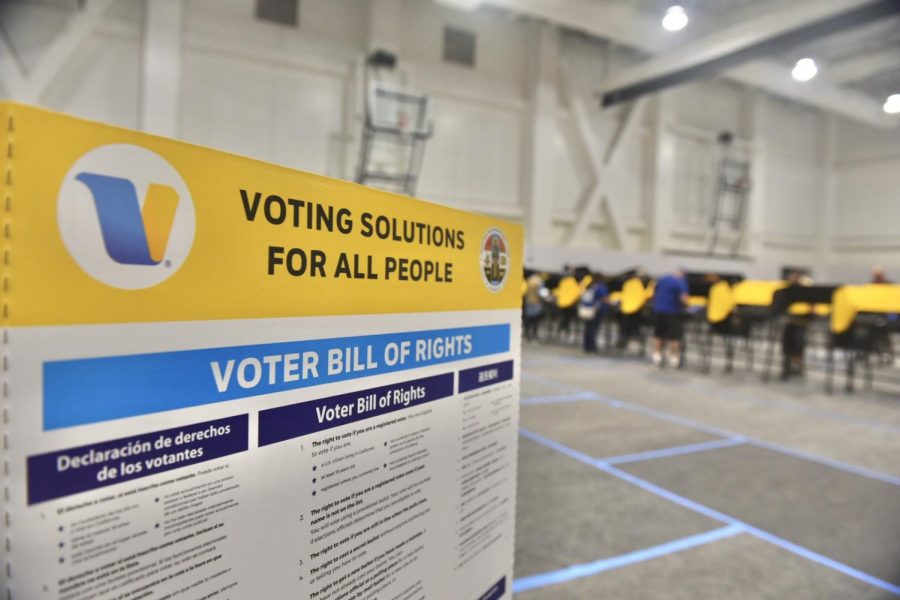 As voters decide on which candidate is best suited to combat current issues, voter suppression and discrimination against people of color continue to be barriers that keep voters from casting their ballots.

In an effort to educate students, CSUN Black House, West Valley People Alliance and BLM Northridge organized a workshop where various speakers, activists and CSUN students spoke on the impact of voter suppression and how homelessness affects voters.

Tandalea Mercer, a professor of African American studies at CSUN, said suppression exists as an effort to discourage what would be a large percentage of qualified eligible voters from exercising their right to vote, and creating a majority lead in voters in an opposing party.

“Voter suppression is a group of tactics used since the reconstruction era when Blacks were given the right to vote to impede voting,” Mercer said. “Voter suppression can also be a strategy used to influence the outcome of an election, by discouraging or preventing specific groups of people from voting.”

Identification requirements are one of the main issues that prevent prospective voters from voting. According to the ACLU, up to 11% of American citizens — more than 21 million Americans — lack a photo ID in 2017. 35 states have identification requirements at the polls and six of those states have strict ID laws, where voters must present a government issued photo ID in order to cast their ballots, according to the National Conference of State Legislatures.

In Los Angeles County, a California driver license or California Identification Card number, the last four digits of a social security number and a date of birth is required to register to vote.

“These very strict ID laws are part of an ongoing strategy to suppress the vote and it actually works,” Mercer said. “Over 21 million U.S. citizens do not have government-issued photo identification, can you imagine? That’s because ID cards aren’t always accessible for everyone, and the ID itself can be costly.”

According to the ACLU, voter ID laws reduce voter turnout by two to three percentage points, which can translate to tens of thousands of votes lost in a single state.

Transgender and indigenous people face challenges due to incorrect name on the voter registration rolls or voter ID laws. Approximately 42% of eligible transgender people in 45 states have no identification documents that reflect their correct name and/or gender.

Kim Olsen, a member of West Valley People’s Alliance, said the organization has tried to get unhoused people registered to vote ahead of the election and provided them with addresses to receive ballots.

“So many unhoused people around this county did not get to vote in local races that affect their day to day lives,” Olsen said.

Olsen said she was helping one unhoused individual who was having issues with his ballot and felt humiliated and demoralized by the process. He asked her to take him home and he refused to return the next day. She said unhoused people just want their vote to count and not feel alienated.

Another form of voter suppression is disinformation on the voting procedure. Mercer said an estimated 60,000 voters will arrive at the polls on Election Day and will find out they are ineligible to vote due to issues with their registration.

“It’s giving voters false information about when and how to vote, leading them to fail to actually cast their ballot,” Mercer said.

Mercer said another large part of voter suppression is due to felony disenfranchisement. According to The Sentencing Project, as of 2020, an estimated 5.17 million people are deprived of the right to vote due to a felony conviction. One out of 44 adults, which equals to 2.27% of the total eligible voting population in the U.S., is disenfranchised due to a current or previous felony conviction.

“As incarceration rises, so does the disenfranchised population,” Mercer said. “Due to racial bias in the criminal justice system, felony disenfranchisement laws disproportionately affect Black people who often face harsher sentences than white people for the same offenses.”

“We are all affected by voter suppression, seniors elderly, students, new voters, poor people, people of color, and most disproportionately Blacks, Hispanics and immigrants,” Mercer said.

Proposition 17, a proposition on California’s ballot this year, combats voter disenfranchisement by restoring the voting rights to people on parole. A “yes” vote would allow people to vote if they are at least 18 years of age upon their release from prison. A “no” vote would continue restricting the right to vote for people who have been released from prison.

To protect one’s right to vote, Mercer recommends being aware of deadlines, understanding which documents are required and resisting voter intimidation.

“The right to vote is the most fundamental constitutional right. Democracy cannot exist without the electoral participation of citizens,” Mercer said. “We vote because it’s we the people, who are supposed to shape the government, not the other way around.”