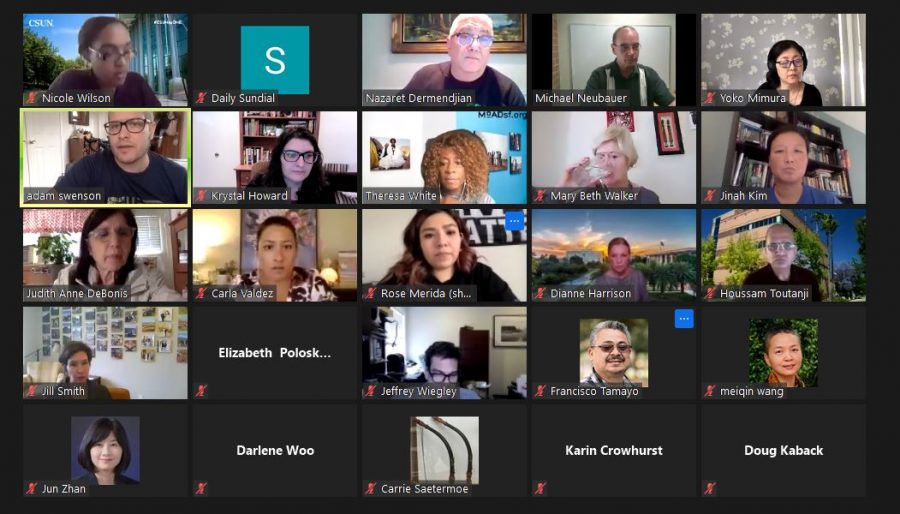 The Faculty Senate unanimously passed a resolution on Thursday in support of the Armenians of CSUN and the Republic of Artsakh that condemns Azerbaijan aggression toward Armenia and the Artsakh region.

The drafted statement of solidarity outlines that on Sept. 27, Azerbaijan’s government started a war on the Republic of Artsakh, which consists of a primarily Armenian population, by using cluster bombs and kamikaze drones on the civilian populations.

The statement states that CSUN is home to over 3,500 Armenian students and employees, a large number of Armenian faculty, staff and administrators — some of whom are descendants of the survivors of the 1915 Armenian genocide.

The statement resolves that the Faculty Senate stands in solidarity with Armenian students, faculty, administrators and staff at CSUN, and calls for the discontinuation of all violence in the Artsakh region.

Nazaret Dermendjian, professor and chair of the Department of Civil Engineering and Construction Management, requested that the statement of solidarity be posted on the banner on the main page of CSUN’s website.

“I think it will be of very good use for our student body, to have them realize that the faculty senate stands in solidarity with our students regarding any injustice,” Dermendjian said.

Dermendjian asked if there was a way to send the statement to the Academic Senate of the California State University. Adam Swenson, a representative of CSUN on the ASCSU and a philosophy professor, volunteered to introduce the resolution to the statewide Senate.

During the university president report, CSUN President Dianne F. Harrison updated the senate on the potential renaming of the Delmar T. Oviatt Library.

The Oviatt Library Advisory Group consists of members of the CSUN community and is chaired by Vice President of Student Affairs William Watkins. The advisory group was tasked with reviewing concerns related to the legacy of Delmar T. Oviatt and the library being named in recognition of him after the Students of Color Coalition demanded the library be renamed.

Watkins submitted a recommendation after the advisory group concluded its findings last week, according to Harrison. The proposal will be sent to the Faculty Senate and AS for review and feedback.

“I look forward to receiving everyone’s feedback and reporting to the campus community on any appropriate actions that follow,” Harrison said.

Harrison said that a public announcement regarding the search for CSUN’s next president will be made this week.

An email sent out by the Office of the President on Friday, with a message from CSU Chancellor Timothy P. White stated that the Board of Trustees will soon interview the finalists. An announcement of the appointment of the next president of CSUN will be made via livestream at 9 a.m. on Oct. 29.

“Thank you to all who attended the forum on campus or shared input about the knowledge, skills, and experience requisite of the next campus president,” White said in the statement. “Your input was invaluable in assisting the board in identifying a candidate that will build on the exemplary work of President Harrison.”

At the September Faculty Senate meeting, Faculty Senate President Michael Neubauer announced the resignation of the vice president of the Faculty Senate, Samira Moughrabi, who was elected to the position in March of this year but shortly left CSUN for another position.

Senator at Large Theresa White and Senate Executive Committee meeting member Jeff Wiegley were nominated for the position. After the September meeting, voting ballots were sent out to senate members. White was elected vice president of the Faculty Senate.

White is a professor and chair of the Department of Africana studies. White said that her focus will be on developing closer relationships with the senators and gaining a better understanding of what the Senate expects, and how both Neubauer and White can support and collaborate with the committee.

“We are thinking about ways in which we can continue to uplevel the democratic process in the faculty senate and to get to know you a little bit better to make sure your voices are heard,” White said.