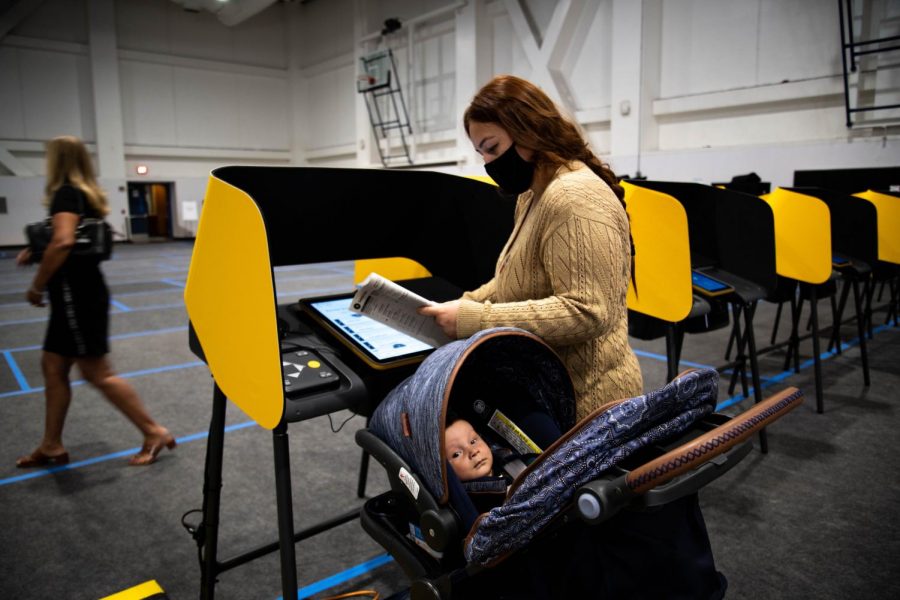 Miranda Martinez votes at the CSUN voting center with her baby, Ezra Martinez on October 30, 2020.

For the past month leading up to the elections, local officials, advocacy groups and public figures have worked to increase voter engagement. Some hot topics on the table this election include racial inequality, environmental issues and the response to the COVID-19 pandemic.

With so much on the line, CSUN’s political clubs and organizations have continued their work to educate and engage students and young people.

Voter engagement is a practice to encourage people to mail in their ballots or go to the polls on Nov. 3. Young people generally vote in smaller numbers, according to Lawrence Becker, a professor of political science at CSUN.

He explained that when someone votes once, they are more likely to vote in future elections.

Ashley Luk, the historian of the CSUN Speech and Debate Team, used Instagram as a resource to encourage the team’s followers to vote.

Through the team’s Instagram stories, Luk featured resources for fact checking and information about where followers can vote and drop off their ballots.

During the final presidential debate on Oct. 22, the speech and debate team hosted a watch event in collaboration with CSUN Act Now. CSUN Act Now is an initiative to engage students in the upcoming elections through informative and virtual events.

A discussion moderated by students from the speech and debate team followed the virtual watch party where more than 70 students attended the event.

The event also featured a live chat during the showing of the debate. According to Luk, the chat was thriving. She believes that being able to chat with fellow peers about political events increases the political engagement amongst students.

“Go vote!” Luk said. “Get your voice out, it’s so important that we as citizens do our part.”

Becker said the national voting pattern among young people tends to be more progressive, and that they are more likely to vote for a democratic candidate and policies that are more progressive than conservative.

He said that the number of undecided voters is decreasing. This is especially true for presidential elections where a candidate runs for re-election. Voters either approve or disapprove a president’s current performance.
Becker also encourages voters to remember that they are not just voting for the presidency, but the rest of the positions on the ballot as well.

Furthermore, Becker stated that, despite not being a close race, votes also matter in the presidential election.

“What’s on the Ballot,” an online event organized on Oct. 7, broke down all of the propositions and discussed the arguments for and against each of them. This was accompanied by a detailed background into each of the arguments behind them and a presentation on the roles and responsibilities of those elected into office.

Leslie Aguirre, former president of PSSA, explained that the purpose of this was to help students do their research on the candidates in order to better decide who would be the best person to be elected.

“These issues that we are seeing are not going to go away regardless of who’s voted into office and that there needs to be consistent involvement and interest in political organizations for us to address things that we care about as students,” Aguirre said.

Aguirre also participated in a similar event for the TRIO program at CSUN on Oct. 22, organized by associated students. TRIO is a program that focuses on supporting students from disadvantaged backgrounds in their college careers.

She had a more focused intimate conversation with students in the program on the propositions, as well as connecting them with resources where they can do their own research.

Ryan Marty, the president of CSUN’s chapter of Turning Point USA, has also done most of his reaching out to students via Instagram.

The chapter held an off-campus in-person event to remember the victims of 9/11. At the event, they also talked about the upcoming election and encouraged attendees to vote.

Marty said mainstream media can sometimes sway the opinion of viewers, so undecided voters should look out for fact-based reporting rather than opinionated statements.

CSUN is hosting its own voting center this year, which is available for early voting. It is located in Redwood Hall Room 160 on the east side of the campus near Zelzah Avenue and Plummer Street.

The center is open from 10 a.m. to 7 p.m. until Nov. 2. On Election Day, the vote center will be open from 7 a.m. to 8 p.m. Free voter parking is available at lot F5, directly west of Redwood Hall, accessible via Zelzah Avenue.

There are over 400 ballot drop boxes available throughout the county. The boxes provide a contact-free alternative to in-person voting, and will be collected and counted sooner than a mailed-in ballot. The Los Angeles County Clerk also offers a tool to check your ballot status.

The deadline to register to vote was Oct. 19. However voters may still complete same-day voter registration on Election Day — Nov. 3.