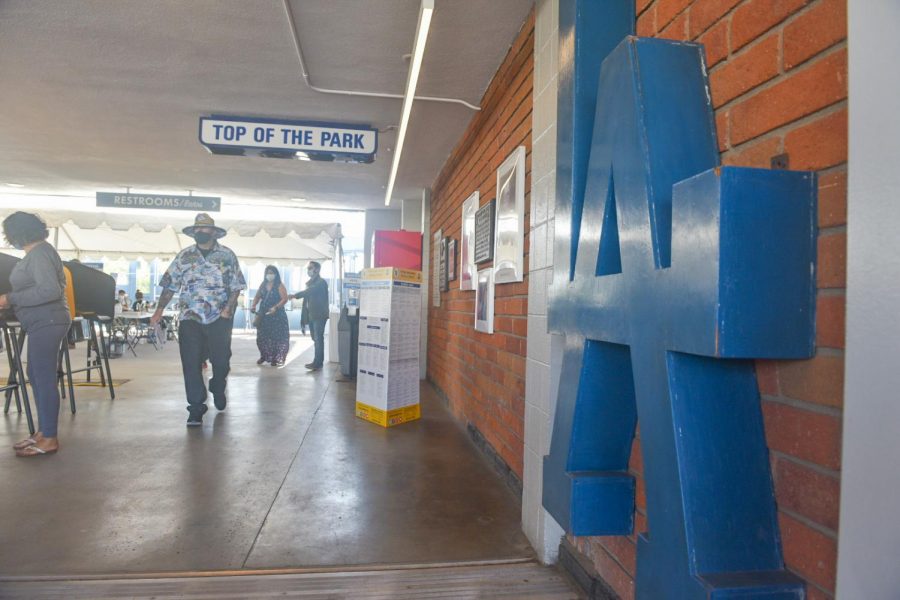 The Dodger Stadium will now serve as a voting center for the 2020 Election. Face coverings are required while inside or while waiting in line.

The Dodgers won the World Series on Tuesday, a week before Election Day. Dodgers fans were excited, as they tried to flood to the stadium to celebrate the win. Now, the stadium is an opportunity for fans and residents to turn in their ballots.

Iconic landmarks across Los Angeles, including the Dodger Stadium, will serve as vote centers for the 2020 General Election.

At the stadium, voters have the opportunity to take a photo with their Dodgers-themed “I voted” stickers with the field in the background after turning in their ballots.

The entrance to the voting center is on Vin Scully Ave and Stadium Way. Free parking is available at the top deck parking structure. Face coverings are required while inside or waiting in line.

The facility is organized with signs placed 6-feet apart for one direction foot traffic as well as hand sanitizer dispensers available upon arrival and near the key stations. The Dodgers team store is closed but restrooms are open.

When inside, a volunteer will ask if the voter is turning in a ballot or filing out their ballots using the ballot marking devices. Voters are encouraged to take measures to speed up the voting process to limit their time in the center by verifying voter registration in advance and using the Interactive Sample Ballot to pre-mark selections.

Staples Center, the Hollywood Bowl, Universal Citywalk and The Forum are some of the other iconic L.A. landmarks operating as vote centers.

First time voters Charisma Menendez, Samantha Menendez and Christina Gavia chose to turn in their ballots and vote on site at the Dodgers Stadium. They said the experience was great, However, they said there could have been more information provided about the propositions for first time voters.

L.A. resident Taylor Cleveland said she took her time researching the measures and propositions on the ballot this year and she wanted to turn in her ballot early.

“I felt like it was important to get my vote in earlier and also make sure everyone I know has all the resources they needed to vote, not just for the presidential election, but things like our representatives and all our ballot measures,” Cleveland said. “This year was a bit harder because I really dug into our ballot measures to see what I was voting on and just fact checking. It took me a lot longer but I’m really proud and happy that I did that this year.”

Although California and L.A. County mailed registered voters their ballots on Oct.5, Cleveland said people will still head out and cast their ballots.

“[California has] done a lot to make it easy for people to vote, no matter how they feel about the pandemic, everyone I think still feels the urgency to vote, more so than usual, but nothing about the pandemic has stopped them,” Cleveland said.

Curbside voting is also available outside of Dodger Stadium for voters who are unable to enter the vote center. Metro will be providing free fares on buses, rail lines and bike share on Election Day.