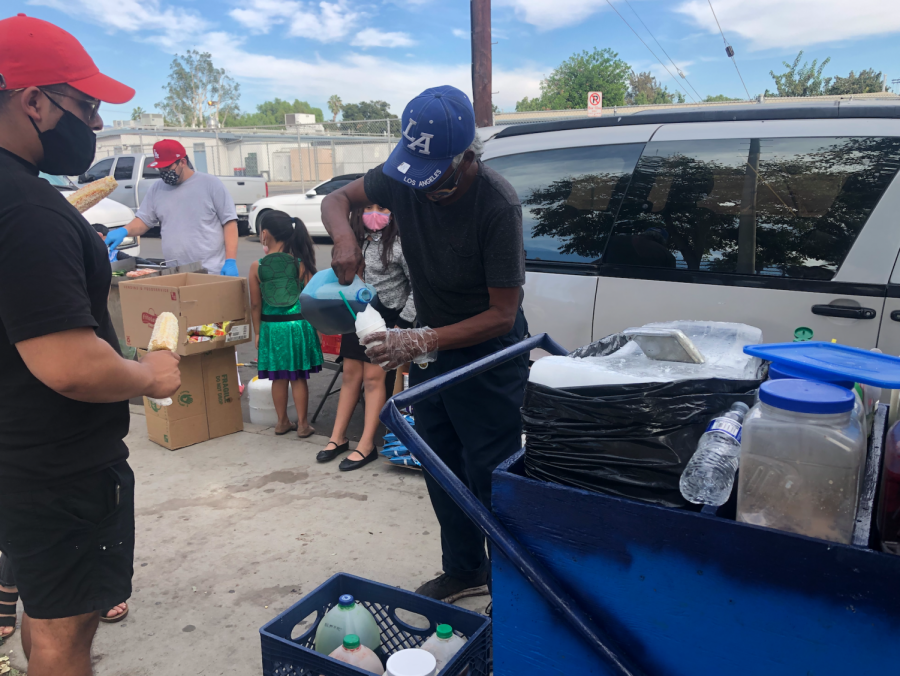 Jose Juan works at his stand during the buyout.

Las Calles Del Valle, a community organization that supports street vendors, hosted a buy out event on Saturday for street vendor Jose Juan and his wife Irene Gonzales who were recently evicted. Around 50 people attended the event in Van Nuys to help raise money for the vendors to give them a safe living situation and raise awareness for street vendors in their community.

A long line formed down the block near Delano Park as the smell of chorizo, asada and other meats wafted through the air. Even though most attendees wore masks and practiced social distancing there was still a communal atmosphere surrounding the event.

Las Calles Del Valle regularly organizes buy outs and other events to support street vendors who are victims of harassment, assault and racism.

The group connects with vendors with the help of other activist groups like People’s Struggle, as well as the Los Angeles Tenants Union.

Las Calles Del Valle was made aware of Juan and Gonzales through the Canoga Park chapter of LATU. Juan and Gonzales, immigrants from Mexico, were illegally evicted in October due to rent complications and found themselves unhoused.

The L.A. Tenants Union got them back into their home and the group is currently working to find the couple a more suitable living space.

The buy out attendees waited patiently in line to buy tacos and raspados, a Mexican dessert, prepared by Juan and Gonzales. Music played over speakers as Las Calles Del Valle organizers sold buttons and organized the tips given to the vendors.

Residents said that Juan has been working near Delano Park for the past 10 years and that community support in Van Nuys is strong.

“Everybody here cares about each other,” said Christopher Linares, a Van Nuys resident. “He’s the local raspado man. Everybody sees that he works hard, so everybody comes to support.

“I came here to support the local street vendors, you know, support La Raza. I heard they were in need, so of course I came to lend a helping hand. Whatever we can,” Gomez said.

A member of People’s Struggle of San Fernando Valley and the North Hollywood chapter of LATU, who wished to be identified as Rubi, said that events like the buy out strengthen community relationships and motivate her to continue working in activism.

“Community protects you, community saves you. Elections come and go, politics come and go, the community can stay forever — you just have to build a stable structure within it,” Rubi said.

Gonzales said through a translator that even though her eviction was frightening, she is grateful for the support.

“I’m really happy and thankful that the community is helping out,” Gonzales said. “I’m very thankful with God and everyone here.”