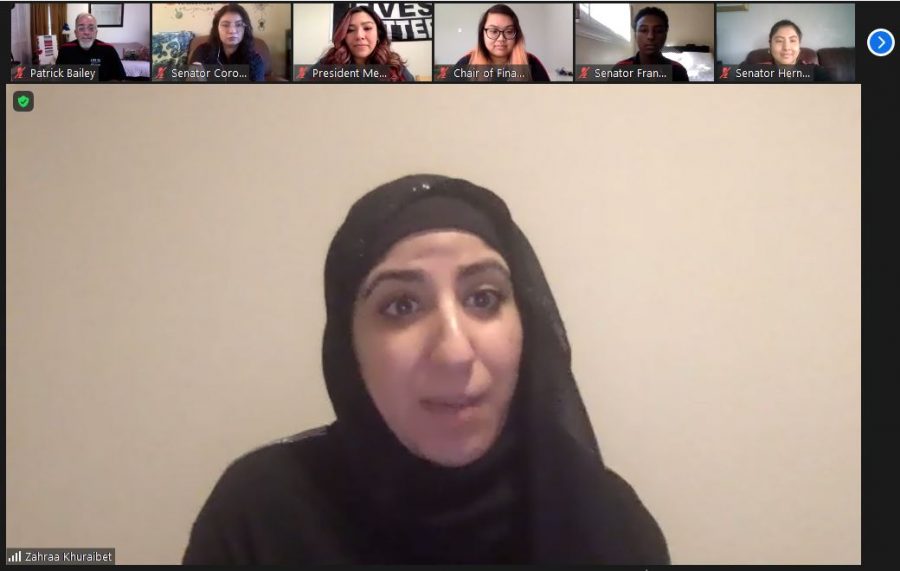 Zahraa Khuraibet spoke at the Associated Students meeting on Nov. 2.

During Monday’s Associated Students meeting, a motion to approve the appointment of former AS Vice President Zahraa Khuraibet as a graduate senator to AS failed in a split vote.

Khuraibet applied for an open senate seat as a graduate senator and completed an interview before a motion was presented to the senate cabinet.

Khuraibet has a long history of student governance at CSUN. She served as AS Vice President during the 2017-2018 academic year after serving a year as a finance committee member and a year as a senator at large.

She is currently the sitting president of the Cal State Student Association, a student-led organization recognized by the California State University Trustees and California legislature as the official voice of CSU students.

Coronado briefly spoke before the senate regarding the interview with Khuraibet.

“I really appreciate the experience that she has and the things that she had to say, such as trying to engage more graduate students, as they’re not as engaged as undergraduate students and other colleges as well,” Coronado said. “I think she’s a great candidate and the interview went great.”

Senator Michael Meeks was the first to object to the appointment, stating that Khuraibet would not fit the current AS Senate culture.

Meeks cited two reasons for the objection, which involved criticism of Khuraibet’s decision to remove the CSSA’s Social Justice and Equity Committee. Meeks said that Khuraibet once served as the chair for the committee and decided to remove it because it did not gain the traction and progress that Khuraibet hoped for.

“The next group of people that came to lead the [SJEC] community felt like they could do something with it and Zahraa still felt like it was something that needed to go,” Meeks said. “I just think we need more creative leadership that listens to folks, especially before we eliminate things as important as the focus space for social justice and equity.”

Meeks recalled the time that he worked with Khuraibet on a search committee at CSUN. According to Meeks, Khuraibet divulged confidential feedback to a candidate in which Meeks critiqued the person’s qualifications.

“I do think a conscience is important and from my firsthand and close experience, I just don’t feel those ethical lapses to be a good fit for the environment that we’re trying to foster,” Meeks said. “It would be neglecting my responsibility for not sharing it with you.

The senate did not allow Khuraibet to respond to Meek’s comments. In a statement to the Daily Sundial, Khuraibet said that throughout the various roles she held at the CSSA, she found that the SJEC was not utilized to the best of its capacity.

Khuraibet believed most of the committee’s work became redundant. She said that during her role as chair of the committee, she found that many social justice issues were put to the side because they were overshadowed by the work of the CSSA’s Board of Directors and the systemwide committee.

“I found this deeply problematic because every decision with the organization should be centered around social justice,” Khuraibet said.

According to Khuraibet, one aspect that Meeks did not mention was that she authored language within the CSSA values and constitution that took a stance on its mission statement towards the pursuit of social justice.

“Therefore, everyone within the organization from staff to students must center their work on social justice rather than this huge responsibility falling on a small committee,” Khuraibet said. “Additionally, I wanted to ensure that everyone would be held accountable for this standard.”

Vice President Deion Turner asked the interview panel if Khuraibet’s current obligation as CSSA president was addressed during the interview and asked for more context.

Coronado confirmed that Khuraibet’s time commitment was addressed during the interview and said that school and CSSA commitments would not impact her work with AS.

Merida confirmed that scheduling was addressed during the first interview.

At the end of the discussion, Turner thanked Meeks for his willingness to share his concerns.

“I too have felt the same sentiments about this candidate. So, thank you,” Turner said.

The motion went to vote and split in a decision of six “yes” votes, seven “no” votes and four votes to abstain.

During the attorney general report, Jacob Akopnik announced that Senator Jalani Ligons vacated his position as senator because of attendance reasons. Ligons served as a member of the Internal Affairs Committee.

The Senate Standing Rules limit the amount of unexcused and excused absences that a senator can accumulate. If a senator exceeds the attendance limit, they will automatically vacate their seat on the committee.

Ligons’ departure marks the fifth open senate seat that remains to be filled for the 2020-2021 year. Akopnik encouraged the senate to continue to recruit potential senate candidates.