Snowe is the hope for the party of no 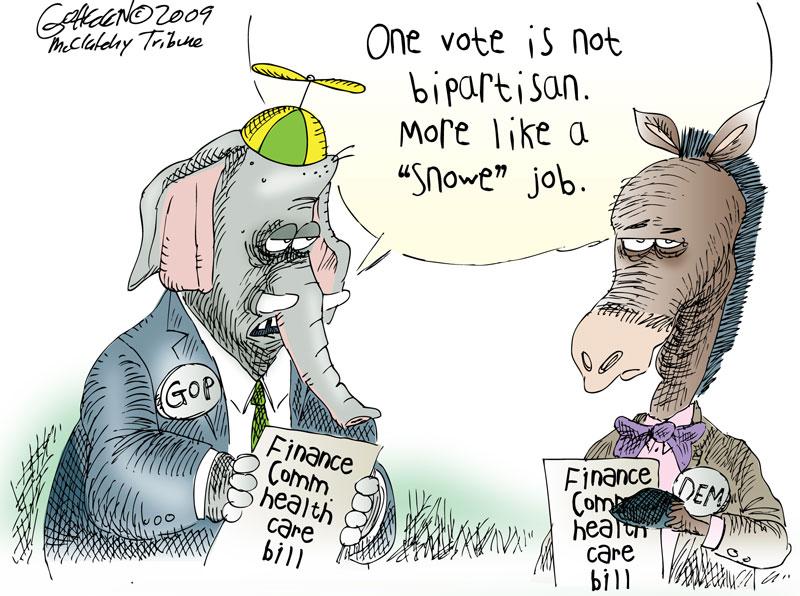 Senator Olympia Snowe, R-Maine, was the only Republican to vote for the Senate Finance Committee’s bill on health care. Could she be the hope for bipartisanship, and for the party of no?

With its constant obstructionist votes, the Republican Party has become known as the party of no, rejecting every issue which President Obama has raised. In his quest for bi-partisanship he has been met with nothing but opposition from the Republican Party.  Suddenly, there is a breath of fresh air, Senator Olympia Snowe, R-Maine, who voted yes for the Max Baucu $829 billion health care bill. Is there light at the end of the tunnel?

“I think that if we can work continuously together looking at the issues having an honest discussion about the issues and what works, what doesn’t work, that’s what it’s going to take,” said Snowe when asked about bipartisanship by Charlie Gibson in a recent interview.

Orphaned at nine years old and widowed at 26, Olympia Snowe has a certain sensitivity to life’s problems that most senators and/or most Republicans don’t possess. Although widowed in 1973, she remarried in 1989 to then Governor John McKiernan of Maine. The youngest Republican woman ever elected to the U.S. House of Representatives, she was the first woman to have served in both houses of the U.S. Congress. In her 35 years as an elected official, she has never lost an election. She supports legalized abortion and gay rights, but also supports the death penalty and gun control following the Columbine High School shooting in 1999.

The Republican Party has been so resistant to change.  No matter what Obama brings up, they are opposed to it. He ran on reforming the health care system, but the Republican Party wants no part of his health care reform. In his first day in office, Obama promised to close Guantanamo Bay prison by year’s end. Republicans have done nothing but complain about where the prisoners are going to go, and certainly not in Republican neighborhoods.

The economy is showing signs of turning around, but Republicans focus on the high unemployment rate and the sluggish housing market.

The war in Iraq is winding down, but Republicans charge that we haven’t done enough nation building.

Obama has improved relations with Russia, helping to pressure Iran into an open international inspection of secret nuclear facilities. Republicans complained that we were negotiating with terrorists.

After polling 24 countries, the Pew Research Center, showed the improved image of the U.S. in most parts of the world, reflecting a new global confidence in Barack Obama.  The Republicans only pointed to not wanting any part of Europe or it’s socialized medicine.

Even with Obama winning the Nobel Peace Prize, Republicans criticized that it was too much too soon.

It’s time for there to be a voice of reason from the Republican Party, a voice like Olympia Snowe.

Although Snowe is considered liberal on social issues, she is more conservative on defense and fiscal issues. An advocate of stem cell research and pro-choice, she is a hawk on foreign affairs, supporting Clinton’s involvement in Kosovo and Bush’s invasions of Afghanistan and Iraq, but she opposed the Bush tax cuts of 2003.

She has been a strong supporter of the Obama administration, particularly the TARP funds and the American Recovery and Reinvestment Act. She has also pledged to work in bipartisan manner on the issues of health care reform and energy.

With Sarah Palin becoming such a disappointing candidate, it is time for the Republican Party to look for more of a stable female candidate, one that is more in touch with the rest of the country. Having served in the Senate for three terms, Olympia Snowe has more Senate experience than Hillary Clinton. Snowe has fundraising ability too, raising $2.1 million seven months before her election to the Senate in 2006.

Snowe is a traditional conservative when it comes to assisting the growth of small business, but liberal on social issues like funding for child care and student loans. She’s a well-rounded person, not chained to the Republican Party line, but independent enough to vote her own conscience.

It’s time for the Republican Party to choose Olympia Snowe as the leader of their party.