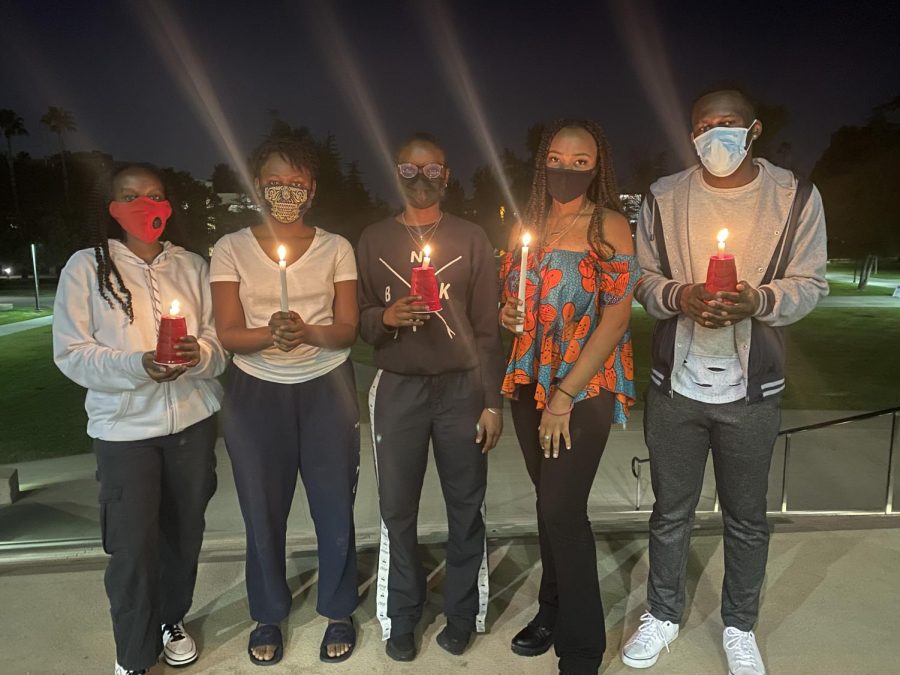 Five members of the CSUN African Student Organization met atop the steps of the Oviatt Library on Wednesday night to hold a candlelight vigil in an effort to raise awareness of multiple humanitarian crises occurring throughout Africa.

The organization held the event to bring attention to the EndSARS campaign in Nigeria, protests in Namibia against sexual and gender-based violence and the Anglophone crisis in Cameroon.

The EndSARS movement in Nigeria sparked protests after many Nigerians accused the Special Anti-Robbery Squad of being a corrupt and violent police organization. SARS was created in 1984 in reaction to a spike in crime across Nigeria, but over the years it evolved into a crime syndicate.

According to Amnesty International, the organization carried out over 80 cases of torture and executions in the past three years.

Udeh stressed that SARS is not the only crisis in Africa that Western news outlets should be paying attention to.

In October, protesters and activists in Namibia demanded that a state of emergency be declared following a rise in sexual and gender-based violence, particularly femicide, in the country. Protesters also called for the resignation of their gender equality minister and demanded deadlines for the change that needs to made by the Namibian government.

In Cameroon, unrest resulted from feelings of systemic and political marginalization of Anglophones — English speakers — beginning in late 2016. The country, which gained its independence from France in 1960, has a French-speaking majority. Many Anglophones say that marginalization started following a complicated reunification of the country after its separation from France.

Udeh said one of the reasons the organization wants to bring attention to these issues is because they feel that media coverage of African issues has been waning recently.

“Where’s the momentum, where did that go? People are still suffering, Africa is still bleeding, right?” Udeh said. “No one is talking about it, where’s the news? Everything died out, and it shouldn’t have.”

The group did not seem fazed by the low turnout to their event citing the election, COVID-19 and exams as reasons why many could not make it.

“We appreciate the people who did show up and we appreciate the support,” Udeh said. “There’s other ways to support. You can always show up to our club meetings, follow us on Instagram and keep updated that way. We understand that if you couldn’t make it, there’s probably a reason.”

On ASO’s Instagram page, some posts use hashtags associated with bringing awareness to crises in Africa, including #Congoisbleeding, #Anglophonecrisis, and #Amharageonocide, each pertaining to a specific issue in a country or region in Africa.

At the end of the vigil, all five members stood in a circle and made statements regarding which issues they wanted to commemorate before blowing out their candles one by one.

The CSUN ASO meets at 5:30 p.m. every Wednesday via Zoom.