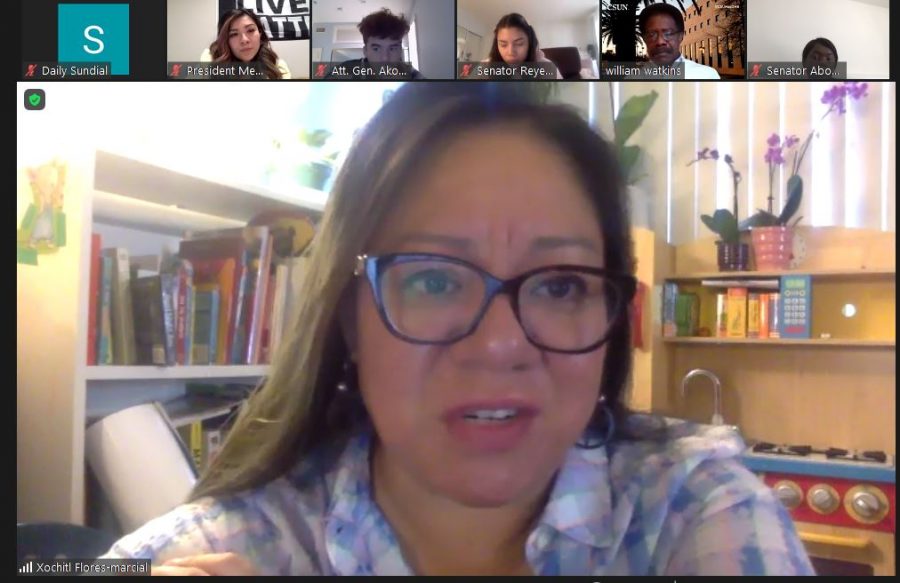 The Oviatt Library Advisory Working Group presented their recommendation to remove Delmar T. Oviatt’s name from the library and the adjoining lawn during the Associated Students Senate meeting on Monday.

AS voted in favor of approving the recommendation of the AWG to remove Oviatt’s name from the library, with 15 “yes” votes and two abstaintions.

“We looked at his record, and we looked at it from various lenses and current perspectives and a social justice perspective,” Watkins said. “We looked at what he did — or did not do — in and around the creation of the ethnic studies departments, and then we took a hard look at how he lived during the moment of crisis.”

The committee recognized Oviatt’s early contributions to the campus but acknowledged that during his interim presidency, his leadership failed to align with CSUN’s values and expectations.

“We found that in many ways that he operated in a manner that we would agree was oppressive and did not support the diversification of our student body, our faculty and our curriculum,” Watkins said.

It took over a year for the group to investigate and evaluate the legacy and actions of Delmar T. Oviatt, who was briefly appointed acting interim president in 1969 during a time of intense campus protest.

AWG reviewed archived news articles from the Daily Sundial, committee recordings, interviews with Oviatt from 1971, and spoke with a few individuals who had first-hand experience with Oviatt or the 1968 and 1969 protests.

The archive efforts were led by advisory group AWG members Xóchitl Flores-Marcial, an assistant professor from the Chicana/o studies department, and Ellen Jarosz, head of the Oviatt library’s special collections and archives. Flores-Marcial enlisted a group of students enrolled in her history of the Americas course to scour the sourced materials.

The report stated that Oviatt’s action “reflects a tremendous failing that cannot be corrected and will ever serve as a blemish upon the legacy of CSUN leadership.”

Not all members of the advisory group agreed when it came to whether or not Oviatt was racist in his actions. According to Watkins, some committee members felt there was no evidence that Oviatt was overtly racist by his actions but agreed he was out of touch with the student body and their demands.

“The evidence that we looked at and the conversations that we had on this topic were incredibly heated,” Flores-Marcial said. “I will say that they were incredibly intense. There was no doubt in my mind of what the evidence was telling us.”

The committee found it unsettling how Oviatt repeatedly referred to students of color as “militant” during a 1971 interview with a former U.S. history professor, William Ardell Stelck, and during a separate interview with the L.A. Times, Oviatt stated that by putting Black students together in the dormitories they had recreated the “ghetto.”

“We also found that there was the decision on his part to close the campus down on one occasion rather than permit free speech to occur,” Watkins said.

The AWG also found fault in Oviatt’s actions of often relying on the Los Angeles Police Department to handle student protests, which led to the arrests of 275 individuals.

“We found that there is a gross use of LAPD, which at that point in time was absolutely notorious for being clearly racist police department,” Watkins said. “Which was certainly something that anyone who had a desire to know, would have known about the behaviors of LAPD coming onto our campus.”

The report stated that as a leader, Oviatt had the responsibility of protecting faculty and students at CSUN and demonstrated poor judgment and unwise decisions, and “he was obviously not progressive enough nor the right person at that time for the job he was thrust into.”

Senator Adriana Coronado, who represents the College of Humanities, asked Watkins what the library’s new name will be.

Watkins said the library will be unnamed and incoming CSUN president Erika D. Beck will oversee the name change.

The AWG noted that there are no current procedures or expectations within the university’s existing building and facility naming policies to review the record and background of an individual or organization to ensure the honoree aligns with the university’s values. Nor is there a process in place that addresses a procedure for reconsidering currently named buildings.

Senator Michael Meeks, the chair of External Affairs, wanted to know what policies will be implemented for future naming conventions.

Watkins said that donors who contribute money to the campus under the current policies are typically recognized with a building or facility named in their honor. He said that there is a procedure that speaks to consulting with faculty for the naming of academic buildings. However, there is no established policy that states what the university should consider before honoring an individual.

According to the AWG report, CSUN does not have a procedure in place to evaluate claims made against an individual in which a building is named after, but adopted guiding principles from a Yale University report that deals with the removal of an individual’s name from a facility.

The AWG report will be submitted to the Faculty Senate for review and will go through a similar voting process. If the senate agrees with the removal of Oviatt’s name, President Dianne F. Harrison will submit a recommendation to the CSU Board of Trustees, who will decide the fate of the library’s name.

Records and information on Oviatt’s historical impact at CSUN can be found in the Oviatt Library’s digital collections.