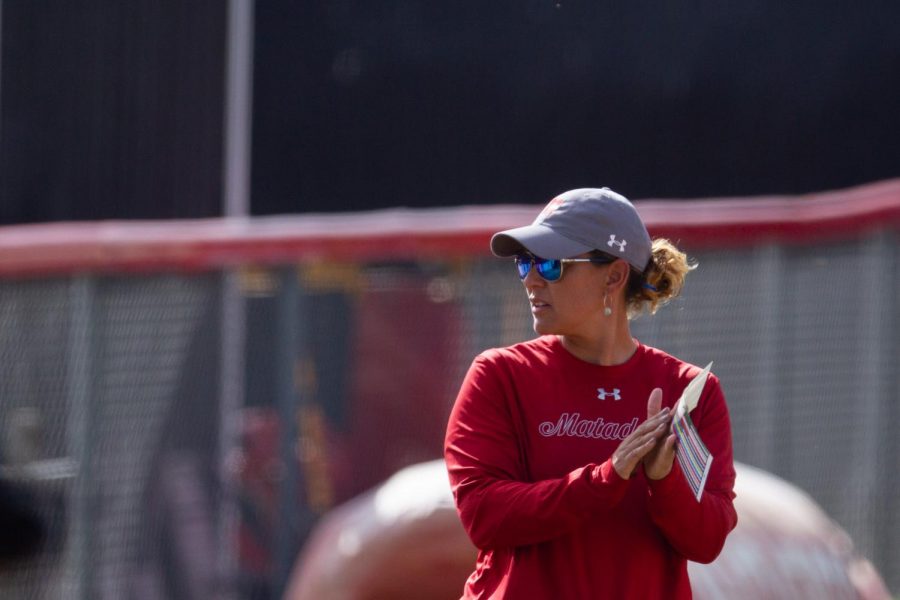 Tairia Flowers, head coach of the Matadors softball team since 2011, has resigned.

Tairia Flowers wasn’t thinking of leaving CSUN. It never even crossed her mind throughout her 10 years at the helm of the softball team, during which she became the second-winningest coach in program history.

But then her phone rang on a Monday evening in October.

Loyola Marymount University, who had just lost their previous head coach to Texas Tech University, asked Flowers if she was interested in becoming the next head coach of the Lions.

“It was kind of shocking at first,” Flowers said. “But it was something that I thought I owed to myself to at least take a look at.”

Flowers sat down and made a pro-and-con list for each school, but ultimately decided that it was time for something new. She resigned from CSUN on Oct. 26 and was introduced as the head coach at LMU later that afternoon.

“I was so emotional having to tell my players, my team, my family, that I was going to leave them. That was probably one of the hardest things I’ve ever done,” she said. “But timing wise … my husband was no longer at CSUN, and I had a pretty good run while we were at CSUN. And we were kind of in this holding pattern with COVID. I don’t know if that really went into the decision, but it was probably a little easier to entertain it when you know you’re not all together.”

Flowers’ husband, Jason Flowers, resigned as head women’s basketball coach in April. He has since joined the women’s basketball staff at Cal Baptist University as the director of player development, which means that the Flowers family won’t be coaching at the same school for the first time in over a decade.

“It’s different but when we both first got into coaching, this is how it was. That’s why we were at CSUN for such a long time, it was such an ideal situation,” she said. “But that’s what happens in life. You have to grow and sometimes be a little uncomfortable to see that growth.”

With CSUN now in her rearview mirror, Flowers is focused on building LMU into a perennial playoff contender. She believes the facilities, the campus and the quality of education there can serve as useful tools for recruiting. Although it was by no means an easy choice, Flowers feels at peace with her decision.

“Deep down, I’m a Matador too,” Flowers said. “But I’m excited for this next journey.”

As for the Matadors, the search for her replacement is underway.