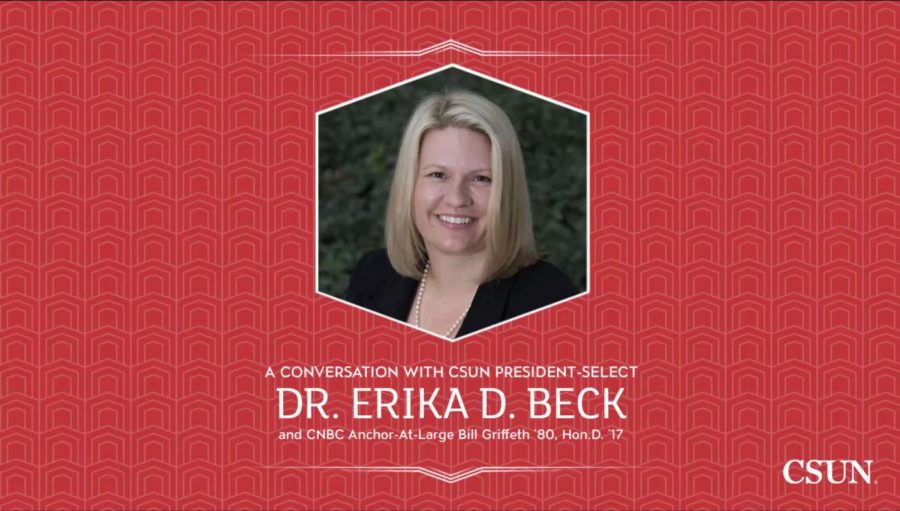 Incoming CSUN President Erika D. Beck shared some of her goals for the new year with CNBC Anchor-At-Large Bill Griffeth, in an event called “A Conversation with CSUN’s Sixth President-Select” on Thursday.

Throughout the course of the conversation, Beck shared her goals for the new year, as well as some personal anecdotes about her family and her upbringing.

Here are the key takeaways from the conversation.

Addressing CSUN’s budget issues
Beck will begin her work as president during a time when CSUN’s budget and the larger CSU is suffering financially.

She plans to engage in public-private partnerships and philanthropic investments from alumni and community members. Beck is also looking to increase sponsored projects, grants and project funding.

“Often, what gets in the way of our student success is the belief that they will be successful,” Beck said.

Refocusing on developing professional telework skills
Beck applauded both faculty and students for adapting to the challenges brought forth by the pandemic. One of her goals is to increase the skill set CSUN classes can offer to students.

“Telework is here to stay in one capacity or another, and it’s surprising on a number of levels, how much it’s shifted thinking,” Beck said. “And I think what that says is that we need to, as educators, be thinking about how we prepare our students for new skill sets to thrive in those new spaces.”

Building social capital and relationships can be tricky in an online-only environment, but it’s a skill that she believes students should begin building in their classes.

Bringing back alumni into the CSUN sphere
Engaging with CSUN’s more than 370,000 alumni is a main priority for Beck. She said she wants to learn how to better engage alumni with CSUN, to find ways for current students to learn what skills will be required in career fields that alumni have paved the way toward.

“I’m really excited to understand how to bring as many of the alumni back as mentors, to open doors for internships for our students, to help us get recognition for the extraordinary quality of the academic programs, the research programs across a whole variety of dimensions.”

Breaking down administrative barriers for students
Navigating various offices on campus can be difficult for students — especially for first-generation students.

“Administrative barriers are real and the students have no agency to remove them,” Beck said.

Beck said she wants to reinterpret some of the antiquated systems so the institution serves its students. She wants to ensure equity gaps close and a path to graduation is clearer for students to be successful.

Beck values athletics
Beck comes from a family of athletes and her two other sisters were athletes as well. Beck played soccer competitively until she got to college, where she became more involved in her studies.

The beginning of her career in academia
Beck picked up a psychology textbook left in her middle school classroom, and read the entire book at the age of 12. She followed her fascination in the field to UC San Diego and conducted undergraduate research.

She knew she wanted to be a professor, and followed the passion. Beck taught her first college course at the age of 22, as a graduate student at San Diego State. Her career was headed towards research and her interests revolved around cognitive neuroscience.

She found herself at Nevada State College, where she served as the provost and executive vice president. She created a new model in Nevada for students who did not qualify for the other research universities in the state. She saw the opportunity to model the public college into one much like the CSU system, creating a pathway for students who wanted to work toward baccalaureate degrees.

Beck has served as president at CSU Channel Islands since 2016.

Beck’s leadership style is based on collaboration

Beck said she bases her leadership on equity, diversity and inclusion. She also said she takes a collaborative approach in terms of leadership.

“In order for us to come to novel solutions in the ways in which they are demanded because they are becoming so complex we need different thinkers at the table,” Beck said. “We need different lived experiences to inform leadership.”

Her vision will largely be shaped by input from the academic community. Throughout the course of the conversation, Beck pointed to data as a driving force in her decision-making.

“I am joining the university, the university is not joining me,” Beck said. “So that will take time for me to understand what that looks like.”

Beck is a mother, daughter and sister

Beck grew up with two sisters in a household run by a single mother in Northern California. Her family placed a value on education. Beck’s mother and grandmother encouraged her to pursue her own passions from a young age.

Beck is also a mother to two boys.“I’m balancing just like every other mother is balancing,” she said. “I’m incredibly fortunate that I have just such a great support system and such incredible little guys that appreciate and are proud of me.”