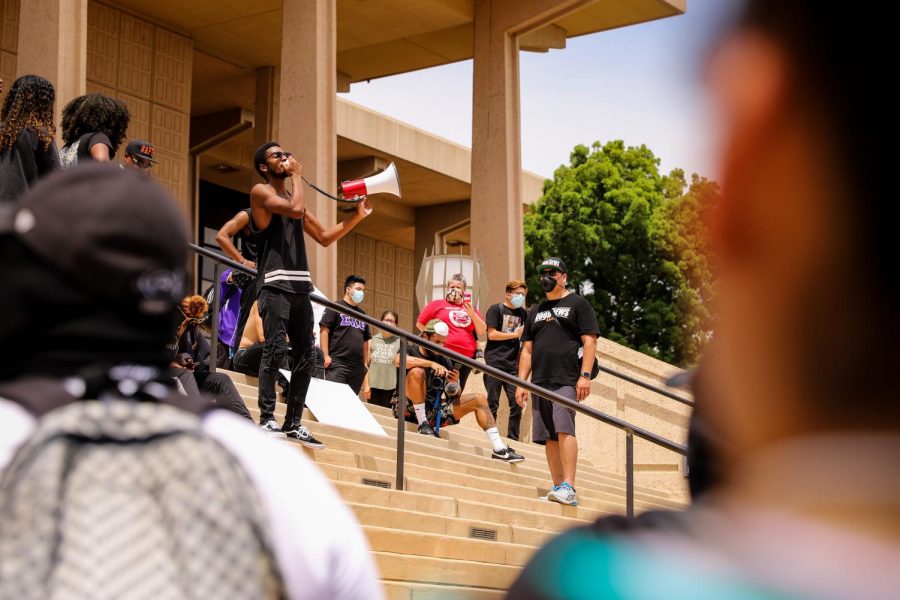 A protester speaks to the crowd of protesters in front of the Oviatt Library during the Northridge Black Lives Matter protest on June 2, 2020.

CSUN President Dianne F. Harrison announced in an email Thursday that 14 of the 52 projects requested for the recently created Diversity & Equity Innovation Grant program will receive over $500,000 in total funding.

The DEIG was created in August as an effort to increase “the presence and participation of traditionally underserved and underrepresented groups.”

Projects that will receive funding from the grant include an ethnic studies education pathway, a Black Deaf Life project and a CSUN Afro-Latinx project.

Although the money set aside for the DEIG fell short of the $2.1 million that was requested by its applicants, Harrison stated in her email that this was an example of CSUN’s commitment to the grant’s cause.

Harrison acknowledged CSUN’s looming budget crisis in relation to the grant, saying that although the university is facing significant setbacks, her cabinet felt that it was “important to continue funding our commitment to diversity, equity, inclusion, access, social justice and anti-racism efforts across our campus.”

The grant program falls under the umbrella of CSUN’s 10-point campus action plan, which was created to provide the framework for “advancing diversity, equity, and inclusion for Black students, faculty, and staff.”

The application window was open between August and Sept. 30. Applicants submitted a two-page proposal for grant funding. Projects that involved “potential for broad institutional impact” were given special consideration, followed by “sustainable and replicable” projects.

Proposals were to include but were not limited to efforts to increase the recruitment and retention of Black students and/or faculty and staff, as well as efforts to “create and support an inclusive campus and community environment”.

Grant funding does not cover expenses for food, travel, office furniture, living and/or childcare expenses, laptops, computers, or any other electronic equipment.

“While these grants represent a fraction of our collective effort to improve diversity, equity and inclusion on campus, they are an important step,” Harrison said in the email. “I look forward to seeing each of these funded campus projects launch and make a lasting impact.”

A full list of the projects approved for funding can be found on the DEIG webpage.