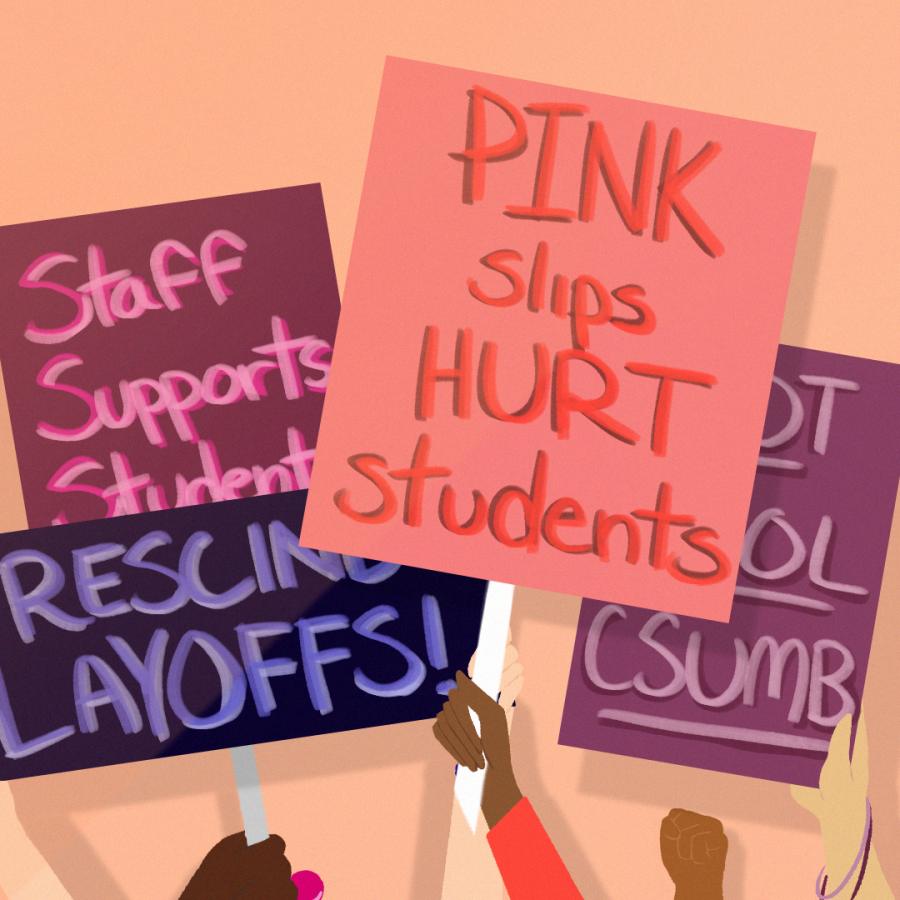 At the September and October CSU Board of Trustees meetings, a virtual protest occurred, as CSU staff, faculty, and union representatives took over the public forum to express their opposition to the recent statewide layoffs. They were demanding that the CSU Board of Trustees reverse the layoffs that have been issued to more than 300 employees.

As a result of the pandemic, budget cuts made to the CSU have forced campuses to cut costs and have led to layoffs across the CSU system.

Faced with a $54.3 billion deficit, the state of California permanently cut the CSU’s budget by $299 million per year. Both the state and the CSU have forecasted that this financial challenge is expected to last over the next three to four years.

As of Sept. 22, 303 California State University employees have received layoff notices, according to Joseph Jelinic, the chief negotiator at the CSU. Most of the layoffs affect support staff workers who tend the university grounds and maintain the buildings.

Union reps, staff and faculty have asked CSU trustees to save jobs by providing funding and resources to campuses that need financial support.

The state of California employs over 53,000 CSU employees, which are represented by eight unions.

Union employees from the CSUEU have received the most layoff notices. According to CSUEU Communications Officer Khanh Weinberg, the CSUEU has received 186 layoffs out of the 303 notices issued statewide.

CSUEU has received more than 4,000 signatures on a petition that urges CSU Trustees to stop layoffs. The organization will present the petition to the board at the next trustees’ meeting that is scheduled for early next year on Jan. 26-27.

Weinberg said over the past few months the CSUEU was able to reverse some of the layoffs after the union set up meetings with the campuses to discuss alternatives to the layoffs, such as job reassignments and employee buyouts.

Weinberg went on to say that the CSUEU believes that continued protests, combined with public support from local and state legislators, helped pressure the CSU to reduce the number of notices.

CSUN has also been affected by the budget cuts and is managing ways to limit the financial damage.

The university is currently facing a $33 million deficit for the 2020-2021 fiscal year, according to Colin Donahue, the vice president of Administration and Finance. The budget deficit represents 7% of CSUN’s $491 million general operating budget.

Donahue said the administration is addressing costs through a $12.9 million in permanent labor and operating expense reductions across campus divisions by implementing a pause in hiring, reducing equipment purchases, and delaying maintenance and construction improvement projects.

In an attempt to offset costs, the school is also using $20.1 million in savings. The university is planning to use roughly a third of its $57.4 million reserves and will save the rest to get through the next few years.

The administration is also looking for ways to mitigate layoffs on campus but could not escape a round of recent layoffs.

To date, six parking employees — information booth and parking attendants — at CSUN have received layoff notices due to a lack of work.

The bargaining group for CSUEU met with CSUN’s human resources on Oct. 15 to discuss the layoffs.

Catherine Hutchinson, the CSUEU vice president for finance and a biology technician at CSU Channel Islands, said the bargaining unit suggested that CSUN explore alternatives to layoffs by transferring employees into temporary positions.

Kristina De La Vega, associate vice president of Human Resources, confirmed that the administration is meeting with the CSUEU to explore reassignments as a way to mitigate layoffs.

Despite the CSUEU’s attempt to reassign the six impacted CSUN employees to other positions at the university, the bargaining unit’s proposal was denied during a Nov. 6 follow up meeting.

De La Vega said that the administration could not find alternate job assignments for the impacted employees because their job classification did not match the campus’s work needs.

The administration is still trying to retain employee jobs and has reassigned 20 other employees to new jobs from areas that were impacted by lack of work, according to De La Vega.

“We are continuing to explore areas that have work needs and we are optimistic [about] an opportunity [that] we just found can be explored this week,” said De La Vega regarding the six impacted employees.

Hutchinson said that the CSUEU’s next step is to negotiate to postpone the layoff date of Nov. 20 and attempt to secure continued healthcare coverage for up to six months for the affected employees after they are laid off.

Hutchison knows first-hand how it feels to be laid off. CSU Channel Islands attempted to lay her off in 2010, but through union negotiations, she was able to get the layoff rescinded.

“As a person who’s laid off, you go through all the emotions, and you feel personally targeted, especially if you’ve done a good job at the campus. Even though it’s not, you know, it still feels very personal,” Hutchinson said

She acknowledges the negative impact and she is committed to supporting the affected employees throughout this challenging time.

“I have people contact me all the time and fear what’s happening,” Hutchinson said. ”They’re terrified.”

If additional work cannot be found on campuses, union reps and their represented employees are demanding that the CSU use its $1.7 billion in reserves to mitigate the discharges.

“I urge you to reconsider the choices you have made to not utilize these reserves. These are supposed to be rainy day funds. Today is the rainy day,” said Kat Alvarado, an administrative support coordinator at SFSU, to the Board of Trustees.

According to CSU Chair of Finance Jack McGrory, the actual rainy day fund has $400 million and the remaining $1.3 billion is held for short-term debt obligations and capital needs.

In the 2020-2021 CSU Operating Budget, which was developed in November of 2019, $468 million has been assigned for costs that may occur due to a short-term recession or state budget fluctuation.

The CSU needs to save the money for the upcoming years of financial uncertainty, according to McGrory.

“That’s three weeks of operating cash. The general metric in the industry is that you should have three to six months in your reserve, and I think we’re looking at least two years of rough going,” McGrory said. “We’ve got to preserve as much of those resources we possibly can.”

Recently, the CSU has made some high-profile hires at salaries that are more than what their predecessors made. Unions and faculty have criticized the CSU for approving a 30% salary increase for chancellor-select Joseph I. Castro. Castro is expected to receive an annual base salary of $625,000, which is lower than some campus presidents who lead smaller state universities.

At the October CSU Board of Trustees meeting, the board approved salary increases for CSUN’s incoming president Erika D. Beck and CSU East Bay president-select Cathy A. Sandeen. The two president-selects will receive a 10% pay bump over their predecessors.

“We all know that our presidents are well and far behind the market,” McGrory said. “These two 10% increases just move them up a bit, but keeps them still far below the median salary.”

“This is totally consistent with our policy,” McGrory added. “We only get one chance to do this until their next performance evaluation because we’ve rejected the concept of across the board pay increases.”

Some trustees disagreed with the increase and said they were concerned with what message this would send to the CSU community.

“This is not the right time. My worry is that we need to send a message that we’re all in this together. And that we’re not creating an academic reverse robin hood where we give to the rich and take from the poor,” said Board of Trustees member Douglas Faigin.

Trustee Jane Carney empathized with those affected by layoffs but said it would also be unfair to perpetuate the hardships to campus presidents who are underpaid.

“It is heart-breaking to understand the layoffs that are happening, even though they are small in number,” Carney said. “[For] each person who is laid off, it is a tragedy. But the truth is there is never a right time to raise the pay of a president. When the president’s salaries are substantially below the median, and not even close to the median of comparable institutions, how can we say that we respect them?”

If layoffs continue to occur, the unions are prepared to go to arbitration, which is a method of resolving disputes without going to court. However, Hutchinson, a CSUEU rep, said that unions usually try to settle the matter before proceeding to that step.

In the meantime, the CSUEU continues to speak out at CSU board meetings, and contact state legislators to seek a remedy to this issue.

Hutchison and the CSUEU believe that staff are crucial in supporting the behind-the-scenes operations of the university. She said that sometimes staff members are overlooked because of the roles they play on campus.

“For us as a staff, it’s hard sometimes because we’re not faculty, so it’s hard for us to be heard,” Hutchinson said. “I think our students and everyone who works with us know that we’re the backbone, and we support everyone.”