Young voter turnout was record-breaking in the 2020 general election. Here’s why. 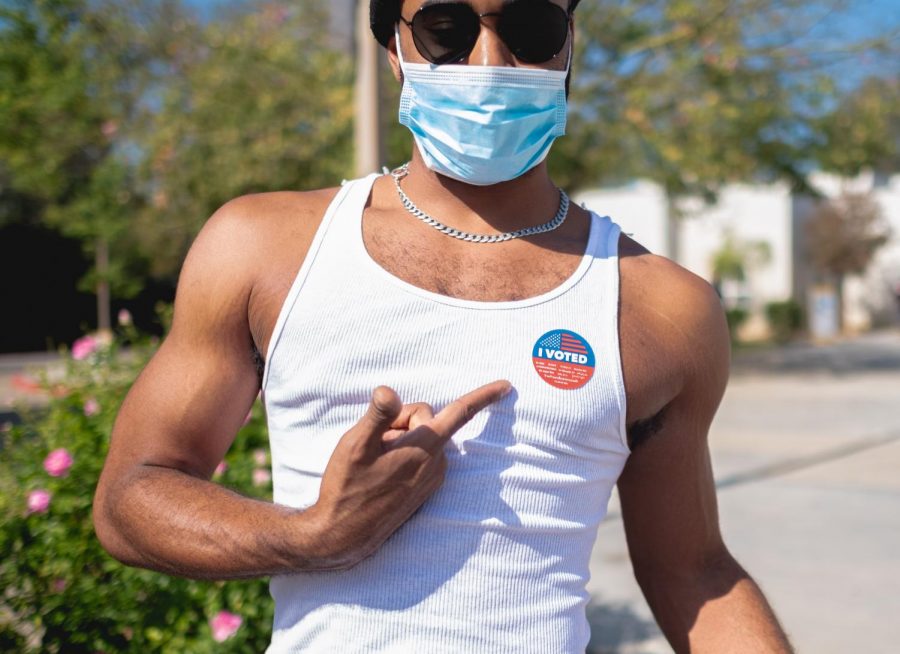 Joe Cleveland proudly gestures toward his "I Voted" sticker at St. Paul Methodist Church in Northridge, Calif., on Tuesday, Nov. 3, 2020.

Young voter turnout was record-breaking in the 2020 general election. Here’s why.
With a completed ballot in hand, Leslie Aguirre, a 21-year-old CSUN political science major and political activist, left her Van Nuys home and began driving through the San Fernando Valley to drop off her ballot.
On her way to CSUN’s voting center, she quickly realized there were more voting centers across the Valley than she thought. Stopping before her original destination, Aguirre dropped off her ballot at the orange metro line on Victory Boulevard.

COVID-19 has transformed the traditional voting process nationwide. Voters cast their ballots by mail, ballot drop boxes or in-person. In Los Angeles County alone, there were over 700 in-person voting centers allowing voters across the County to vote in-person with limited lines. Furthermore, every registered voter in California was sent a ballot via mail where they could drop it off at various voting centers.
“California, and Los Angeles specifically, are unique examples of making voting more accessible to people,” Aguirre said.

Roughly 75% of L.A. County registered voters participated in the 2020 election, a 6% increase from the 2016 general election, according to the L.A. County Registrar.

This election broke many nationwide voting records. The 2020 young voter block turnout — which includes voters from the age of 18 to 29 — surpassed the turnout from the 2016 general election.
Over 50% of eligible 18 to 29-year-olds participated in the voting process. President-elect Joe Biden received over 60% of those votes according to CIRCLE, a research institute out of Tisch College that focuses on young civic engagement.

In comparison, around 40% of eligible young voters participated in the 2016 election, according to CIRCLE.
The increase in voter turnout was a result of many variables according to CIRCLE researchers, with some pointing to the pandemic and others citing the fight for racial equality as a motivating factor.

Universities across the country made efforts to get their students to vote in the general election.

At CSUN, a group of prominent faculty and students came together to present CSUN Act Now, a civic engagement program that was created to educate the campus community and increase voter turnout. The group hosted a virtual bootcamp and educated the community about the importance of voting, as well as other topics such as voter suppression, voter fraud and the Latino vote.

Aguirre, one of the program’s organizers, said that the opportunity to educate her peers has always been empowering, but this year people took a greater interest in politics than usual.

“People were actually interested. Which is something new — at least new to me,” Aguirre added.

Aguirre has a history of civic engagement. She has been a part of many political engagement activities on campus, one of which involved bringing California’s Secretary of State Alex Padilla to CSUN to participate in a round-table discussion on voting with CSUN students and faculty.

CSUN President Dianne F. Harrison also encouraged students to vote this election in her statement to the campus community.

“One of our most important duties and privileges as a citizen of a vibrant democracy is the right to vote, Harrison said. “No matter what happens, I can assure you that our values as a university will remain intact.”
The campus was also home to a voting center in Redwood Hall.

Aguirre believes that the increase in young voter turnout has to do with young people wanting change for their future — something that has a lot of uncertainty with wealth inequalities, climate change and other generational issues.

“I think a lot of us are tired of how things are being run,” Aguirre said. “I feel that this frustration with leadership has resulted in us wanting to transform these systems.”

She added that it’s not just about voting and that there are many different means of political involvement, including protests.

For months, activists across the nation have been protesting against racial inequality, calling on young voters to exercise their rights and vote President Donald J. Trump out of office this election.

Their message seemed to get across, especially with young people of color. The Biden-Harris duo received about 87% of young Black voters’ vote, 83% of young Asian voters’ votes and 73% of young Latinos voters’ votes, according to CIRCLE.

The pandemic was a top priority for young voters nationwide this election, but for young Black voters, the main issue was racism, according to CIRCLE.

On a local scale, the Black Lives Matter Los Angeles chapter has been on a mission to get Los Angeles County Dist. Atty. Jackie Lacey voted out of office.

During her eight years in office, Lacey received strong criticism toward the latter half of her tenure for failing to prosecute numerous police officers who have killed people.

BLM-LA had achieved this goal this month when George Gascon, Lacey’s opponent, won the race, receiving roughly 53% of the votes according to the L.A. Times.

The Times analysis of the race shows that Gascon received the majority of his votes from urban centers, whereas Lacey received most of her votes from suburban cities.

Gascon received 58% of the votes in “plurality-Black neighborhoods” — neighborhoods that have a majority of Black residents.

With so much on the line this election, it seems as though young voters took advantage of the political opportunities and casted their ballot. Agurire says this is just the start.

“People are looking for different means for political participation. Whether it’s voting, protests or all these different things, a lot of it comes from being tired and upset,” Aguirre expressed.