AS continues discussion on alternate grading options with university provost 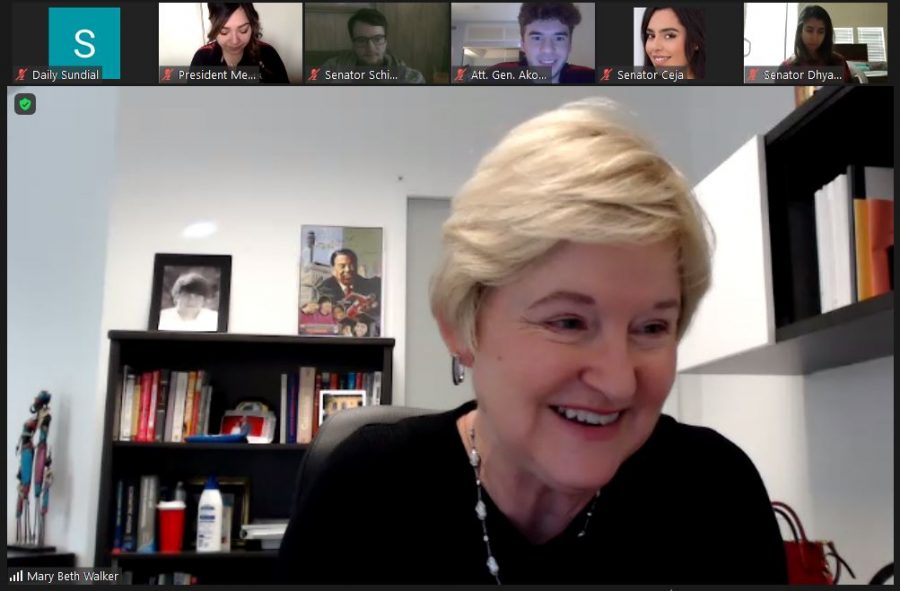 Senator Jonathan Hay, who initiated the special meeting through AS President Rose Merida, said that he heard from many students that with the move to virtual instruction, many of them are struggling to make it through the semester. He asked Walker if alternate grading options are feasible for CSUN.

Walker said that during the spring 2020 semester, the administration provided flexibility for students by allowing them to choose between a letter grading system or credit/no credit option.

While many students were happy about the flexibility initially, Walker said a record number of students asked to change their grading option at the end of the semester to a letter grade for various reasons.

Some students found that by choosing a credit or no credit grading option for select classes it did not end up applying towards their GE or major. In order for classes to apply toward their degree, the student would have to receive a letter grade.

Adams added that the California State University system has specific rules around GE classes. She said these classes must be taken for a letter grade in order to apply towards a student’s GE requirements. She said that CSUN does not have the flexibility to change this rule.

The option to implement grading alternatives does not benefit all students, Walker said. Veteran students who rely on financial aid or students who are in a graduate studies program may be affected by taking a class on a credit or no credit basis.

“We felt that it was not feasible for so many students, so rather than trying to carve out all these separate exclusions, we decided we would go back to standard grades,” Walker said.

Walker said that the administration’s goal would be to eventually make a permanent change to the grading system by increasing the number of courses with alternate grading options.

Hay asked if it was possible to allow students to drop classes in an easier way, such as moving the drop date to later in the semester without accruing a “W,” which stands for “withdrawal.”

Based on CSU rules, once the semester goes past the 20th day of instruction, students must receive a “W” if they withdraw from a class with permission, Adams said.

While a “W” cannot be removed from a student’s transcript, Walker said that there might be flexibility around allowing later drops for students who may be overwhelmed with their course workload.

The administration is forming a group of faculty who will be tasked with reviewing how the campus has handled academic affairs over the course of the pandemic, Walker said. The group will determine what aspects will be implemented as a long-term strategy once face-to-face instruction resumes.

Walker plans on further collaboration with the senate to continue the discussion surrounding student success.

“We really need some interaction with you all to help us make a robust plan.”

Walker encouraged students to review CSUN’s policies and procedures to refer to the current grading system in place.

The University Affairs Committee is the standing committee for the AS Senate and is responsible for investigating and recommending courses of action to the AS Senate on matters regarding academic and university issues.

The second motion out of the committee was to approve the AS LEAD Program code, which passed.

The LEAD Program is a mentor and leadership training program for incoming freshmen and transfer students. Through the program, AS Senators and cabinet members serve as mentors.

The senate also approved the appointment of Juan “JC” Martinez, art education major, as an upper-division AS senator.

Martinez has worked in various campus divisions, including the EOP program and New Student Orientation in the Office of Student Involvement and Development.

According to Martinez’s biography, he wants to use his prior experience supporting the student body to advocate for all students, specifically first-generation students who are currently enrolled in upper-division statuses.

The senate also approved the appointments of psychology major Paige Hajiloo and kinesiology major Raymond Sadeghi as members of the Clubs and Organizations Committee.

Attorney General Jacob Akopnik announced that Isabella Rizzo, senator for Education, will be leaving AS to pursue another job position that would conflict with her responsibilities with AS. Monday was her last meeting as a senator.