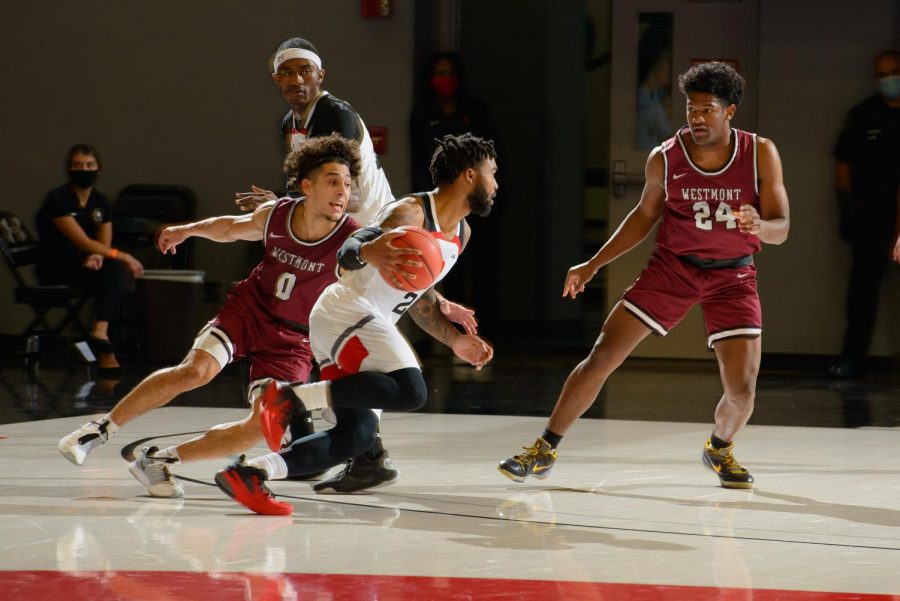 TJ Starks, a transfer from Texas A&M, made his CSUN debut after sitting out last season due to NCAA transfer rules.

The squeaking of sneakers, yelling from coaches and players, and fake crowd noise filled the Matadome for the men’s basketball season opener on Wednesday. It was a far cry from the near-capacity crowd at the last CSUN home game seven months ago.

To say it’s been a long offseason for men’s basketball would be an understatement.

Gone are the high-flying athleticism of Lamine Diane and the grit of Terrell Gomez. This year’s team has several new faces, but you wouldn’t know that from Wednesday’s season opener as the Matadors steamrolled over the Westmont Warriors, an NAIA school, 97-79.

“This is a very interesting year to say the least,” said head coach Mark Gottfried. “It’s just nice for [the players] that they’re in the gym, they’re playing. Hopefully we can stay COVID-free and stay healthy, that’s the most important thing.”

Forward Lance Coleman II, the team’s lone senior, set a new career scoring high of 22 points in just the first half on 47% shooting with four three-pointers made.

It was a moment of redemption for Coleman, who averaged just 7.4 points per game a season ago.

“I definitely took a lot of time during this quarantine to get my body in shape so I could be able to help my team the best that I can,” Coleman said. “I could tell that my teammates respect the work that I put in this summer.”

Despite a slow start, the Matadors took the lead seven minutes into the game off a bucket from redshirt junior guard TJ Starks and never looked back. Coleman carried the load offensively in the first half as the only Matador scoring in double figures.

Freshman forward Alex Merkviladze took over in the second half as he scored 14 points and grabbed eight rebounds in the half to cap off a 20-point, 12-rebound double-double in his Matador debut.

The Matadors dominated the Warriors in just about every facet of the game from shooting percentage (47% for CSUN compared to Westmont’s 41%) to assists (26 compared to 14). CSUN’s bench outscored Westmont 31 to 14 off solid performances from veterans Ron Artest III (6 points, 10 rebounds, 3 assists) and Brendan Harrick (5 points) as well as freshmen Fidelis Okereke (7 points, 5 rebounds), Amound Anderson (6 points, 2 rebounds), and Atin Wright (7 points, 2 assists).

The Matadors will participate in this weekend’s Las Vegas Bubble tournament, where they are scheduled to face Air Force and Seattle University. They will return to the Matadome on Dec. 16 to play against the University of the Pacific.

“We’re going to get two wins,” Coleman said about the Vegas Bubble. “It’s a business trip.”