Activists protest against Garcetti as potential candidate for Biden’s Cabinet 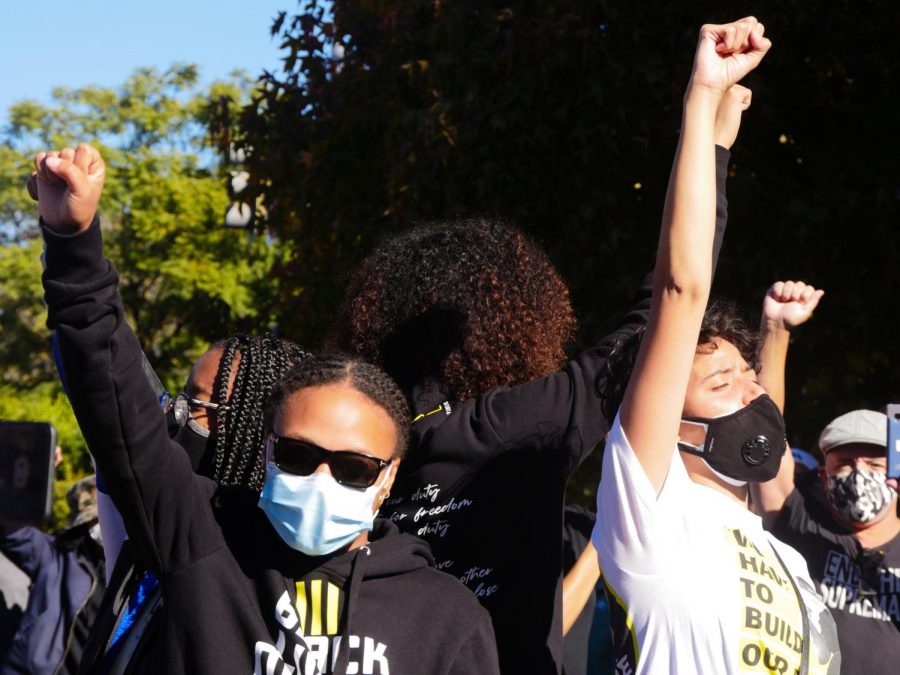 Young Black Lives Matter Los Angeles members chant at the center of a group circle that ends every protest.

A few dozen activists joined the Los Angeles chapter of Black Lives Matter on Nov. 23 and marched up Irving Street in Hancock Park to the residence of Mayor Eric Garcetti. The banging of pots and pans and chants from the crowd filled the usually quiet morning air.

The protest has been dubbed the #BlockGarcetti protest by BLM Los Angeles, and has been a daily occurrence since Nov. 23.

At the third protest on Thanksgiving, LAPD declared an unlawful assembly soon after the protesters arrived, and detained two people for failing to disperse. Activists have returned every day since.

The protest grew out of rumors that Mayor Garcetti could be selected for President-elect Joe Biden’s cabinet, possibly to head the Department of Housing and Urban Development or the Department of Transportation.

Garcetti served as co-chair of the Biden-Harris campaign. The rumors of his appointment to Biden’s cabinet have been noted in several publications, but the mayor has denied that he will take such a position.

In a statement, Mayor Garcetti acknowledged the protests.

“I will always support people’s right to make their voices heard peacefully and keep listening to what they have to say,” Garcetti said. “Angelenos are hurting badly right now, and I see that pain every day. Too many lives have been lost, but I know that our collective efforts have saved so many more. That work, more than anything else, is my guiding light right now.”

Activists with People’s City Council L.A. and BLM-L.A. said that Garcetti’s track record as mayor didn’t prove his ability to make change in housing and transportation.

“Everything in Garcetti’s life has been to pursue higher office, to build on his legacy, to have his name in the papers,” said Ricci Sergienko, an organizer with People’s City Council. “It’s bizarre that he would be considered for housing secretary, because there’s a housing crisis in Los Angeles.”

The 2020 Los Angeles Greater Homeless Count found that 66,436 people in L.A. suffer from homelessness, a 12.7% increase from 2019. COVID-19 has pushed homelessness to the forefront of social issues as shelters reach their limits and the city struggles to keep unhoused residents safe from the pandemic.

BLM-L.A. also believes that Mayor Garcetti’s relationship with police and his unwillingness to compromise with activist groups makes him an unfit pick for a national position. The death of George Floyd earlier in 2020 prompted nationwide protests, including in Los Angeles, where thousands of people protested at Garcetti’s home. Calls grew to decrease funding to the LAPD, which has a budget of nearly $3 billion.

Earlier this year, Garcetti mentioned, but did not agree to, the People’s Budget of L.A., a proposal to slash the LAPD budget by 90%.

BLM-L.A. has been outspoken in their disdain for Mayor Garcetti for several years. They have publicly demanded that police forces like the LAPD are replaced with nonviolent community members.

Melina Abdullah, co-founder of the Los Angeles chapter of Black Lives Matter and a professor of Pan-African Studies at Cal State L.A., said that Garcetti’s policies did not bode well for a national government position.

“Garcetti has been an absolutely terrible mayor,” Abdullah said. “He’s probably had the worst track record of any mayor in the country in terms of how he’s engaged with this movement for Black lives. From the very beginning, he’s been adversarial, he’s been hypocritical, and he’s enacted policies that were murderous.”

Aside from the two detainments made early on, the LAPD officers at the #BlockGarcetti protests have mostly monitored the activity and enforced city ordinances that protesters must keep moving, stay 100 feet away from the residence, and refrain from using artificial noise makers like pots and pans.

As progressive activists challenge Garcetti, conservative protesters on the opposite end of the spectrum are also unsatisfied with his leadership.

Supporters of President Trump have also been protesting outside of Garcett’s residence on and off for several days, chanting “end the lockdown” and claiming that being asked to wear a mask is an infringement on their freedoms. They have also protested in Santa Monica, Orange County, and several other locations throughout the southland.

They wrapped up. They say they’ll be here every Saturday at 8 and they’ll be at Dr. Ferrer’s house tomorrow. I’m headed home. pic.twitter.com/F5ienc7b5I

Although the speeches and the chanting at the #BlockGarcetti protests are often filled with smiles and laughter, the protesters who gathered at Garcetti’s have said they mean business.

Sergienko said the protests will continue until they are sure that Garcetti will not be in Biden’s cabinet.

“We’re going to be out there until either we know Joe Biden won’t be appointing him, or someone else is appointed,” Sergienko said.

Abdullah said that regardless of who is in Biden’s cabinet, BLM has demands for the entire administration.

“The number one demand is a meeting,” Abdullah said. “We issued an open letter, we made requests to meet with both Biden and Harris, and we haven’t had that meeting confirmed yet. That’s our number one priority.”