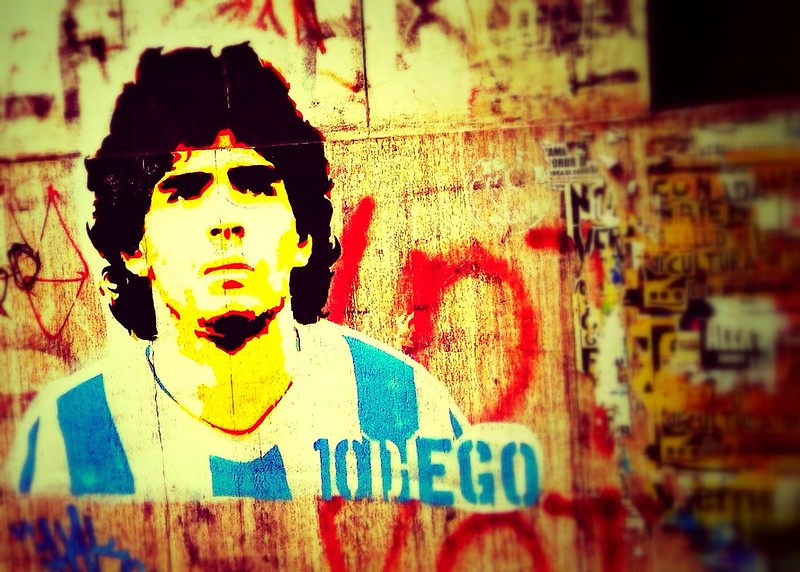 The great Maradonna died at 60 years old from a heart attack.

The soccer world mourned together when they heard the news of the passing of Diego Maradona on Nov. 25. The soccer legend from Argentina is objectively seen as one of the most skilled people to ever play the sport, and considered among many as one of the greatest soccer players who ever lived. His influence was felt by people all over the soccer world, including CSUN soccer players.

“My father was a big Maradona fan and his love for Maradona’s playing style soon became one of my favorites,” said redshirt sophomore forward Marvin Arias. “We’d stay up every weekend watching his highlights on this [DVD] we bought from the swapmeet over and over again.”

Maradona’s playing career lasted over 20 years and was filled with countless accolades and unforgettable moments.

“I would go on YouTube and look at his highlights, skills and goals,” Gio Aguilar, a senior midfielder, said. “He was always someone I thought was just born with the natural instinct and elegance to play football like no one lese in his era.”

Perhaps what Maradona will be remembered for most was his run in the 1986 FIFA World Cup. In the quarterfinal match against England, Maradona scored his two most memorable goals.

“A lot of people always say their most significant moment in the memory of Maradona was the ‘Hand of God,’ but I remember the “Goal of the Century,”” Arias said. “That goal showed me how ahead of his time he was.”

In the “Hand of God” goal, Maradona sneaked past England defenders and scored a goal using his hand. He was so stealthy that none of the referees had noticed that his hand was used.

The “Goal of the Century” took place only four minutes later as he zipped past five defenders, including the goalie, to score an incredible goal while falling down.

Maradona would go on to lead the Argentina national team past England and would ultimately defeat West Germany 3-2 to win the World Cup.

“Growing up I was a huge Maradona fan, especially so since half my family is Argentine,” said John Andersen, another senior midfielder. “Watching his clips never gets old because what he could do with the ball is nearly indescribable.”

Maradona still had his vices. A well-documented history of drug abuse led to his suspensions in 1991 and 1994, mainly due to cocaine consumption. They have also been cited as reasons for his health problems later in life.

In the last 20 years, Maradona had to spend many nights in the hospital battling issues like hepatitis, hernias and internal bleeding. His drug and alcohol abuse eventually led him to obesity in his post-playing life. Three weeks before his death, Maradona underwent brain surgery to treat a subdural hematoma.

Although the younger generation did not witness his greatness as it happened, his influence on soccer is undeniable.

“Maradona left the soccer universe on the pedestal of what a true winner consists of,” said Arias. “A captain, a hero, an example. His moments of passion still lives on with us today.”

Lionel Messi, who is also an Argentinian, is arguably the best soccer player in the world right now. Maradona was not only his country’s hero, but Messi’s as well. Maradona himself referred to Messi as the “New Maradona.”

Messi honored Maradona’s passing by scoring a goal that resembled the style of the late legend.

Maradona’s influence is felt far beyond the professionals, as players ranging from youth to college players try to replicate the moves that he made famous.

“His ability to always stay balanced and use his body in just the right way to keep the ball from defenders is something I’ve always tried to copy but have not come even close to being able to do,” Andersen said. “But at least it is something I can strive for.”

In December 2000, Maradona was named one of the two FIFA players of the century, along with Brazilian icon Pelé, on a fan internet poll. However, the poll showed that Maradona received 53.60% of the vote while Pelé only received 18.53%. In the eyes of the fans, it was clear who the most fascinating and influential player was.

“His influence on the game went far beyond just soccer. When he represented Argentina, he played for all the kids who grew up with very little and showed them that anyone can make it,” said Andersen. “He used his greatness to show the less fortunate of the world that they too can achieve anything.”