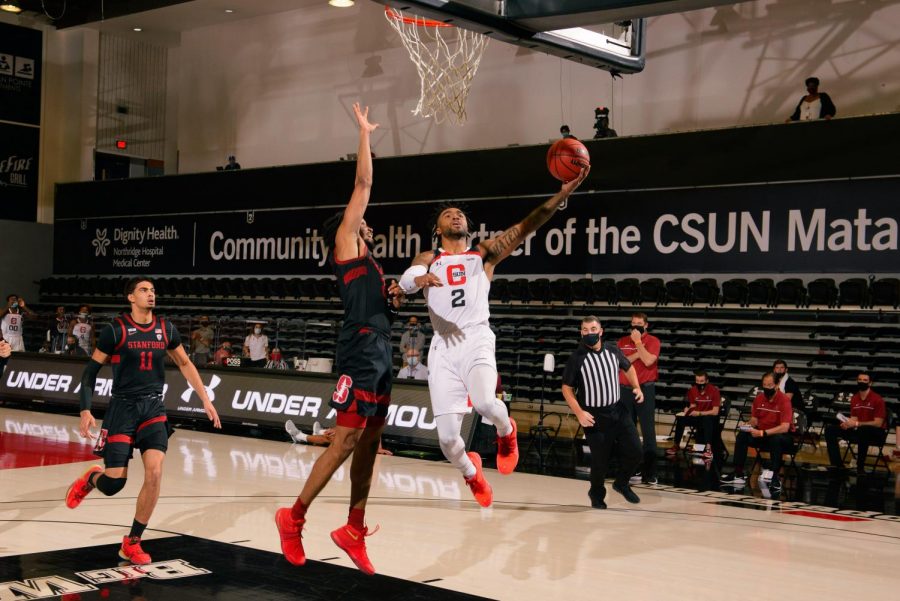 In their historic first meeting, CSUN men’s basketball and Stanford competed in a defensive game where Stanford had the edge and came out on top 82-71. Although CSUN was able to close down on Stanford’s lead a few times, they came up short.

Their matchup marked the first time a Pac-12 team played at the Matadome since the Matadors played Berkeley in 1995.

The game began with a slow start offensively, but CSUN quickly found themselves down 10-2
while shooting 0-5 from the three-point line and 0-7 overall after making their first basket.

“I thought that they had a lot to do with how we played offensively,” said head coach Mark Gottfried. “Their length bothered us and they played great defense. We also didn’t play our best game today and missed a lot of open shots that could have helped us.”

The Matadors responded with a 10-6 run, making the score 16-12 after the second timeout of the game.

Steals and offensive rebounds in the latter minutes of the first half allowed the Matadors to take control of the tempo of the game, giving them plenty of chances to score.

The Matadors then went on a 12-9 run to take the first lead of the game at 24-23 powered by an energizing three-pointer from Lance Coleman II in the final minutes of the first half.

Despite shooting 12-for-37 at halftime, the Matadors took advantage of their defense while netting 13 turnovers to Stanford’s six at the half. These crucial turnovers allowed them to outshoot the Cardinal drastically and make up for a struggling night at the field.

Second chance points from offensive rebounds gave the Matadors an edge of 9-3 with 15 points to Stanford’s two.

Big West Player of the Week TJ Starks led the team with 13 points at the half, shooting 3-3 behind the arc and 5-11 from the field, chipping away at the deficit to make it 36-33 at halftime. He finished with a complete performance of 19 points, 5 rebounds, 4 assists and 5 steals.

“It kinda did motivate me, I try not to look at awards because my mom always told me to come into the game the same way as if I didn’t win an award,” said Starks, a redshirt junior guard.

The hot hands of Lance Coleman II in the second half evened the score at 48 with 14 minutes left to go on another crucial three-pointer.

The Matadors offense and defense struggled to keep up with the Cardinal in the second half, falling behind due to turnovers and fouls.
The Matadors trailed 61-51 with nine minutes left in the second half. A run started from a steal by Starks led to a 6-0 run by the Matadors, bringing the margin down to just four points. But Stanford went on to widen the gap with five points of their own.

CSUN often trailed by double-digit margins in the second half, making attempts to close the margin however they came up short, losing to the Cardinal 82-71.

The Matadors will take a small break from the action as their game against University of the Pacific was postponed to Dec. 22. They will play Cal on the road on Dec. 19.