Op-Ed: The Ride That Made History 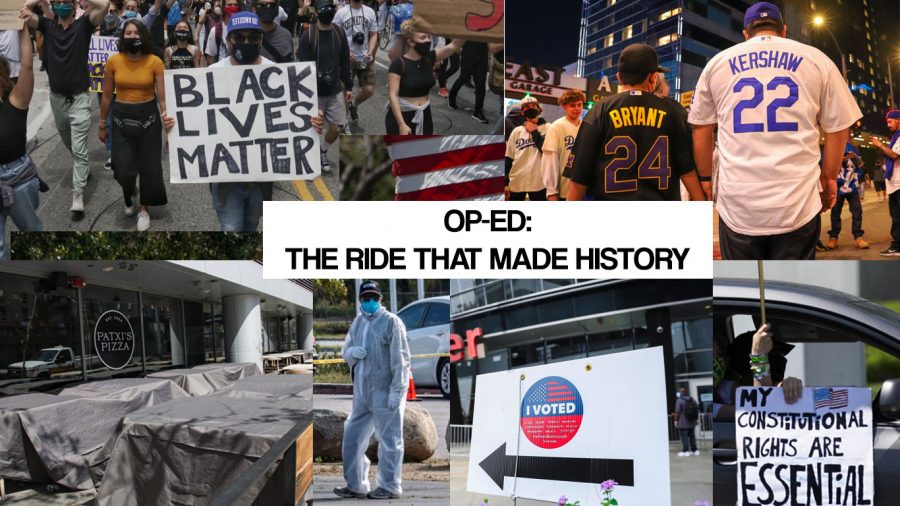 As there is just 14 days until the new year, 2020 will be remembered for many reasons.

Take a deep breath. Be relieved this rollercoaster ride is almost over.

We just survived what may be the most wildest year of our generation: 2020. We already knew that it was going to be another election year, but we didn’t expect what would accompany it. A pandemic, protests, lawsuits and murder hornets came along.

Many history books will be written about this tumultuous year. Historians might place 2020 in the ranks of pivotal years in American history such as 1860 or 1968. In case you forgot what went down, buckle up, and come with me for another ride through what happened in our nation this year. Yes, I’ve been on this ride before.
You can say that 2020 disrupted our plans for the year since March, when COVID-19 made the world stand still. You could even argue that 2020 began not on Jan. 1, but on March 11 — the day COVID-19 was declared a pandemic, travel bans from Europe were announced, the NBA season was suspended, schools and campuses across the nation announced switching to online learning and Tom Hanks testing positive.
The face mask joined the ranks of shirts and shoes within days. Birthdays and graduations had to be scaled down. Classes, meetings and casual hangouts were on a teleconferencing app called Zoom. Six feet apart became the norm. Toilet paper became the hottest item in the market. Doctors and nurses became our soldiers.

Donald Trump, who just survived impeachment, politicized the pandemic, while using his position of influence to downplay the severity of COVID-19 and declaring war on Dr. Anthony Fauci, director of the National Institute of Allergies and Infectious Diseases. States run by Democratic and Republican governors enacted stay-at-home orders in hopes to slow its spread. But there were people who would refuse to wear a mask, thinking that COVID-19 is “just a flu” or that a mask violates your freedom of expression or your freedom to breathe.

And in comes COVID-19 confusion coming from the White House to cable news. Trump and his allies began calling the disease racist names, while some Republican-led states undercounted the number of cases and deaths (I’m looking at you, Florida). It was ugly on social media, where there was denial of the disease’s existence to conspiracy theories claiming that its spread was destined for the United States, and they were even picked up by politicians. Given the power of the Internet, not even my mom knows who to trust for COVID-19 news.
As the pandemic worsened, the economy began to slide. Small businesses began losing profits and had to go out of business. Restaurants switched to take-out only. We now consider people working at supermarkets and restaurants, delivering the mail and bus drivers as essential as they risk their lives toward helping Americans survive through the pandemic.

And then there were people who took to the streets supporting calls to “liberate Michigan” and demanding businesses to reopen, leading to protests outside administrative offices and a plot to kidnap the governor of Michigan. Even the lieutenant governor of Texas said that he would rather die before seeing the economy crash.

The pandemic revealed long-existing inequalities that the United States has not still confronted, as Black and Latinx people were getting infected more due to a lack of quality healthcare, often based on where they lived or where they worked.

Word from Kentucky and Georgia about Black people being shot and killed by the police outraged the nation, but it wouldn’t be until the killing of George Floyd in Minnesota that would ignite another “long, hot summer” that witnessed what became the largest movement in recent American history: a re-energized Black Lives Matter movement.

Americans reflected on how racism has been embedded in American society for centuries. Protests and riots spread coast to coast. People began to understand why Colin Kaepernick took a stand that cost his career. Not even the President holding a Bible helped, even if it meant using force against protesters. Communities may have already had rocky relationships with the police beforehand, but more people began to lose trust in them to the point where they petitioned city officials to withdraw funding, with the choice of words igniting debate and controversy that continues today.
As the holidays were approaching, the nightmare continued. House parties, underground parties and demands to open houses of worship made the news as the number of COVID-19 cases and deaths in the nation began to rise. The race for a vaccine was on, with Trump pushing for them to be ready before the election. Oh, and Trump’s gatherings and rallies with no social distancing may have set off an outbreak inside the White House. The man who most people would look up to, who had denied its danger for months, brought it to his circle and himself.

But a couple of days before Trump tested positive came the worst presidential debate in history. Democratic challenger Joe Biden had to confront Trump who deflected questions on the pandemic and racial justice. After that bonanza, the second show got canceled as both candidates held dueling town halls on TV taking place at the same time. Eventually the third show went on as scheduled, this time with the sound guy having more control of the microphones.

At least we had respite as sports resumed play, whether with limited capacity or in bubbles with no fans in the stands. It may not be fun for an athlete to play before an empty stadium, but it is not fun being a team playing a game where all your quarterbacks had to sit out because they tested positive. Here in Los Angeles, one crew made a departed legend proud while another crew ended a 32-year drought.

Whether it would be by mail or in person, we witnessed the highest voter turnout since the early 20th century. But then others created doubts over voting by mail, assuming that they were more prone to voter fraud, to the point where the new postmaster’s plans to shake up the USPS drew controversy. Social media was preparing for an onslaught of election misinformation, with Twitter flagging Trump’s tweets, while Instagram paused updating new posts from hashtag pages. Was Facebook missing in action?

On Election Night, we had no winner because a majority of Americans voted by mail. Four days of worry followed, where we constantly updated our Internet browsers, boarded up stores, preparing for what to do if violence breaks out and nail biting.

On the morning of Nov. 7, instead of violence, there were cars honking, people cheering and street parties. The show was over. The largest electoral turnout since 1908 resulted in Joe Biden becoming the 46th President of the United States and Kamala Harris becoming the first female Vice President. We witnessed the power of the Black, Indigenous, people of color, female, LGBTQ, youth, suburban and an intersection of any of the above votes.

And we’re now seeing the wildest election epilogue since 2000. Lawyers and Trump loyalists claimed that the election wasn’t fair, when the facts say that Biden won the election. A month of tweets, rants and hearings full of falsehoods in hopes to overturn the election fired up a base who doubted election integrity before the election (while also flocking to some platform called Parler).

What was supposed to be a peaceful transfer of power became an attempted coup d’etat as Texas — with the support of President Trump, 17 Republican state attorney generals and 126 House Republicans — went up to the Supreme Court because they were upset with four states’ election results in favor of Joe Biden. And it backfired within days. When will the show be over now that the Electoral College had sealed the deal at the time of this writing?

After more than 300,000 Americans are now gone since March, the vaccine is now on it’s way. But Christmas, Hanukkah, whatever you celebrate, will be strange this year. People might be brave to storm the mall at their own risk. Kids are writing letters to Santa wishing that the hardships caused by the pandemic would be over. You may not have the people you love in person with you this year, but know that they’re still with you in your heart.

The beginning of 2021 will be rocky as COVID-19 will not go away. Joe Biden will take the oath of office in January. Politics will be as toxic as ever and I’m not sure if the United States will be the same. Americans are now unsure where to get their news from, especially with disinformation flourishing on social media about both the pandemic and the election. And we’re waiting for a chance to hug someone again.
If we were to learn anything from this ride called 2020, we should pay attention to politics more as it decides our future. You could say that a typical American became more invested in politics once Trump took office in 2017. It would be being careful with where we get our news from, on TV or on the web. Not everything you hear may be true.

As this year wraps up, I’m sure nobody would not want to ride it again. Maybe 2021 will be more enjoyable and not as intense as 2020 was. I wonder how many people had already bought 2021 calendars beforehand.

If anyone asks you what was the scariest ride you’ve been on, put on your “I Survived 2020” face mask and wear it as a badge of honor.