Review: “The Queen’s Gambit” keeps you hooked with their winning moves 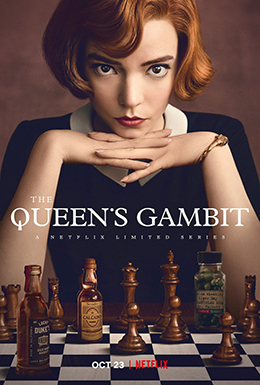 As a general sports lover, the dramatized sound of a swishing net, cracking bat, or smacking shoulder pads runs in my DNA. Thanks to Netflix’s “The Queen’s Gambit,” the sound of a king confidently coming down on a chess board can now be added to that auditory list. And yes, I consider this series about chess to be a sports show — a damn fine one at that.

Like all noteworthy sports stories, “Queen’s Gambit” is as much about everything that surrounds the big games as the game itself. Gripping match sequences feel empty without multidimensional characters performing in them. Creators Scott Frank and Allan Scott give us no shortage of layered character development and well-directed scenes that keep you leaning forward even when you know little about the inner workings of the game being played.

“The Queen’s Gambit,” set in the 1960s, follows orphan Beth Harmon’s (Anya Taylor-Joy) ascent from a student in a Kentucky girls school to world class chess champion. Shortly after being placed in the orphanage as a result of her mother’s suicide, Beth sees the school janitor, Mr. Shaibel (Bill Camp) playing chess in the school basement. She’s immediately drawn in by the board and pieces and in her precocious manner, begins to pepper Mr. Shaibel with questions about the game. In one of several endearing relationships on the show, Shaibel takes her under her wing only to quickly discover that he’s way out of his league with this young prodigy.

Beth goes on to get adopted by a local family in Lexington but soon after, her new father takes off, leaving Beth and her new mother to look out for themselves. It is at this point in the show where the narrative begins to take subtle, unexpected turns not unlike Beth’s chess playing style.

The show is a buffet of visual delight on many levels. This is surely Emmy bait for the captivating performance that Taylor-Joy delivers, as well as for the set design and costume department. The same way those latter elements were in their full 1960s glory in “Mad Men,” from dresses Beth adorns to her house in Kentucky and the boldly designed hotels that host the chess tournaments, they’re even more grandiose in this rendering of the decade.

It’s impossible to make a show set in the ’60s and be neutral or silent toward the cultural implications of the time. Being a seven-episode limited series, however, this felt like a practice of constraint in not chasing all the rabbits of the day.

It plants its flag in the gender struggle as Beth comes to dominate a game rarely played by women. Even then, the revolutionary aspect of a woman toppling the chess world is so seamlessly woven into the different stories happening concurrently that it never rests solely on this alone. There are suffocating addictions to overcome, an existential reckoning of her past and a well of loss that fills the space between the tournaments — all of that kept this chess blockhead clicking “next episode” over the last week.