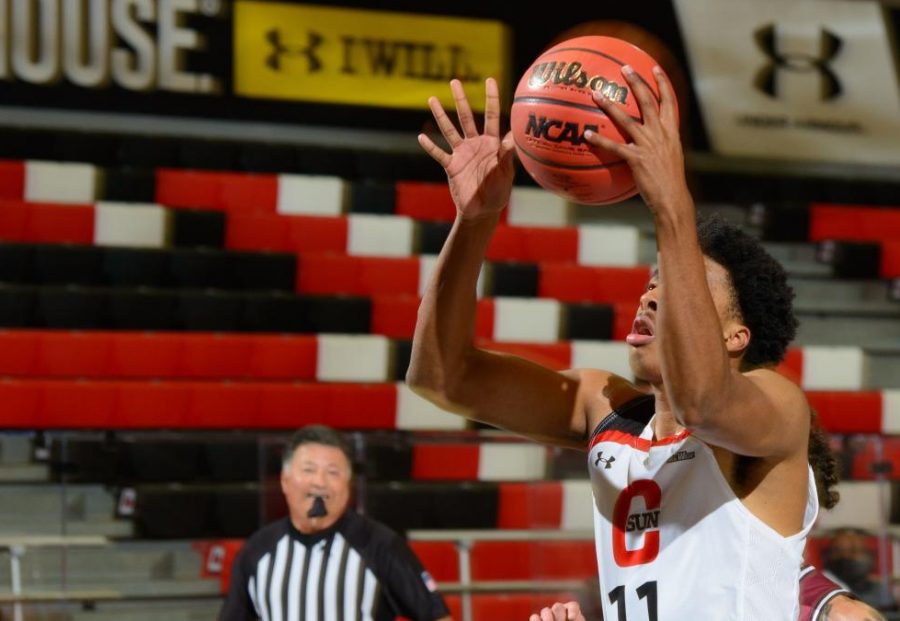 Closing in on the final seconds, CSUN secured the win on Monday night putting their 2020-2021 overall record at 4-3.

Down by 12 points with six minutes to go, the Matadors needed an offensive run to have any chance of beating New Mexico State. They scored 15 of the next 20 points, and suddenly found themselves trailing by one with 30 seconds to go.

Although first year transfer TJ Starks led the game in scoring, he was 0-8 from 3-point range up to this point, including two misses in the last three minutes. However, his confidence never subsided and his sole 3-pointer of the night won the Matadors the game.

“When your number is called you have to step up and make a play,” said Starks. “I came off the screen and shot it with confidence. You can’t let missed shots affect your game, no matter how frustrated you are.”

CSUN defeated New Mexico State 66-63 in a back-and-forth contest after trailing for 35 minutes of the 40-minute game.

They started this game up 5-1. Once New Mexico State tied it at 5-5 four minutes into the game, the Matadors did not have the lead again until the last 20 seconds of the game.

“It was a game that, to be honest, I think we struggled with for the most of it,” said CSUN basketball head coach Mark Gottfried. “Late in the game we really stepped up and did a lot of things well. I was very proud that our players never quit and kept on fighting.”

This game was also important for the Matadors in other facets, as it was the teams’ first home game since the passing of longtime CSUN men’s basketball coach Pete Cassidy. His 335 career victories over his 25-year run as head coach for the Matadors are the most wins ever recorded in school history.

A moment of silence was held in Cassidy’s honor before the start of the game.

This game against New Mexico State was only announced a little over 24 hours beforehand. There has been a lot of shifting of CSUN’s non-conference schedule due to postponements and cancellations of games due to COVID-19. A total of five games have been canceled or postponed for the Matadors so far.

“Sometimes we don’t get to play, so when we do we should be excited,” Gottfried said. “We didn’t have much time to play and our guys did a good job. We just gotta keep seeing how the season will play out.”

“Coming out we didn’t play as hard we should have played, but we did stay together and figured it out,” Starks said. “In between timeouts we talked to each other and gave each other encouragement to build each other up.”

The offensive high point for the Matadors in the first half was the performance of freshman forward Alex Merkviladze, who scored 11 points including nine points from 3-pointers.

Junior guard Darius Brown II was vital to keeping the Matadors in the game. Brown was on the floor for 37 minutes. His tenacity was evident in the box score, where he led the Matadors in rebounds with a total of nine, five above his average.

Starks had a quiet first half but had an impactful second half, where he scored 14 of his 18 points. For the first seven minutes of the second half, Starks was the only Matador to score.

New Mexico State was in control for most of this game. CSUN would go on runs but the lead was always somewhere around six or eight points in favor of the Aggies.

The Matadors’ game-winning run was led by Starks, Brown and junior guard Vante Hendrix. The trio combined to score 19 points over the final six minutes of the game. That was enough to bring the Matadors back from a double-digit deficit late in the game.

“It’s not a good statistic to never have the lead,” Starks said. “We made the adjustments we needed to make and pushed through for the win.”

The Matadors’ defense during this stretch was vital as well. Junior forward Miles Brookins and sophomore forward Festus Ndumanya made their presence felt in the paint, putting pressure on anyone trying to score under the basket. Brookins ended up finishing the game with two blocks and seven rebounds, while Ndumanya recorded one block and six rebounds. The Matador defense only gave up 14 points in total in the second half.

“Hopefully this is something we can build from for the future,” Gottfried said. “Great confidence builder for us going into the Big West conference games.”

Starks led the game in points for the Matadors with a total of 18. Brown and Hendrix weren’t far behind with 12 and 11 points respectively. Starks and Brown also each added four assists to their statline, showing they were able to get other teammates involved as well.

The Matadors’ next two games will be a back-to-back against conference rival UC Irvine. CSUN and UCI were the top two teams in the Big West last season, with many predicting that they would have faced off in the Big West tournament finals had it not been canceled.

“Irvine is a well-coached team with a lot of good players,” Starks said. “We gotta come out with some fire ready to play both on the offensive and defensive end.”

Irvine opened the season as the number one ranked Big West team in the media poll. Irvine currently holds an overall record of 5-4 and is undefeated in conference play at 2-0.

“We beat Irvine last year … I think that gave our players a lot of confidence,” said Gottfried. “We are very familiar with them, we know how they are gonna play.”