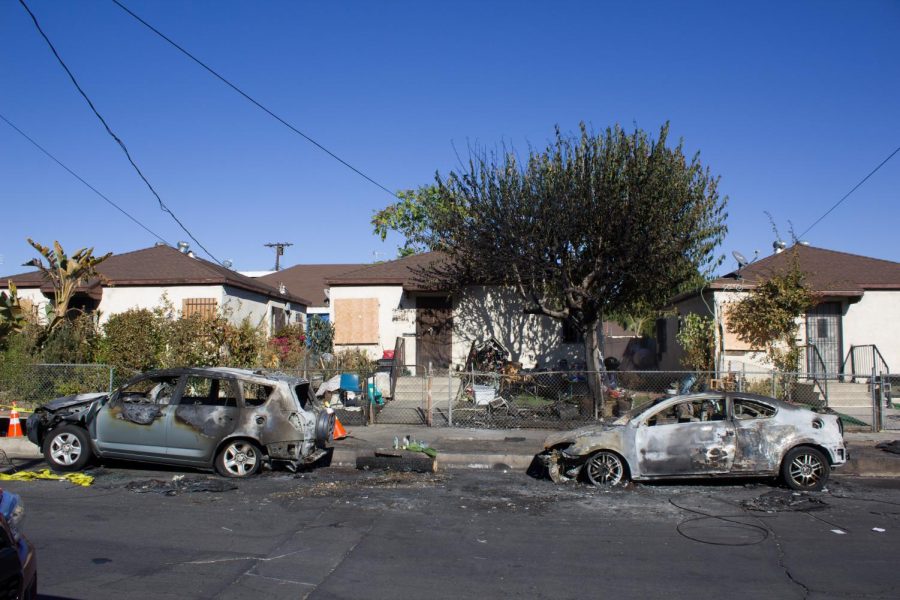 Two scorched cars are seen in front of residential homes after a single-engine plane crash near Whiteman Airport in Pacoima, Cali., on Thursday, Nov. 12, 2020. Neighbors pass by the cars days after the accident that left the pilot dead.

Eva Avalos-Benitez ran and fell away from the flames that threatened her home as she and her grandson escaped through the back with the help of their neighbors, her hair and sweater covered with debris. She thanked God she’s still alive ­­— she had survived a plane that crashed in front of her home in Pacoima.

Other residents and community leaders alongside Avalos-Benitez spoke at the crash site. The news conference was organized by the Youth United Towards Environmental Protection, a Pacoima Beautiful program, on Nov. 21, where residents voiced their concerns about their neighbor, the Whiteman Airport.

Whiteman Airport, which sits on the outskirts of Pacoima, is one of two municipal airports in the San Fernando Valley. The local community called for the closure of Whiteman after a small, single-engine plane crashed in front of nearby homes on Nov. 12, leaving three cars scorched, a dead pilot and a terrified community.

“Today’s accident is a reminder of the public safety threat that Whiteman Airport has long posed to the community of Pacoima, a community that derives no value from its operation, but is subject to all the negative impact,” Rodriguez said in a statement on Nov. 21.

The Los Angeles County Board of Supervisors approved a motion on Dec. 8, calling for a “master plan” that would keep the airport, but include goals to create local jobs, opportunities and benefits to the community, according to the Daily News.

The motion called for environmental studies on the airport’s risks, a panel made up of Pacoima residents to give advice on airport operations and the creation of an emergency response protocol for accidents on and off airport property. This protocol would also include reimbursement for damages and mental health counseling.

Margarita Garcia, Avalos-Benitez’s neighbor, said her family that was home during the crash remain traumatized when they hear an airplane above their home.

“When my older son called me he told me, scared, almost crying, ‘Mom, something happened here, we have to leave,’” Garcia said. A few seconds later an aircraft was heard above, interrupting her speech.

Garcia was at the San Fernando Swap Meet, about three miles away from home, when she received her son’s phone call. She quickly made her way home to find her three children — who prior to the crash were on their computers for their virtual classes — standing outside amid the chaos outside of their home.

Other residents such as Dolora Reyes, have started to oppose the airport. Growing up, Reyes watched airplanes in the sky, taking off and touching down at the Whiteman Airport with excitement, however she realized she didn’t know anybody in her neighborhood who owned or used the airport.

Reyes recently realized that the airport serves little benefit to Pacoima. Instead, the airport sacrifices the community’s air quality and general safety of the residents, she said at the event.

The residents and local community leaders argue that the airport doesn’t serve the community and would like to see it shut down.

“It will take all of us working together to reimagine a better use for Whiteman Airport and transform it into an asset which the Pacoima community can truly stand to benefit from,” said Veronica Padilla, the executive director at Pacoima Beautiful, in a statement she shared on Instagram.

In Padilla’s statement, she called the Los Angeles County Board of Supervisor, Sheila Kuehl to revisit the lease on Whiteman Airport. Kuehl’s district oversees the airport, which was purchased by the County in 1970 and is operated by a private management company under an agreement with the County.

“My office is looking forward to working with County departments, as well as Councilwoman Rodriguez’s office and members of the community to rethink Whiteman Airport and build out amenities that will provide benefits to the community as a whole,” Kuehl said in an email statement to the Daily Sundial.

Pacoima Beautiful issued a press release on Nov. 18 stating that they’ve called for the closure of Whiteman since 2007 when it issued a report stating, “Whiteman Airport is the largest identified toxic source emitter in Pacoima. It emits toxics almost 20 times higher for carcinogenicity, 70 times higher for chronic non-cancer, and almost 80 times higher for acute non-cancer that is the highest source emitter in the area.” They estimate that as much as 1,000 pounds per year of various toxins may be emitted due to ongoing operations at the airport.

The Daily Sundial reached out to Padilla and Pacoima Beautiful for an interview but have yet to receive a response.

Whiteman Airport was founded in 1946 and is known as a reliever airport, an airport that provides general aviation access to the surrounding area and also provides access to emergency services.

Whiteman Airport employs about 246 personnel, creates roughly 412 jobs and brings in nearly $19 million in labor income annually, according to the L.A. Department of Public Works.

The Whiteman Airport manager James Miller, rejected to comment on the accident and the airport’s status in the community.

“I would be surprised if any more than a few people from San Fernando, Pacoima, Arleta, actually have a plane there,” Graves said.

According to 2018 census data, 86% of the population in Pacoima are Hispanic and the median household income is about $60,000. The census data also states that 17.5% persons in Pacoima live below the poverty line, about 25% higher than the rate in California.

While it’s possible for a Pacoima resident to own a plane, it’s highly unlikely.

A Cessna 182T, the same model plane that crashed in Pacoima, can cost up to $480,000, according to Controller.

In 1957, a plane collision crash killed seven people — two pilots and two crew members, three children — and injured about 75 other students at Pacoima Junior High School, now Pacoima Middle School, during a graduation ceremony where 800 children were in attendance, according to the New York Times and the Aviation Safety Network database.

In 2018, a Cessna 150L two seater airplane, crashed into the overhang of a building at Whiteman Airport just 500 feet adjacent to the end of the runway, killing the flight instructor, 60, and injuring the passenger, 12.

The airplane was in the air for less than a minute before the instructor communicated to the tower controller that they needed to turn back. A loss of engine power due to fuel exhaustion and the angle of the abrupt turn resulted in an aerodynamic spin. An inadequate preflight inspection was a contributing factor in the accident according to the report.

Although this crash did not directly impact the residents of Pacoima, the danger of living near an airport is constant.

David Rodriguez, a Pacoima Beautiful staff member, sympathized with the residents who live near the airport, stating that they have to deal with the emissions coming from the aircrafts and factories that neighbor the residential area.

“Two hundred feet away from this community is a train track that constantly goes throughout the night,” Rodriguez said. “This community gets no rest.”

Andres Ramirez, the policy director at Pacoima Beautiful, said, “We challenge Sheila Kuehl and the Board of Supervisors to rethink what this county land can be used for.”

Ramirez said his community holds the health and economical burden of places like Whiteman.

According to AccuWeather, the air quality is ranked in the “good” category with a Air Quality Index (AQI) score of 34.

The good category ranges from zero to 50 and is considered acceptable, however, unusually sensitive people should consider limiting prolonged outdoor exertion, according to Air Now.

The Santa Monica Municipal airport and the Bob Hope Airport in Burbank have an AQI of 36 and the Van Nuys Airport, a 32. This means that the airports in the San Fernando Valley and surrounding areas still have good air quality, but it doesn’t take away the risks an airport close to a residential area has on its community.

Some Pacoima residents have been traumatized by the Whiteman Airport since the plane collision over Pacoima Junior High in 1957. The community calls for the redevelopment of the airport and awaits the motion by the Board of Supervisors to receive the protection and community goals.

The crash is currently under investigation by the National Transportation Safety Board.

Eva Avalos-Benitez’ and Margarita Garcia’s speech at the event was translated from Spanish to English.