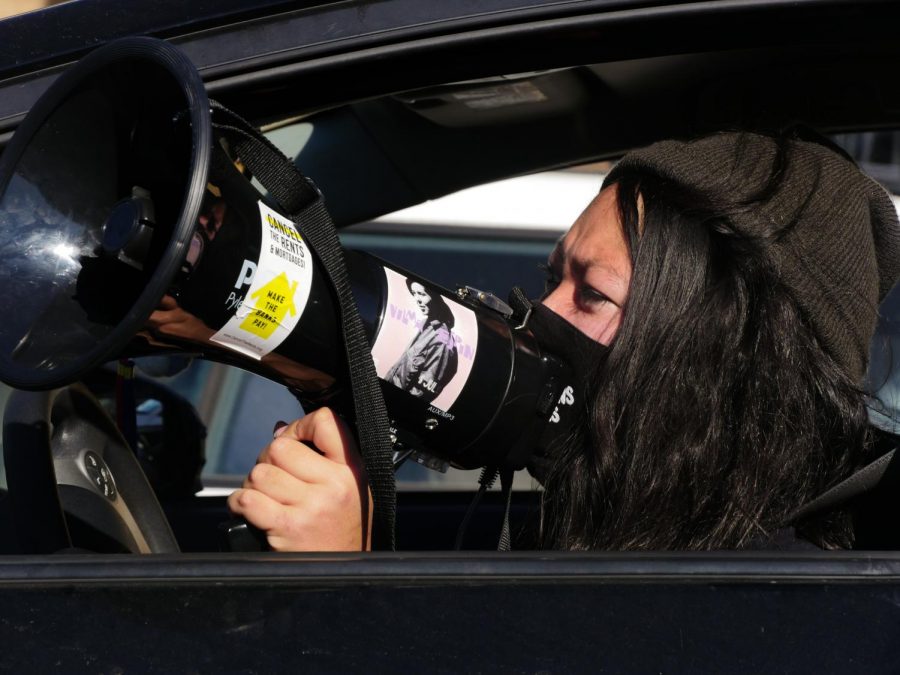 An activist speaks through a bullhorn during the car caravan protesting for the unhoused community on Monday, Jan. 18, 2020.

The event was organized by several prominent Los Angeles activist groups, including Los Angeles Community Action Network and Street Watch L.A., which are dedicated to fighting homelessness in the city.

The cars gathered at Skid Row before the caravan drove to MacArthur Park and then to Hollywood. The event was a car caravan rather than a march to obey L.A. County’s social distancing guidelines.

Homelessness activist groups in L.A. have called for more meaningful action to help unhoused communities for several years. During the COVID-19 pandemic, their calls have become especially cogent as the respiratory illness ravages through homeless shelters and encampments and the County continues street sweeping.

These street cleanings, which the Centers for Disease Control and Prevention has cautioned against, force homeless encampment residents to pack up their belongings, temporarily move to a different location and return later.

During the event, General Dogon, an organizer from L.A. CAN, spoke to the crowd while holding what he said was a copy of the L.A. homelessness budget. Activists are against the budget because it puts too much money into street cleaning and the police instead of intuitive solutions that value life over property.

“This budget is not our budget, this is their budget. So we can burn their budget,” said Dogon, before he lit the pieces of paper on fire.

King was known as a champion of nonviolent activism, which has become a hotly-contested topic within activism. Many groups, such as the Los Angeles chapter of Black Lives Matter, employ nonviolent methods. However, law enforcement, including L.A. County Sheriff Alex Villanueva, have called protesters anarchists.

Two weeks before the activists gathered on Monday, California pastor Sean Feucht and other evangelical Christians — many without masks — held an “outreach” event on Skid Row. They distributed food to some residents, but most of the attendees mainly sang and played music on speakers until late into the night.

Homelessness activist groups feared that Feucht’s event could be a “super spreader” event among Skid Row’s vulnerable population and staged a vehicle blockade at the site of the event.

Monday’s protest ended at Vine Street and Lexington Avenue in Hollywood — the site of a homeless encampment that has experienced weekly cleanups. A resident at the encampment, Hal, spoke to the crowd.

“We are your neighbors,” Hal said. “We are people. We have talents and dreams and aspirations, just like anyone who has a house. Our only sin is that we’re poor, and you want to hold that against us?”