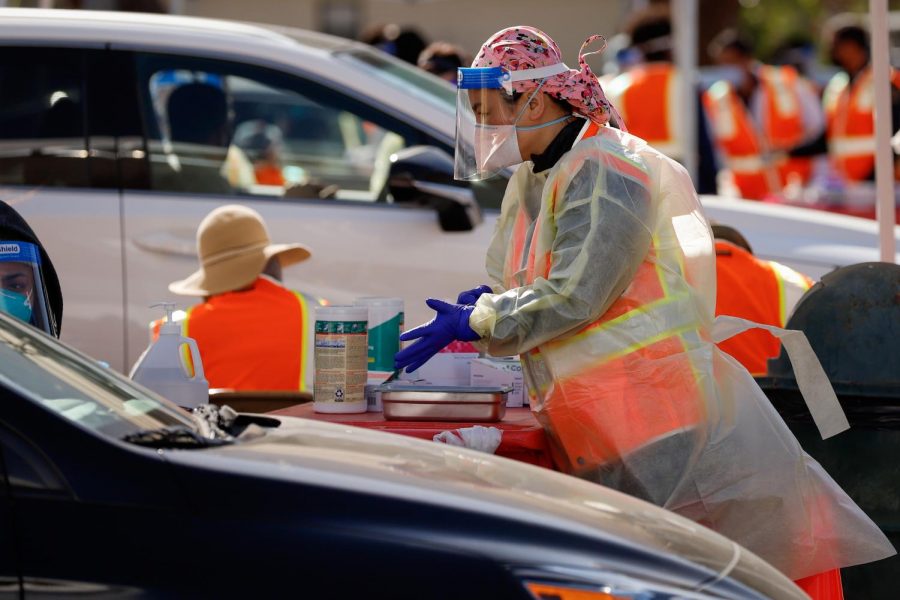 A worker at the CSUN COVID-19 vaccine distribution site prepares to administer a vaccination on Tuesday, Jan. 19, 2021. Vaccinations are issued to the recipient while they are sitting in their car.

COVID-19 vaccines were administered at CSUN today just days after Los Angeles County announced the campus as a distribution center.

The Pfizer vaccines were only given to healthcare workers, who were required to make an appointment and show documents to verify their eligibility. Approximately 2,400 people made appointments to receive the vaccine and all appointment slots were taken according to the site’s public information officer, Kenichi Haskett .

The large number of people with appointments today led to administrators asking everyone to show up no earlier than 30 minutes before their appointment time.

“When people show up 2-3 hours early to their appointment, it completely backs us up and slows down the process,” added Haskett.

Cars first lined up at the check-in area at the corner of Plummer Street and Etiwanda Avenue before proceeding to designated areas in parking lots B1 and B2 where they received their shot.

Once patients were vaccinated, they were asked to wait 15-20 minutes before leaving so that healthcare professionals could make sure patients were not experiencing side effects from the vaccine.

According to Pfizer’s clinical trials, their vaccines have an efficacy rate of 52% after the first dose and 95% after the second.

In California, vaccine distribution is organized into tiers and phases, giving priority to healthcare workers.

L.A. County announced on Tuesday that residents above the age of 65 would be able to make an appointment to receive a vaccine, this week. However county health officials are unsure how many doses the County will receive next week.