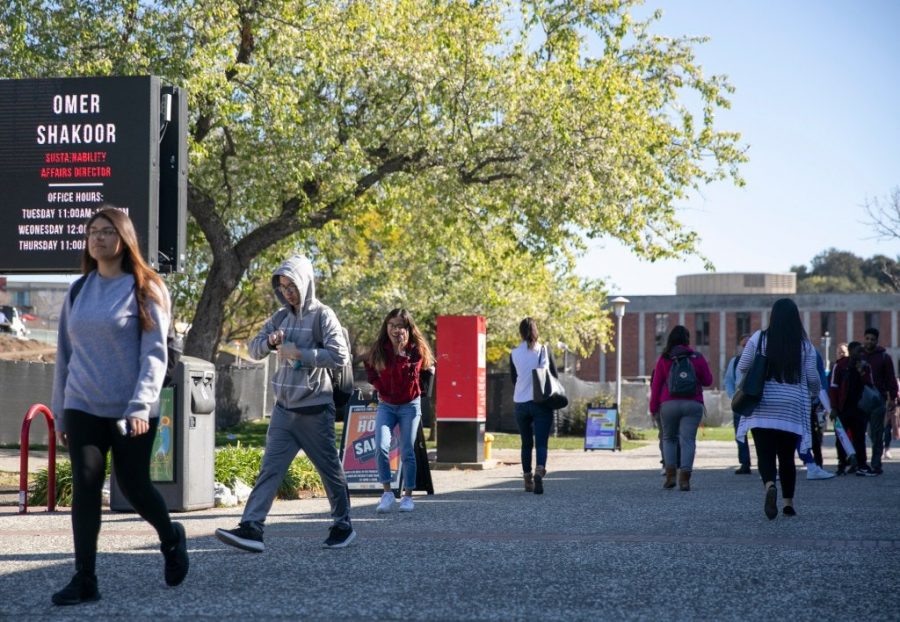 Students at California State University can look forward to at least one thing next school year: Chancellor Joseph Castro says no tuition increases. Photo by Anne Wernikoff for CalMatters

LONG BEACH—California State University students will not see their tuition rise for the upcoming 2021-22 academic year, promising rare good news for the system’s nearly 500,000 students battered by a year like no other.

“I want to make sure all of our students hear that, and all the students that are thinking about the CSU hear that: No increase in tuition for 2021-22,” said new Chancellor Joseph Castro during the bimonthly CSU Board of Trustees meeting Tuesday afternoon.

It’s the first time the CSU has committed itself to such a goal for 2021-22, continuing a decade-long trend in which the system raised tuition only once, most recently a $270 hike in 2017-18.

Gov. Gavin Newsom’s January budget proposal includes a 3% increase in ongoing funding to the CSU, but with conditions, including keeping tuition flat. The proposed increase — about $145 million — is still about half of the amount that state lawmakers and the governor lopped off from the CSU in the current state budget they approved last year.

Though CSU’s finances took a hit during the COVID-19 pandemic, federal aid partially shored up CSU losses. The system reported losses and increased costs of more than $758 million in Spring and Fall 2020. Federal relief, known as the CARES Act, sent the system $262 million and an equal amount to its students for emergency aid. The most recent federal relief package is expected to mete out even more aid to the system, about $854 million, according to a CalMatters review of federal data. At least $262 million of that is supposed to go to students as emergency aid grants.

Castro also vowed to protect CSU employees and faculty, saying that “if our assumptions for state and federal support hold,” he will not support a systemwide furlough program and “do everything we can to avoid additional layoffs of permanent CSU staff or faculty due to a lack of state funds.” About 130 workers were laid off this month belonging to the system’s largest staff employee union, a spokesperson for CSU Employees Union confirmed.

The pause on spiking tuition is a far cry from the last time California endured a recession, when tuition doubled in a few short years after state funding plunged as a result of the 2007 Great Recession.

But student tuition is only one portion of the total cost of attending the CSU. While current tuition stands at $5,742, each campus is free to raise mandatory campus fees, which range from $901 at Fresno State to $4,329 at Cal Poly San Luis Obispo. Unlike systemwide tuition, mandatory campus fees have been rising annually, sometimes by hundreds of dollars at a time, since 2011-12. While the CSU Board of Trustees has the authority to raise systemwide tuition, campus presidents set campus fee rates. At two Cal States, mandatory campus fees more than doubled in the past decade. Some campuses were faulted for not following protocol in setting campus fees, a state auditor found last year. In several cases, campuses failed to consult with key groups or explain why they needed the fee increases.

That Castro promised to hold systemwide tuition steady matches his reputation for minding costs as former campus president of Fresno State, where mandatory fees are the lowest in the system and have risen only $110 in the past decade.

At least one campus, Humboldt State, plans to keep their mandatory campus fees flat, spokesperson Grant Scott-Goforth said over email. The campus releases its fee updates in March or April.

Castro also doubled down on the CSU reopening most of its classes in the fall for in-person learning, which may sweeten the pot for students to continue to enroll at CSU. While nationally enrollment at four-year universities cratered, Cal State and the University of California have maintained their enrollments during the pandemic.

The president of the CSU faculty union sounded less thrilled about in-person instruction. During public comment at the Trustees meeting, California Faculty Association President Charles Toombs said the system must address matters such as vaccines, sanitation protocols, the ability to continue teaching remotely, and more.

Public health will guide the CSU’s decisions about in-person learning in the fall, Castro said. “If the course of the virus, the data, vaccine availability and the medical and public health experts indicate that our planning approach is no longer feasible, we will adjust.”

This story is published in conjunction with the California State Journalism Newswire and CalMatters.