Men’s basketball falls to UC Davis 75-63 due to turnovers, lack of energy 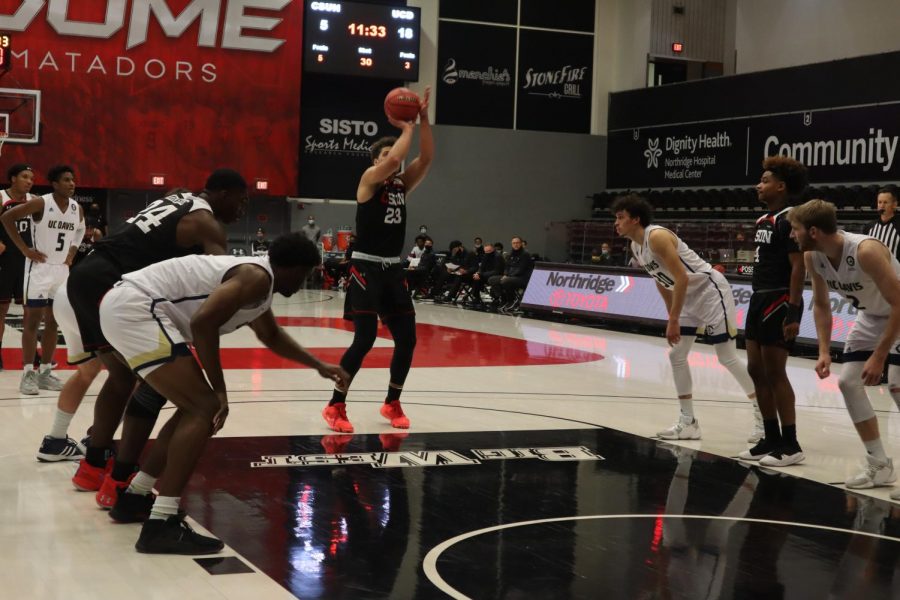 Freshman forward Alex Merkviladze, shoots a free throw in the first half of CSUN's second game against UC Davis on Saturday, Feb. 6, 2021. The Matadors lost 75-63.

CSUN men’s basketball looked screened and trapped in their second face-off against UC Davis this week. Although CSUN defeated UC Davis in their previous matchup on Friday, they started slow on Saturday with multiple turnovers and missed opportunities that proved too big to overcome.

UC Davis forced many of the Matadors’ turnovers and also outrebounded them on both sides of the court as the Aggies jumped out to an early 8-0 lead. The Aggies continued to build their lead, which at one point was as high as 21 points. CSUN’s low effort and energy in the first half allowed the Aggies’ offense to get anywhere they wanted on the court, and their missed shots allowed UC Davis to have the ball in their hands for most of the first half.

“You got to give [UC Davis] credit. They bounced back after yesterday and they played really well,” head coach Mark Gottfried said. “They made a lot of shots and so you got to tip your hat to them.”

The Matadors played well in the second half and brought themselves within reach, but it was too late for them to win.

“I don’t think we put as much effort as we did last game,” said freshman forward Alex Merkviladze. “So I think that was the main issue we had.”

Although this game resulted in a 75-63 loss for the Matadors, they did manage to outscore the Aggies 39-44 in the second half.

“I thought our energy in the second half was phenomenal,” Gottfried said. “Although in the first half it was really poor.”

Gottfried also said that there is a possibility of having a matchup with  Long Beach State and UC Irvine, as both teams have a bye week at the same time as CSUN.

CSUN now has a 7-8 overall record and is 3-5 in conference play.