AS update: Upcoming event gives students an opportunity to talk to President Beck 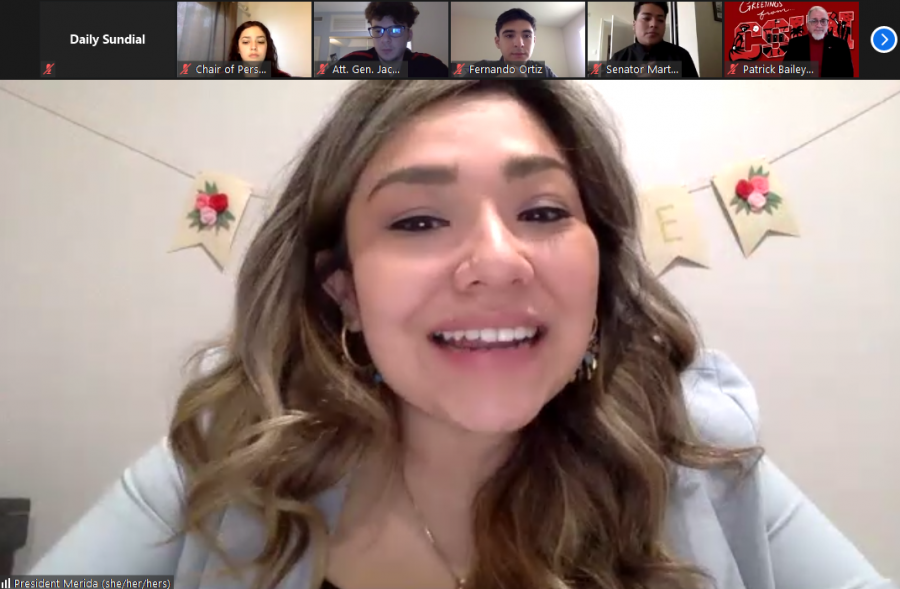 AS President Rose Merida announced “An afternoon with President Beck,” a virtual event that allows students the opportunity to ask questions to President Erika D. Beck and share their experiences as a CSUN student on Feb 15.

The event will be held at 3 p.m. and limited to the first 250 students that register online.

Beck continues her 100-day listening tour with student organizations. She will be hosting a “Meet the Presidents for Clubs and Organizations” event on Wednesday, where student leaders will have the opportunity to share their experiences as a CSUN student leader.

Under the new business section of Monday’s meeting, the AS Senate appointed a senate representative for the Associated Students Elections committee and a new senator for the College of Health and Human Development.

Senator Denise Nguyen nominated Senator Kavya Dhyasani as the representative for the Elections Committee, which facilitates the annual Associated Students elections that happen during the months of March to April. Dhyasani accepted the nomination and the motion passed the senate with a unanimous vote.

A position for senator of the College of Health and Human Development has been open since last semester and Fernando Ortiz, a tourism, hospitality and recreation management major, applied for it the second time after noticing that the position was still vacant.

The motion to appoint Ortiz passed the senate with a unanimous vote.

There was also a motion on the agenda to suspend Section IV. A of the 2020-2021 Standing Rules of the Associated Students in order for Senator Ortiz to be able to continue his employment with AS Productions as a producer.

Senator Ronnie Medrano, who is also a producer for AS Productions, went through a similar process at the first AS Senate meeting this semester. The suspension of this section prevents a conflict of interest in the event an AS Productions matter comes before the senate. If it does, Ortiz and Medrano will abstain from voting.

AS Welcome Back Giveaway Week will be held from Monday to Friday this week.

Every day, there will be two videos on the AS Instagram page, highlighting a different AS department and their services. In each video there will be a secret word to listen for. Students can submit their answer to enter the raffle via a link. Each correct word entered will count as an entry. There will be a daily prize and a grand prize, which will be raffled at the end of the giveaway at Friday noon.