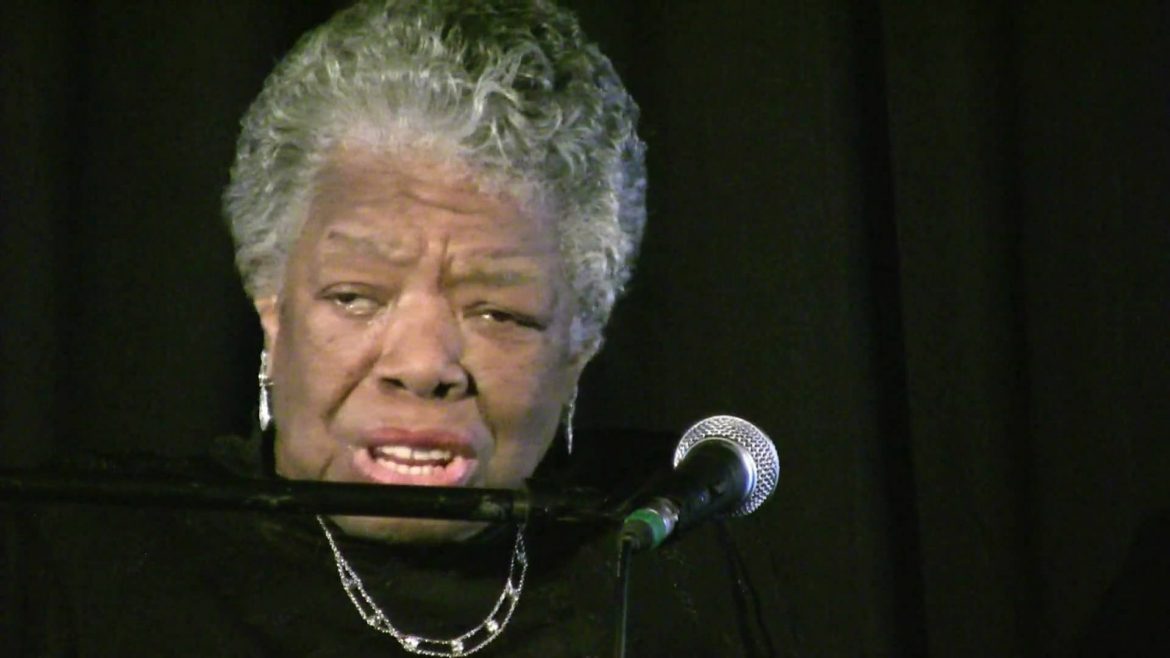 No one is born with courage, but we are all born with the ability to be courageous, was the first of many messages part of Wednesday night’s lecture “An Evening with Dr. Maya Angelou.”

Angelou spoke at the Matadome to a packed crowd of about 2,300 students and faculty. The University Student Union (USU) and Associated Students (A.S.) sponsored the lecture.

Dorothy Barresi, a professor in the English department and a poet/critic introduced Angelou to a crowd of thousands.

Angelou received a standing ovation from the crowd and opened by singing a piece from a 19th century slave song based on a passage from Genesis, of when God put a “rainbow in the sky” to give hope of seeing light in the clouds.

That piece from the slave song inspired her to come to Northridge, Angelou said, for a third time in twenty years because “Northridge in itself is a rainbow in the clouds.”

CSUN is a place where many people represent the first person in their family to come to college, Angelou said. She also spoke of the rich diversity and the ancestry of students that reaches form Eastern Europe to India and Asia.

“You have already been paid for. Once you’ve internalized that, you’ve been liberated. Pay for someone else,” Angelou said.

The night was also full of laughter, “I never trust people who don’t laugh. Who say ‘I am so serious.’ I don’t know if they are serious or boring,” Angelou said laughing, which she said she loves to do.

An essay contest sponsored by the USU giving students a chance to attend a meet and great with Angelou before the lecture.

Kathryn Donahue, 22, a senior journalism major, was one of the winners of the essay contest who got a chance to meet Angelou.

“I learned about the contest on the website and found out on Monday that I had been won. The prompt for the essay asked about what advice we would give a younger version of yourself,” Donahue said.

“It was hard to write 500 words or less, but I basically said to myself that you wont get everything right, but that it’s not the point,” Donahue said. “It’s just as important to trust yourself when you’re wrong. Not about how you fall in life but about the strength of how you rise up.”

Donahue said getting a chance to meet with Angelou was a tremendous honor and that once in a high school survey that asked what famous person she’d like to meet, she had written Angelou.

Jessica Samiere, 21, junior Pan-African studies major, was also one of the essay contest winners. She had chosen the writing prompt that asked what work of Angelou’s had inspired her and why.

Samiere wrote about Angleou’s poem, “Phenomenal Woman,” because it had “inspired me t be strong and realize how to build off of inner beauty. I found some of my characteristics in that poem.”

Although nervous to meet what she said is one of her idols, Samiere prepared a letter for Angelou telling her how much she appreciates the work she has done and how she inspires her.

Associated Students (A.S.) President Abel Pacheco, who presented Angelou with a gift on the behalf of the university at the end of her lecture, said, “It was a great opportunity for students to be inspired by one of the most remarkable figures in history.”

Yamrot Amha, an environmental and occupational health major, was unable to enjoy the lecture as she had hoped to do.

“Everything went smoothly, the turnout was really amazing and students really liked it,” Younna said. “The collaboration with the USU just showed how when we all put our resources together, we are able to have great events.”

“I really liked it. I thought it was cool to see someone like her here at school. She was very funny,” Kristina Richman, English creative writing major, said. “I think what she wanted is to take away is the idea that each of us can be our own rainbow.”

Angelou told the crowd “we’re in a particularly challenging place now in our country.”

She said she loved looking at the people in the crowd and knowing that someone in that audience will help find the answer to prostate cancer or breast cancer or help teach the world something new.

“You are the best we have, you are it, and we need you so desperately. Adults don’t tell you enough how much we need you,” Angelou said. “I see you and I see the future in you.”