Far from home: Inside Lamine Diane’s pursuit of his NBA dream 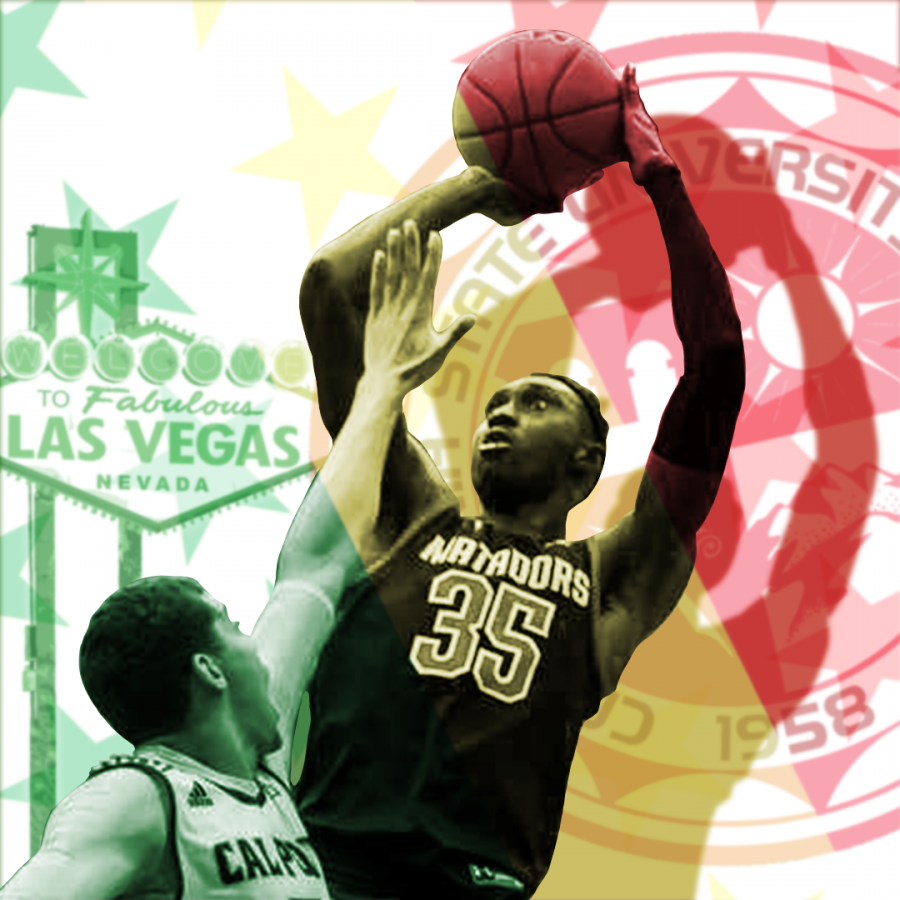 He remembers the day perfectly.

Andy Johnson, then head basketball coach of Findlay Prep, pulled up to McCarran International Airport in Las Vegas to pick up his newest player. Out walked Lamine Diane, a lanky 17-year-old, fresh off an 18-hour flight from his home of Dakar, Senegal.

Johnson figured Diane would be hungry, but there was one problem: Diane didn’t speak any English. Johnson had to ask if he was hungry by rubbing his stomach and pointing at his mouth. Diane nodded. Johnson drove to the nearest In-N-Out.

“That was his first meal in America,” Johnson said before letting out a slight laugh. “We Americanized him really quick.”

But even after taking his first bite of the West Coast’s most iconic burger, Diane was still a stranger in a strange land more than 6,000 miles from home. He didn’t know anybody, didn’t know the language and didn’t know how to communicate with his new peers. However, Diane knew what he signed up for and he had zero doubt in his mind he was making the right move.

“That’s what I wanted to do,” Diane said. “To come to America, that was the whole purpose.”

Diane grew up around basketball as his father, Keletigui Diane, played for the Senegalese national team. Despite growing up around the game and his constant presence at his dad’s practices in his youth, Diane was initially drawn to another sport.

He, like many kids in Africa and around the world, loved soccer.

“When you’re born, that’s one thing you’re going to do first,” Diane said. “It’s really big out there.”

Diane didn’t pick up a basketball until he was nine years old, when a friend encouraged him to try out for Giving Back, a basketball academy in Dakar. He didn’t care too much about the tryout, he just picked up the ball and started playing. At one point, Diane made a reverse layup. He found out he made the team by the next day.

Diane still balanced his time between basketball and soccer. It wasn’t until he turned 12 that he realized he was a much better hooper than soccer player, so he quit his first sport to prevent any unnecessary injuries. Diane started to realize how far he could go, and he didn’t want to risk anything that could jeopardize it.

With his full focus on basketball, Diane took off over the next few years. He raised eyebrows at the NBA’s Basketball Without Borders camp in 2014, where he caught the attention of prep schools, including Findlay. After getting an offer to play for the Pilots and finding out about how many players they sent to the NBA — a long list that includes Tristan Thompson, Avery Bradley, Christian Wood and Bol Bol — Diane didn’t hesitate to take the opportunity.

“Guys that came there got better,” said Rodney Haddix, former Findlay Prep head coach, who was an assistant coach during Diane’s time with the team. “Whether you were a McDonald’s All-American or you were a kid just trying to be seen. Everybody that came there, got better.”

The first couple months at Findlay were a struggle for Diane. His coaches could see his talent, but the language barrier hindered his ability to learn schemes and interact with his teammates. Tutors would spend up to two hours every night with him to work on learning English. He also found other ways to learn English — watching cartoons. A coach suggested it would help him adapt to the language and pop culture, and it sure did.

A combination of being around the team, the tutors, and The Simpsons, slowly began to pay off as Lamine became able to have full-blown conversations in English.

“He was talking and interacting with everybody like he lived here his whole life,” Johnson said. “When the English piece connected with his basketball talent, he took off.”

Haddix mentioned he felt like Diane first stepped up in his junior year during the Hoophall Classic, a high school basketball showcase that annually features the top prospects in the nation. Findlay played against Athlete Institute, which featured future NBA player Thon Maker, and St. Benedict’s Prep.

Diane played in limited minutes off the bench, though he played a bigger role against Athlete Institute due to one of the starters getting into foul trouble. According to Haddix, Diane handled the situation well and “guarded his butt off.”

Haddix realized that Diane could play defense at an elite level, it also served as the first indicator at how good of a player he could develop into.

Diane blossomed in his high school senior season. He went from averaging just over eight points per game as a junior to averaging 17.5 points. His rebounds increased to 6.5 per game compared to 3.2 the previous year. Diane also got more assists, steals and blocks per game.

As his game improved, so did his confidence. Diane wasn’t the quiet, shy kid anymore. He carried himself differently, he started talking trash and had the numbers to back it up. Those numbers caught the attention of some of the biggest schools in the country, which came as no surprise, since that was what Findlay was known for.

Diane had significant interest from Baylor and Missouri, though other schools were hesitant to recruit him due to academic concerns. Despite the interest from a couple of significant Power Five schools, Diane surprised a few by signing his letter of intent to play for CSUN.

“Usually kids that go to Findlay Prep don’t come to Northridge,” said Terrell Gomez, Diane’s former teammate at CSUN who was part of the same recruiting class. “I assumed he must’ve been one of the players on the team that didn’t play much … like, you either didn’t play that much or get that much opportunities, or he must’ve just been overlooked. And he really was just overlooked.”

Gomez first realized Diane’s talent during their first practice with the Matadors when they were running one-on-one drills. Diane blew by his matchup, soared to the rim and jammed a cradle dunk. That was his first preview of his teammate for the next three years.

While Gomez raised his eyebrow when he heard about Diane committing to CSUN, the move made perfect sense to his Findlay coaches. They felt Diane would thrive in a school that could build their system around him. If he had gone to a Power Five school like Baylor or Missouri, they felt that Diane wouldn’t have gotten the same kind of attention he needed to develop into a professional.

“He always had an alpha mentality. The way he played, the way he went about things it was always, ‘He’s the man,’” Haddix said. “So him choosing somewhere smaller was going to put him in a position where he could go and play right away.”

Reggie Theus, then head coach at CSUN, banked on this mentality. He knew he could bring Diane in and build a system around him that would showcase his skills. Diane wasn’t a great shooter, but he made up for it almost everywhere else on the court. Theus knew that style of play could thrive in the Big West.

Diane got hit with a setback before his college career could even begin when he had to redshirt his freshman season after injuring his thumb.

Theus wouldn’t stick around to see Diane play for the Matadors as he was fired after the team went 6-24 on the year and 3-13 in conference play.

When Mark Gottfried arrived as the next head coach, he did not know much about Diane. But he learned quickly just how talented the forward was.

His assistant coach, former UCLA head coach Jim Harrick, watched film from Diane’s prep days when he played at the 2016 Adidas Nations camp. Harrick sat back in his chair and yelled,“Holy mackerel!”

Diane played two seasons for Gottfried, during which he piled up awards and records seemingly every game. He was Big West Player of the Year twice, Big West Freshman of the Year, Newcomer of the Year, All-Conference, All-District and Honorable Mention All-American.

Diane is ninth on the Matadors’ all-time scoring list and the quickest to score 1,000 points in school history — just 40 games. He also tied the school record for most blocks in a game and led the Matadors to clinch the second seed in the Big West tournament, which was ultimately canceled due to COVID-19.

“I think he’s the greatest player to ever put on a CSUN uniform,” Gomez said.

Though many, including Gottfried and Harrick, share Gomez’ view, Diane doesn’t. Despite the awards, the records and the hype, instead he focused on the things he didn’t accomplish.

“The only thing I was trying to do, me and my teammates, was trying to win the Big West Conference and go to the tournament,” he said. “And we did not do that.”

In Diane’s two seasons, the Matadors never finished above .500. They got off to a particularly rough start in 2019-20, when Diane missed the first 12 games of the season due to being ruled academically ineligible. CSUN went 2-10 during that stretch.

Diane declared for the NBA Draft shortly after his redshirt sophomore season was cut short. It was an unusual year for a prospect like Diane, who was considered on the fringe of being drafted or not.

In a normal year, a fringe prospect would have opportunities to showcase himself in front of teams at the NBA Combine, pre-draft camps, individual workouts with teams and the Summer League. In a year ravaged by a pandemic, there was none of that.

Diane sat at home on Nov. 18, his eyes glued to the TV as he watched the NBA Draft and his future unfold. Pick after pick went by, but there was no mention of his name. Finally, NBA deputy commissioner Mark Tatum came to the podium to announce the final selection.

“With the 60th pick in the 2020 NBA Draft, the New Orleans Pelicans select Sam Merril…”

“I didn’t think it was going to go like that,” he said. “But what happened, happened. I just have to go through it.”

However, it didn’t take long for Diane to get picked up. He signed an Exhibit 10 contract with the Philadelphia 76ers on Dec. 3, though he was waived four days later.

Rather than start his professional career on the big stage in the NBA, Diane will be playing in a small world in the G League Orlando bubble for the Delaware Blue Coats, the 76ers’ G League affiliate. He made his debut on Feb. 11, where he played 12 minutes and he scored three points, blocked two shots and grabbed two rebounds.

The G League isn’t the first adverse situation that Diane has found himself in and if history is any indicator, it’s not the last one he’ll overcome.

“Being strong mentally. That’s the only thing I can do,” Diane said. “Hard times are going to come regardless, so you just got to go through it.”